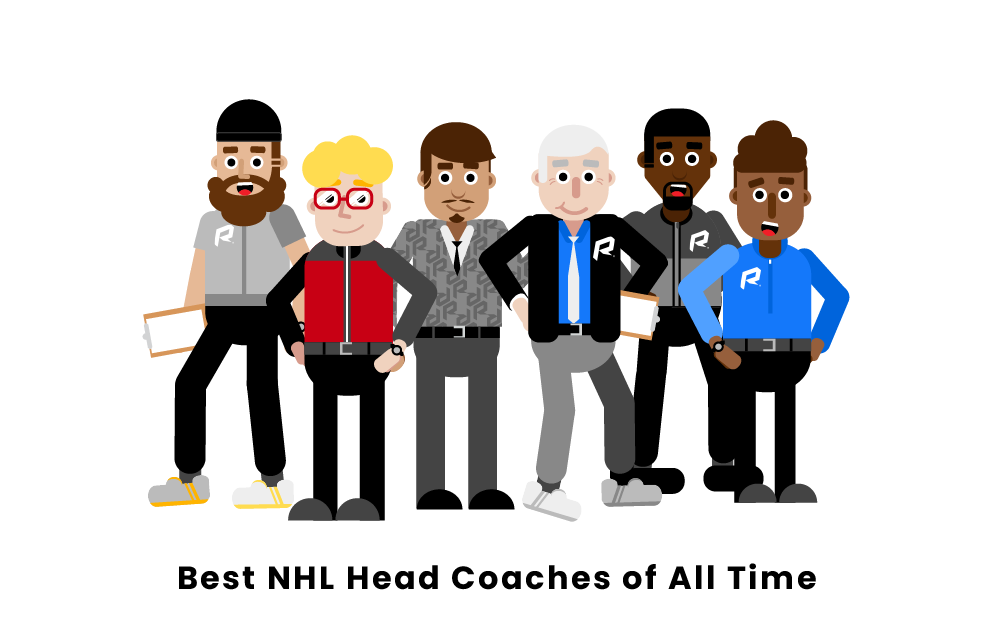 The battle for the best all-time legacy as a hockey bench boss is fierce: many coaches steered franchise teams through the 1900s, while still more are attempting to revolutionize the sport nowadays. Many have held the crucial job of coaching an NHL team, with a few standing out among the rest. Read on to learn about the top six best NHL head coaches of all time.

Who are the best NHL head coaches of all time?

Scotty Bowman was born in September of 1933 in the Canadian province of Quebec. He began his coaching career in 1956 with the Ottawa-Hull Canadiens in the Quebec Junior Hockey League. In 1958, his team won the Memorial Cup.

Bowman’s next coaching gig was with the Peterborough Petes of the Ontario Hockey League. He then went on to coach five different NHL teams from 1967 to 2002: the St. Louis Blues, Montreal Canadiens, Buffalo Sabres, Pittsburgh Penguins, and Detroit Red Wings.

Joel Quenneville is the only coach to win three Stanley Cups with the same NHL team in the salary cap era, which began in 2005-06. He did so with the Chicago Blackhawks, who were led by Jonathan Toews, Patrick Kane, and Duncan Keith.

When Quenneville played in the NHL, he was on the Maple Leafs, Rockies, Devils, Whalers, and Capitals. Quenneville was an NHL coach for the St. Louis Blues, Colorado Avalanche, Chicago Blackhawks, and the Florida Panthers.

Al Arbour is most well-known for his time spent coaching the New York Islanders. He did not coach as long as some of the other coaches on this list did, but he had major success when he did. From 1980-1983, Arbour and the Islanders won four straight Stanley Cups, a feat that has yet to be repeated. Arbour coached the New York Islanders from 1973 to 1986 before taking some time off from coaching. He resumed his coaching career in 1988, reclaiming his job with the Islanders. The most notable performance in his second stint with the Islanders came in 1992-93 when they defeated the top-ranked Pittsburgh Penguins in a series that stretched to overtime in game seven. Arbour coached one more season after that, eventually retiring in 1994. He was elected to the Hockey Hall of Fame in 1996.

Blake also earned exactly 500 regular-season wins as coach of the Montreal Canadiens, the most of any coach with a single NHL club. He was elected into the Hockey Hall of Fame in 1966.

James Dickinson Irvin Jr., better known as Dick Irvin, was an NHL hockey player who had to retire due to repeated injuries. Regardless of his early retirement, Irvin was inducted into the Hockey Hall of Fame in 1958 as a player. After retiring, Irvin pursued a career in coaching. Irvin coached the Blackhawks, Maple Leafs, and Canadiens. In his coaching career, Dick Irvin won four Stanley Cups: one with the Maple Leafs and three with the Canadiens. He finished his career with 691 wins as a coach, placing him 11th on the all-time wins list.

Ken Hitchcock is a former NHL player and coach. He coached the Dallas Stars, Philadelphia Flyers, Columbus Blue Jackets, St. Louis Blues, and Edmonton Oilers. Hitchcock also was an assistant coach on Team Canada during the 2002, 2010, and 2014 Olympics. Hitchcock won one Stanley Cup during his coaching career in 1999 with the Dallas Stars.

Hitchcock’s fame largely stems from his longevity in the league: Hitchcock racked up the third-most ever wins as an NHL coach with 849. Hitchcock also was a 2019 recipient of the Order of Hockey in Canada, an award that honors pioneers in Canadien hockey.

Who is the best NHL head coach of all time?

Scotty Bowman is generally recognized as the greatest NHL head coach of all time, although Joel Quenneville and Al Arbour each also have notable legacies. Bowman holds numerous NHL coaching records. Bowman is the leader in regular-season wins, playoff wins, and Stanley Cups as an NHL coach. Bowman also had coaching success before even making it to the NHL, winning the Memorial Cup all the way back in 1958.

What NHL head coach has won the most Stanley Cups all time?

What NHL head coach has won the most games all time?

Scotty Bowman has won the most NHL games as head coach of all time. Bowman has 1244 regular-season victories as an NHL head coach, while no other NHL head coach ever reached 1000 victories. Joel Quenneville ranks second in all-time wins, with 969. The third most regular-season wins by a head coach is 896 by Barry Trotz, who is still an active NHL coach. Trotz has a chance to beat Bowman’s record, as Trotz is just 59 years old.