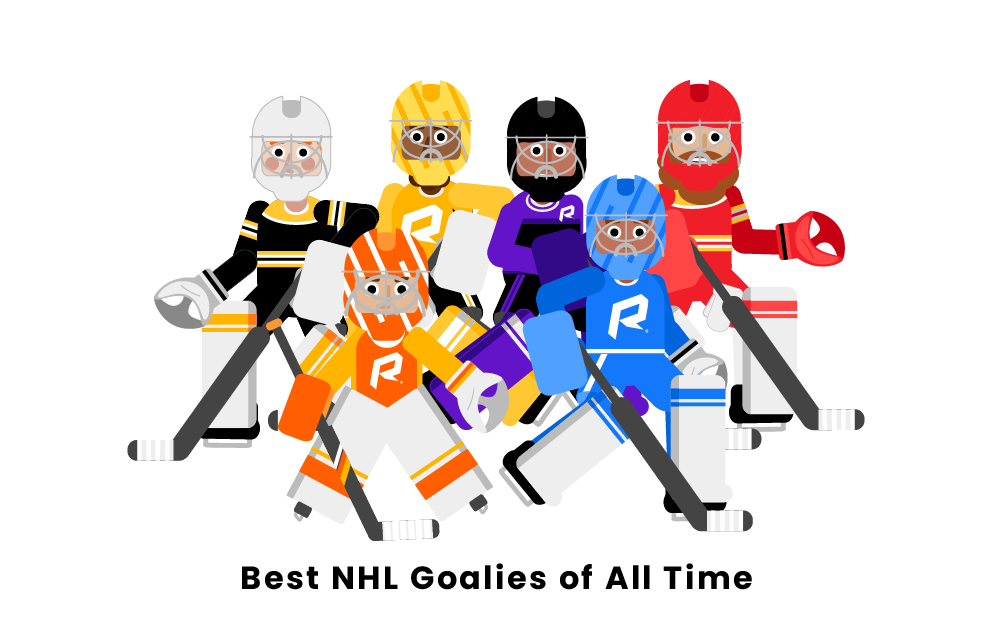 Ice hockey is a sport that requires decisiveness, timing, and above all, precision. The NHL is full of players with the ability to shoot the puck wherever they please, making the position of goaltender one of the hardest in all of sports. Over the century-long existence of the league, there have been goalies who have dazzled the sport with their skills. Below are some of the best goalies in the history of the NHL.

Who are the best NHL goaltenders of all time?

Despite Patrick Roy’s retirement being nearly twenty years ago, his legacy is still mentioned when talking about the best goaltenders to ever play in the NHL. Roy played 19 seasons, entering the league in 1985 and splitting his time between the Montreal Canadiens and the Colorado Avalanche, winning two titles with each franchise. During his playing time, Roy appeared in 11 all-star games and in five of those seasons led the league in fewest goals allowed. Roy boasts an impressive feat of 551 wins while logging a save percentage of .910 in the process. While putting up these impressive numbers, he simultaneously popularized the butterfly goaltending technique which quickly became the preferred strategy for goalies. His laundry list of accolades has made Roy one of the most talked about and respected names in the history of the NHL.

There is no refuting that Martin Brodeur is the best goalie to play in the NHL in the last decade. Brodeur came into the league in 1991 as a goalie for the New Jersey Devils, playing 21 seasons for the Devils before playing his final season for the St. Louis Blues. During his career, Brodeur was a nine-time all-star and an MVP nominee for three of those years. Brodeur is at the top of many statistical categories for goalies, such as wins, shutouts, saves, and games played. Not only does Brodeur have individual greatness, but he has found team success in the process. Brodeur is a three-time Stanley Cup champion, capturing all three of his championships with the Devils and cementing his legacy as one of the most iconic of any goaltender.

Dominik Hasek’s track record is quite easily one of the most impressive the NHL has ever seen. Hasek has won six Vezina Trophies, second all-time and first under the current award format. Hasek also has two Hart Memorial Trophies, which are awarded to the most valuable player in the NHL. The greatness Hasek showed was especially eye-catching due to his unorthodox methods as a goalie. Hasek would flail his body around with recklessness and agility, showing instincts never seen before in the NHL. This style of goaltending earned Hasek two Stanley Cups with the Detroit Red Wings and allowed him to be celebrated as an all-time great.

Terry Sawchuk came into the league and immediately became a force to be reckoned with. Sawchuk played every game of his first two seasons, an unheard-of accomplishment in the modern NHL. A poll at the turn of the century voted Sawchuk to be the greatest goalie the league has ever seen, with the public praising his drive and love for the game. Many of his records stood until the end of the 20th century, but most hockey fans still consider his statistics to be the most impressive. His competitive nature got the better of him before the 1970 season, and a scuffle with one of his teammates ultimately caused his death and served as an abrupt ending to an iconic career.

Jacques Plante was a player who achieved a lot of “firsts” during his 16-year career. Among these firsts is Plante’s equipment decision, which changed the course of hockey forever. After an injury that required 21 stitches to his face, Plante returned to the sport donning a protective face mask. While initially slandered for the mask, modern hockey now requires every goalie to wear a mask, thanks to Plante’s choice. Plante also managed to win a Hart Trophy in the process, an incredibly difficult task for a goaltender. Although retired for nearly 50 years, Plante is still talked about due to his revolutionary play and playoff greatness.

Ken Dryden’s career is one of the biggest “what if’s” in sports history, considering he left the sport of hockey after just eight seasons. Despite stepping away before his prime, Dryden put up historic numbers such as a save percentage of .922 and 258 wins in less than 400 games played. Dryden was a five-time all-star, leading the NHL in wins in four of those seasons. Although gifted, Dryden clearly had a passion for law and retired two separate times to pursue a career relating to law. Dryden prioritized his career goals, but many fans dream about what more he could have done with a full NHL career.

Tony Esposito’s greatness was quiet, but it is undeniable how dominant Esposito could be. While guarding the net for the Chicago Blackhawks, Esposito had a .906 save percentage and raked in winning season after winning season. Esposito had a unique mindset, typically being harsh on himself and never allowing himself to be satisfied with his play. It was not unusual for Esposito to blame himself for goals that were in no way preventable. This way of thinking allowed Esposito to be the stone-cold legend the league adored. He also took immense pleasure in playing his brother Phil, a long-time Bruin who gave him troubles every time they faced each other.

Bernie Parent’s legacy is forever stamped into the list of NHL legends, as his run of dominance is still discussed by hockey fans. Parent’s performance in the mid-1970s is unforgettable, at one point having a save percentage of .933 for the 1973-74 season. His two Stanley Cup wins coming in succession proved to cement his greatness not just in the history books of Philadelphia sports, but in the NHL as a whole. Unfortunately, his wonderful career was cut short due to a stick that went array and caught Parent in the eye. This injury sidelined him long enough for Parent to finally hang up the skates, but not before creating a Hall of Fame career for himself.

Glenn Hall worked harder than any goalie in NHL history. Hall would play way more than the average goaltender, doing so without a mask against some of the best players in the history of the game. Hall was the original pioneer of the butterfly style of goaltending, and is often talked about by the older generation of hockey players as the greatest goalie ever to play the game. Everything about Hall was different, including his in-game behavior. His bench would have a vomit bucket for him which would be used consistently every game, a common occurrence for the rest of Hall’s playing days. At the end of his two-decade-long career, Hall had won two Stanley Cups and had become a legend of the sport.

What NHL goalie has the most saves of all time?

Martin Brodeur is the all-time NHL save leader with 28,928 saves. Roberto Luongo is the only other goalie to reach the 28,000 save threshold, as the next closest goalie is Patrick Roy is 25,800. Brodeur also has faced the most shots in NHL history, tallying a total of 31,709. Brodeur’s greatness is proven through his ability to stop shots, a skill that led him to one of the best careers in NHL history.

What NHL goalie has the most Stanley Cups?

There is a three-way tie between Jacques Plante, Ken Dryden, and Charlie Hodge for the most Stanley Cup wins by a goaltender. All three goalies won six Stanley Cups during their playing career, all of these titles being with the Canadiens, with Plante and Dryden being the starting goalie in each of their championships. Hodge was the backup for a handful of his wins, but stuck around long enough to win as a starter during the 1960s.

What NHL goalie has the most points of all time?

Tom Barrasso has the record for most points by a goaltender with 48 points, all of these points being assists. Barrasso played for six different teams over 19 seasons, winning back-to-back Stanley Cups with the Pittsburgh Penguins and earning recognition as one of the finest American goaltenders in NHL history. Brodeur is just one point behind Barrasso with two goals and 45 assists, but since Brodeur has since retired, Barrasso’s lead is safe for a long time.

Pages Related to Top 6 Best NHL Goalies of All Time