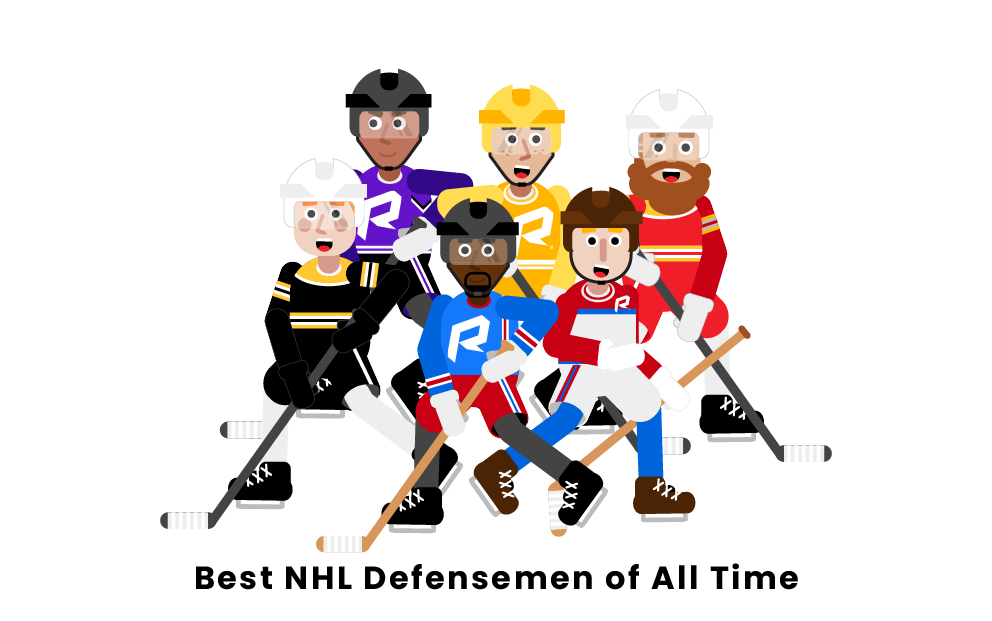 Playing defense in the NHL is one of the most challenging things to do in all sports, requiring fast reflexes, impeccable skill, and a willingness to do the dirty work needed to prevent the other team from scoring. The NHL has had no shortage of talented defensemen, and this list will highlight the best of all time.

Who are the best NHL defensemen of all time?

Bobby Orr is one of the most talented players ever to lace up a pair of skates; a two-time Stanley Cup winner (1970, 1972), a seven-time NHL All-Star, and a prolific enough scorer to lead the league in hat tricks during the 1974-1975 season. Orr was a dominant defenseman for the Boston Bruins and the Chicago Blackhawks during his 12-year career in the pros; he found immense individual success during his career, racking up numerous accolades and awards, and was finally enshrined into the Hockey Hall of Fame as part of the 1979 class.

Ray Bourque is one of the best NHL players ever to play defense at the professional level; he averaged 68.7 points per season for his career and held the record for the most points ever for an NHL defenseman with 1,579 total. Bourque's 23-year career in the pros from 1979 to 2001 was spent playing with the Boston Bruins and the Colorado Avalanche. During this time, he managed to be named to 19 NHL All-Star Games, win five James Norris Memorial Trophies, one King Clancy Memorial Trophy, one Calder Memorial Trophy, and a single Stanley Cup win in 2001.

Nicklas Lindstrom was one of the best defensive players of his generation, and his 20-year tenure with the Detroit Red Wings saw him prove this to the NHL. Lindstrom was a dominant force on the ice, evident by his 12 NHL All-Star Game selections and seven James Norris Memorial Trophies for best defenseman. Lindstrom not only found individual success during his career but also team success, with four Stanley Cup trophies collected during his time in the pros. Nicklas was eventually rewarded for his hard work in 2015 when he was enshrined in the Hockey Hall of Fame.

Doug Harvey was one of the biggest game-changers for the defensive position due to his ability to incorporate a blend of offense and defense into his defenseman role. His career was studded with accolades, including seven James Norris Memorial Trophies for best defenseman, 1,113 games played, and 540 points accumulated during the incredible 19-year career playing with the Montreal Canadiens, New York Rangers, Detroit Red Wings, and the St. Louis Blues. Harvey was eventually inducted into the Hockey Hall of Fame in 1973 and still holds the record for most Stanley Cup wins by a defenseman with six total.

Paul Coffey was one of the most prolific players to ever skate as a professional. The 21-year career that saw him play for eight separate NHL teams included numerous accolades and records that he set. Not only was Coffey able to win Stanley Cups with two separate teams, winning three with the Edmonton Oilers and one with the Pittsburgh Penguins, but he also set an unprecedented 33 NHL records during his tenure in the pros. Among these records, the most impressive is his record for the most goals by a defenseman in the regular season and playoffs combined, with 455 over his career.

Denis Potvin played in the NHL for 15 years as a defenseman for the New York Islanders and quickly was able to cement himself as one of the best players not only in the league, but of all time. Potvin won three James Norris Memorial trophies, four Stanley Cups, and a Calder Memorial Trophy during the 1978 season as well. His ability to anchor a defense and contribute on offense made him invaluable to his team during his tenure, and this skill was shown when Potvwin broke Bobby Orr's record for career goals by a defenseman, retiring with 257.

Larry Robinson played in the NHL for 20 years and split his time between the Montreal Canadiens and the Los Angeles Kings, where he became one of the best defensemen of all time. Not only did Robinson find some of the most successful years ever seen for defensemen, with six separate Stanley Cup Championships and three James Norris Memorial Trophies, but he also won the Conn Smythe Trophy during the 1977 season. By the end of his career, Robinson was not only named to the Top 100 NHL Players of All Time, but to the Hockey Hall of Fame as well in 2014.

Chris Chelios was the epitome of a hard worker, and his NHL record of 26 seasons played is matched by only Gordie Howe for the longest time spent in the pros. His 266 career playoff games played is also an NHL record. During his time in the pros, he played for five separate teams and won three Stanley Cups; two with the Chicago Blackhawks in 1992 and 1995 and one with the Montréal Canadiens in 1988. Chelios also won three James Norris Memorial Trophies and the 1996 World Cup of Hockey with Team USA, a feat only overshadowed by his Hockey Hall of Fame Enshrinement in 2013.

Brian Leetch played in the NHL for 18 years and on three separate teams, including the Toronto Maple Leafs and the Boston Bruins, but he is best known for the 17 years he spent with the team that drafted him, the New York Rangers. Labeled by some as the "Greatest Ranger of All Time," Leetch lived up to the hype, winning Rookie of the Year, two James Norris Memorial Trophies, and a Stanley Cup for the team that drafted him. One of Leetch's most iconic moments came when he became the first American NHL player ever to win the Conn Smythe Trophy, following the 1993-1994 season.

Who is the best defenseman in NHL history?

Bobby Orr is the best defenseman in NHL history; his stats speak for himself. He has an impressive resume that includes two Stanley Cups, seven NHL All-Star selections, and seven James Norris Memorial Trophies he collected over his 12-year-long career. His eventual enshrinement into the Hockey Hall of Fame in 1979 is even more of a reason to put him at the top of the list and earn him the label of the most outstanding defenseman in NHL history.

Which defenseman has won the most Stanley Cups?

Doug Harvey holds the record for the most Stanley Cup wins for a defenseman with six total. He was one of the biggest game-changers for the defensive position. His ability to incorporate a blend of offense and defense into his position was never seen before and allowed him to set the NHL on fire during his career, which spanned from 1945 to 1969, included time with four different teams, and included seven James Norris Memorial Trophies.

Which defenseman has the most points of all time?

Ray Bourque holds the most points ever for an NHL Defenseman with 1,579 total points. He amassed this record during his 23-year career in the pros with the Boston Bruins and the Colorado Avalanche. Bourque averaged a mind-boggling 68.7 points per season for his career and collected over 90 points during a season four separate times. His most incredible season came during the 1983-1984 season, where he had 96 points in only 78 games played.

Pages Related to Top 6 Best NHL Defensemen of All Time