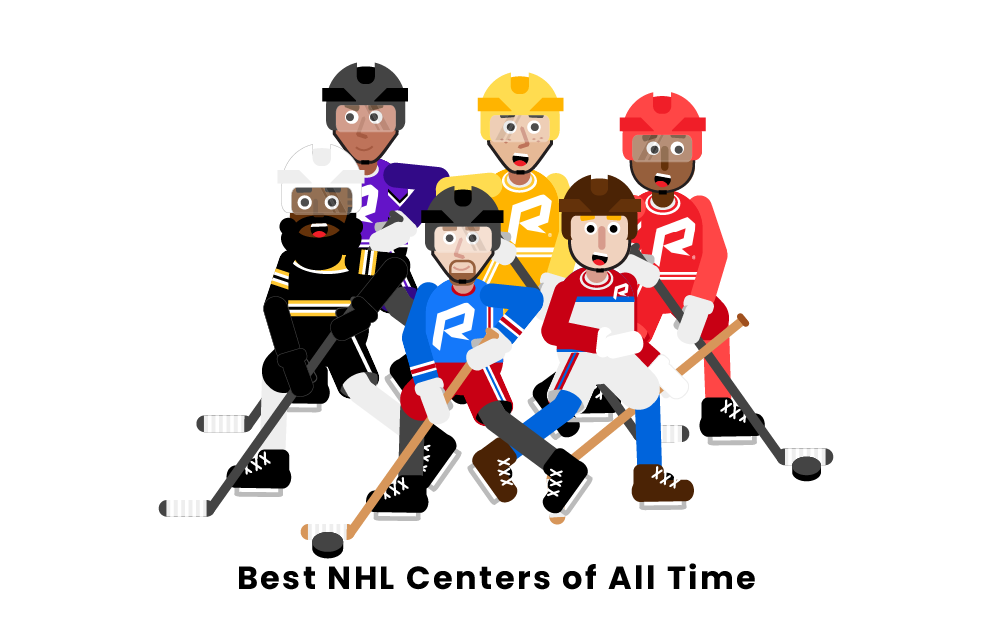 The center position is the most versatile position in hockey. This player is responsible for not only producing points, but also serves as the “third defenseman.” Below is a list of the NHL’s greatest centers of all time.

What are the best NHL centers of all time?

Wayne Gretzky is widely regarded as the greatest player of all time. His statistical dominance is simply off the charts. The Canadian had four 200-point seasons. Nobody else even has one. He also won a league-record nine Hart Trophies and is one of just two players (Mark Messier) to win the award with multiple teams. Gretzky also was a key contributor in breaking up the New York Islanders dynasty in the early 1980s, when his Edmonton Oilers beat them in five games in the 1984 Stanley Cup Finals. Gretzky’s greatness is still recognized today, as his number (99) is the only number retired league-wide.

Mario Lemieux played all 915 games in a Pittsburgh Penguins uniform and saved the franchise not once but twice. The year before the Penguins drafted Super Mario in 1984, average attendance fell below 7,000, but by 1990 it was up to 16,000. From 1997 to 2000, Lemieux suffered severe health problems, which took three prime years off of his career, and Pittsburgh filed for bankruptcy in 1998. However, Lemieux helped ensure the team stayed in Pittsburgh by unretiring and becoming a part-owner of the team. He was a box office attraction, and if it weren’t for injuries and health problems, he could’ve had an even better career.

Mark Messier is widely considered one of the greatest leaders in the history of sports. Until 1988, Messier was often overshadowed by his teammate, Wayne Gretzky. The duo won four Stanley Cups together, but Gretzky received most of the credit. However, Messier led the Oilers to another Stanley Cup in 1990 without Gretzky while also capturing the Hart Trophy that season. Then, Messier helped snap the New York Rangers’ 54-year Cup drought in 1994. Arguably his defining moment came in that year’s conference finals against the New Jersey Devils. Facing elimination and heading into the final period down 2-1, the captain scored a hat trick in the third period to send the series back to New York for a game seven.

Often overshadowed by his legendary teammate, defenseman Bobby Orr, Phil Esposito is arguably the NHL’s greatest pure goal scorer. In 1971, Esposito set a then-record with 76 goals in one season and led the league in goals six years in a row during the 1970s. During the 1970 playoffs, Esposito led his team in both goals and assists en route to his first Stanley Cup. Then, in 1972, the Canadian tied with Orr for the team lead in points during its postseason run to capture another Stanley Cup.

The Montreal Canadiens currently have the most Stanley Cups (24) out of all NHL franchises. The man that’s responsible for nearly half of them is Jean Beliveau. Beliveau’s ten Stanley Cups trail only his teammate, Henri Richard (11), for the most championships won by an individual player in NHL history. The center finished his career with over 1,200 points and was over a point-per-game for his career. However, his signature moment came in the 1969 Semifinals against the Boston Bruins when he scored his only career playoff overtime goal in game six to send his team to the Stanley Cup Finals.

Steve Yzerman burst onto the scene in 1984 as a rookie, finishing second in Calder Trophy voting and leading his team to the playoffs for the first time in six years. However, Yzerman couldn’t break through for a long time despite spectacular individual seasons and overall teams. In 1996, Yzerman’s Wings finished with a league record 62 wins in the regular season, and he even scored the game-winner in game seven against the St. Louis Blues to move his team into the conference finals. However, the Red Wings fell to the Avalanche in six games. The following year, Detroit exacted revenge on Colorado in the same round as the previous season, then Yzerman finally hoisted the Stanley Cup after sweeping the Philadelphia Flyers.

In 20 seasons, Joe Sakic was over a point-per-game in 17 of them, but it’s not his regular-season success that defines the Avalanche captain. Rather, it was his knack for coming up big as the moment got bigger. Sakic’s eight playoff overtime goals are an NHL record, and he’s also got the third most game-winning goals (19) in postseason history. Sakic was the catalyst of two championship teams and his biggest moment came for the latter one, in which he recorded a goal and an assist in game seven of the Stanley Cup Finals against the New Jersey Devils.

The duo of Bryan Trottier and Mike Bossy is arguably the greatest in NHL history, as their games seamlessly complemented each other. Trottier’s best attribute was his playmaking ability, while Bossy is regarded as one of the greatest pure goal scorers of all time. As a result, the two led a dynasty as the New York Islanders won four-straight Stanley Cups from 1980 to 1983, and appeared in another in 1984. Trottier moved on from New York after the 1990 season and captured another two championships with the Pittsburgh Penguins in 1991 and 1992.

The Chicago Blackhawks have a long list of great NHL players, but arguably the best of them all is Stan Mikita. The Czech native is currently the only player in league history to win the Hart Trophy, Art Ross Trophy, and Lady Byng Trophy in the same season, doing so in 1967 and 1968. Mikita spent his entire 22-year career with the Blackhawks, leading them to the Stanley Cup five times and capturing one in 1961. He’s Chicago’s all-time leader for both regular-season games played (1,394) and postseason games played (155).

Who is the best center in NHL history?

The greatest center of all time is Wayne Gretzky for his statistical dominance and career achievements. Gretzky is the NHL’s all-time leader in goals and assists and led the Edmonton Oilers dynasty in the 1980s. He and Jackie Robinson are the only major American professional sports athletes to have their numbers retired for their respective leagues.

Which center has won the most Stanley Cups?

Henri Richard holds the record for the most Stanley Cups for a center and an individual player with 11. Richard was a part of the Montreal Canadiens dynasty in the 1950s and 1960s and also won two championships in the 1970s. Richard spent 20 years in the NHL, and in over half of them, he hoisted the Stanley Cup in the end.

Which center has the most points of all time?

Center Wayne Gretzky has the most points in NHL history, with 2,857 across 20 seasons. Nobody else has even reached 2,000. In fact, if Gretzky never scored a goal in his career, he'd still be the all-time points leader as he accumulated 1,963 assists.

Pages Related to Top 6 Best NHL Centers of All Time