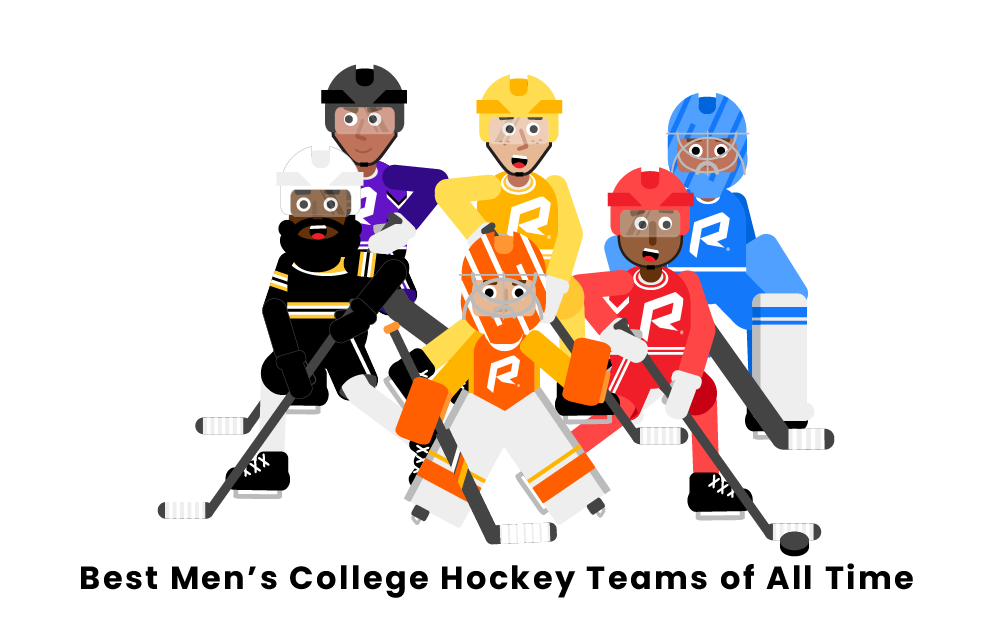 On a seemingly perpetual rise in popularity, ice hockey is a sport where competition is as steep at the collegiate level as in the professional leagues. Listed below are the six best men’s college hockey programs of all time (and a few honorable mentions) in this divisively competitive category.

What are the best NCAA men’s hockey programs of all time?

The University of Michigan men’s ice hockey team, popularly known as the Michigan Wolverines, is one of the best collegiate programs in the sport’s history. Though they earned their varsity status in 1922, the Wolverines’ first appearance and win in an NCAA tournament championship was in 1948. Over the next fifty years, the Wolverines set the record for most Division I NCAA Men’s Ice Hockey National Championships with their ninth win in 1998 against Boston College. From 1991 to 2012, the team also played a record 22 consecutive NCAA Tournaments. As of 2022, the Wolverines also hold the record for most titles at the Great Lakes Invitational, with 17 total titles.

The University of Denver men’s hockey team, aka the Denver Pioneers, has featured arguably the best group of players in the past decade. In 1958, they won their first national championship as an independent school against the North Dakota Fighting Sioux. Over the next six decades, the Pioneers made a total of 18 NCAA Frozen Four appearances and won 15 regular-season conference championships. In 2022, the team won their ninth national championship against the Minnesota State Mavericks. This feat tied the Pioneers with the University of Michigan for most Division I NCAA Men’s Ice Hockey Championships, a record previously held alone for over twenty years.

The University of North Dakota hockey program, currently known as the Fighting Hawks, has a rich and successful history encompassing almost seventy years. In 1959, the team played their second and won their first national championship against the Denver Pioneers. They were known as the Fighting Sioux during those early years, but that name was changed in 2012 to its current name. Since their first national appearance in 1958, the Fighting Hawks have won 15 WCHA regular-season championships, appeared in the Frozen Four 22 times, and won eight NCAA Division I Men’s Hockey Championships.

The Wisconsin Badgers men’s ice hockey team represents the University of Wisconsin-Madison and has one of the best overall records in the history of the sport. As a result of NCAA recruiting violations committed by the Denver Pioneers, the Badgers’ first NCAA championship title was in 1973 by vacation. In 1977, they won their first national title through competition and won again in 1981, 1983, 1990, and one final time in 2006 against the Boston College Eagles. This last win gave the team a remarkable record of six NCAA Division I Championship wins.

The Minnesota Golden Gophers men’s team represents the University of Minnesota and has one of the oldest and most historic records in collegiate ice hockey. In 1929, they shared a National Intercollegiate Athletic Association championship with Yale. Though they were runner-up for the NCAA Division I Championship in 1953, the Golden Gophers did not win their first national title until 1974. In 1976, 1979, 2002, and 2003, they repeated the feat for a total of five NCAA national championship wins. As of 2022, they have also won 16 conference tournament titles and made 22 appearances at the NCAA’s Frozen Four.

The Boston University men’s ice hockey team, known informally as the Boston University Terriers, has a history that is over one hundred years old. In 1950, they made their first appearance in an NCAA Frozen Four but lost the ultimate title against the Colorado College Tigers. Over twenty years later, in 1971, they won their first national championship against the Minnesota Golden Gophers. They successfully defended their title the next year and also won in 1978, 1995, and 2009, making five national championship wins. Currently, they have won 16 conference regular-season championships and made it to the NCAA Frozen Four 22 times as of 2022, with their most recent appearance in 2015.

Since playing their first season in 1917-1918, one of the top collegiate ice hockey programs has been at Boston College. Their men’s hockey team, the Boston College Eagles, participated in their first NCAA Frozen Four in 1948 and won their first national title the next year against the Dartmouth Indians. For over fifty years, the Boston College Eagles made many more Frozen Four appearances but did not win the final series of games again until 2001. With national successes also in 2008, 2010, and 2012, the team holds five NCAA Division I Men’s National Championships.

The Michigan State Spartans men’s ice hockey team represents Michigan State University and has a historic rivalry with the great Michigan Wolverines. Forty years after their first game, they won their first national title in 1966 against the Clarkson Golden Knights. With two further wins in 1986 against the Harvard Crimson and in 2007 against the Boston College Eagles, the Spartans hold three Division I NCAA Men’s Ice Hockey National Championships. They also have made 11 NCAA Frozen Four appearances and won the second most titles (12) at the Great Lakes Invitational.

The Maine Black Bears men’s ice hockey team represents the University of Maine and is a historic member of the Hockey East conference. In 1987, they made their first NCAA tournament appearance. A year later, they made it to their first Frozen Four. In 1993, the Maine Black Bears won their first national title against the Lake Superior State Lakers in a series of 11 games. Six years later, they won a second NCAA Division 1 Championship against the New Hampshire Wildcats in an epic 3-2 overtime shot. As of 2022, they hold 11 NCAA Frozen Four appearances and five conference tournament championships.

What men’s college hockey team has won the most National Championships?

The record for the most Division I NCAA Men’s Ice Hockey National Championships is actually shared by two teams. In 1998, the Michigan Wolverines won their ninth national championship against Boston College, fifty years after their first. In 2022, the Denver Pioneers also won their ninth national title by winning against the Minnesota State Mavericks, effectively tying the record set by the Michigan Wolverines almost thirty years prior.

What men’s college hockey team has the all-time record for most NHL 1st-round draft picks?

The men’s college hockey team with the most NHL 1st-round draft picks of all time is the University of Michigan Wolverines. With the pick of Owen Power by the Buffalo Sabres in 2021, the Wolverines have a record 31 1st-round draft picks. This is especially impressive given the second-highest record, held currently by the University of Minnesota Golden Gophers, is nine picks fewer at 22.

Can a player who has been drafted by the NHL play college hockey?

Yes, a player who has been drafted by an NHL team can still play college hockey, though there are a few provisions. Firstly, a collegiate hockey player may continue with the current as long as no contract has been signed and nothing has been sent to the player, such as hats, jerseys, or other team signifiers unless paid for by the student-athlete. If either rule is broken, they are ineligible to play on a college team.