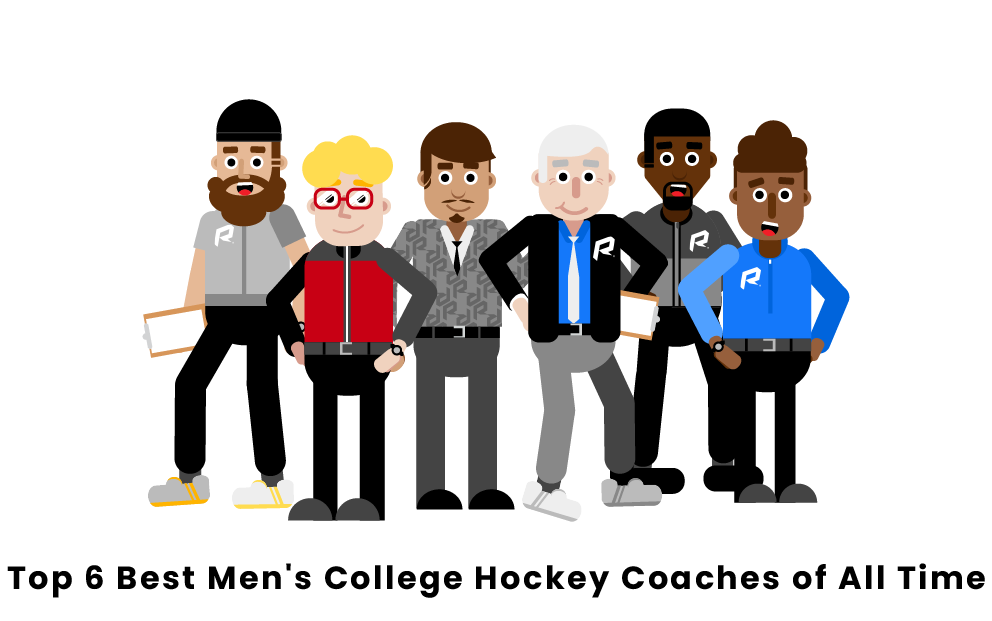 College hockey is one of the most intense environments in all of sports. Players are young and hungry, looking to make it to the NHL, and willing to do whatever it takes to get there. To be successful at the collegiate level, these young prospects rely on their insightful coaches to turn them into stars. Below are the six best men’s college hockey coaches of all time.

Who are the best men’s NCAA hockey coaches of all time?

Herb Brooks’s name is one of the most recognizable in hockey history because of his accomplishments at every level of the sport. Brooks got his coaching beginnings at the University of Minnesota, where he captured three national championships in eight years for his home state team. Brooks finished his time there with 192 wins, an incredible feat for someone who spent far less time in collegiate hockey compared to other legendary coaches. After his coaching at the collegiate level, Brooks took over for the United States Olympic Team in 1980. This team is most commonly known as the iconic “Miracle on Ice” team that captured one of the most impressive gold medals in Olympics history, solidifying Brooks’ legendary coaching status in the process.

Bob Johnson is one of the most notable names in hockey, thanks to his long-lasting success in the sport. After three years at Colorado College, Johnson took over at the University of Wisconsin, where he would remain for 15 seasons and amass 367 wins in the process. After winning three National Championships, Johnson took his coaching abilities to the NHL, where he coached the Calgary Flames during the 1980s. After his stint in Calgary, Johnson coached one season for the Pittsburgh Penguins and won the Stanley Cup in the lone 1991 season he had with them. Johnson passed away the very same year he won the Stanley Cup, but not before he blessed the game with decades of championship pedigree.

Jerry York has become one of the most iconic names in all of hockey, coaching since 1972 and building a legendary resume spanning five decades. York got his start with Clarkson College, where he was the youngest coach in the nation and was eventually recruited by Bowling Green. York took over for 15 years, capturing a National Championship and quickly becoming a hockey legend. York’s career was far from over, eventually taking over Boston College for the next 28 years and winning four National Championships. York retired after 50 seasons of coaching, finishing with 226 more wins than the next-winningest coach.

Armstrong’s loyalty was second to none, taking the head coach position for the University of Denver in 1956 and coaching them until 1977, when he retired. During his time at Denver, Armstrong was a dedicated coach who expected nothing short of excellence from his players, which resulted in one of the best college athletic programs of all time. Armstrong captured 463 wins, all with his Denver squad, using his knowledge as a former player to become one of the first legendary coaches in the history of college hockey. After retiring in 1977, Armstrong was given the Lester Patrick award for his service to the sport and was elected into the Denver Athletics Hall of Fame soon after.

Jack Parker served Boston University for 40 years as their head coach and retired as one of the best coaches in the history of the sport. Parker’s greatness was consistent, only having seven losing seasons in the four decades he spent coaching Boston University. His 897 wins represents the record for most wins with one school, a testament to his coaching excellence that led to him eventually being recruited to coach the United States Men’s National Team. Parker was inducted into the Boston University Athletics Hall of Fame in 1994, an astonishing two decades before Parker retired. Parker’s greatness was not only undeniable, but it was long-lasting.

Ned Harkness did not coach nearly as long as some of the others on this list, but he achieved legend status in his two decades of coaching collegiate hockey. Harkness took over a struggling RPI hockey program, and after five years of coaching them, the team won its first national championship in 1954. This gave Harkness a load of notoriety which eventually landed him his job at Cornell, where he finished off his collegiate career and added two more National Championships to his resume. Harkness did not limit his abilities to just hockey, as he coached men’s lacrosse at RPI and Cornell, eventually becoming the first coach to win a National Championship in two different sports.

Which college hockey coach has the most wins?

Jerry York holds the record for most wins in the history of collegiate hockey, with an outrageous 1123 wins. It took York 50 years to reach their achievement, and he gave himself a cushion of 226 wins in the process, enough to put him far ahead of any active collegiate coach. Jack Parker is in second place on this list with 897 wins, impressively all with one team, Boston University.

Which college hockey coach has won the most NCAA Championships?

The record for most NCAA Championships in men’s hockey is shared by two quintessential winners, Jerry York and Murray Armstrong, each with five. York got his five championships over 50 years, claiming one with Bowling Green and the rest coming with Boston College. York’s championships spanned decades, winning his first in 1984 and his last coming in 2012. Armstrong found his success with the University of Denver, winning all of his championships before 1977 and setting the bar to an insurmountable height for his predecessors.

Which college hockey coach has coached for the most seasons?

Jerry York holds a plethora of collegiate hockey records, one of which being the most seasons coached in college hockey. York suited up for 50 seasons, only ending with a losing record in 11 of those seasons. Longevity benefited York, as the bulk of his winning came at the back end of his career. York won four of his five championships in the 21st century, proving that sticking around for five decades was the right move for his career.