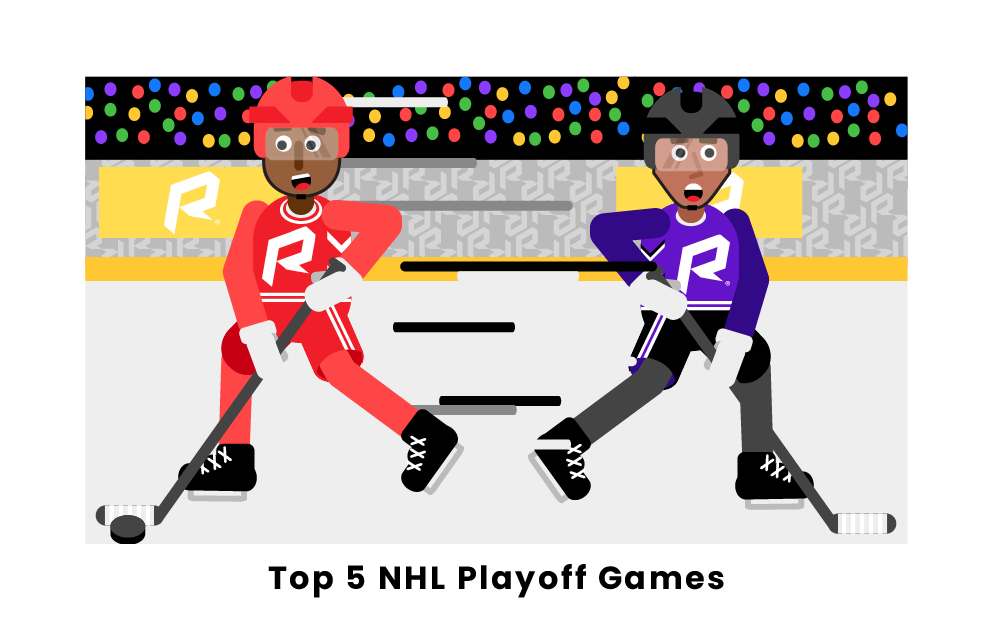 What are the most well known NHL playoff games?

The Los Angeles Kings and the Chicago Blackhawks have had a rivalry in the NHL for many years, and both teams had earned a respectable amount of Stanley Cups in the past. From 2009 to 2014, the Blackhawks and Kings had won five out of six Stanley Cups. The 2014 Western Conference Final was the tipping point for the six-year-long rivalry. Game five of the playoff series went into double overtime, and game seven also went well over the regulated time for an average playoff game. This game saw the Blackhawks carry out a strong lead, but by the time the game tied and went into overtime, Jarret Stoll ended up scoring the winning goal for the Kings. The LA Kings ended up just beating the Blackhawks in overtime in game seven, allowing them to advance to the Stanley Cup Finals.

Game seven of the 2011 Stanley Cup final led to a huge breakout of riots in the streets of Vancouver due to the outcome of the game. The Boston Bruins versus the Vancouver Canucks was a memorable event because of the tough loss the Canucks endured that night. The Bruins had won the game 4-0 with two of the four goals made by Brad Marchand. This game was the first time the Boston Bruins had won a Stanley Cup Championship since 1972. The riots that took place after this game are what make it so memorable. The riots took place on July 15, 2011, when jerseys of both teams were set on fire along with overturned vehicles on the streets.

This playoff series featuring the New York Rangers and New Jersey Devils had fans on the edge of their seats. In game five, the Devils had beaten the Rangers, leaving the Rangers trailing 2-3 in the series. Rangers captain Mark Messier promised the New York press that the Rangers would make up for the tough loss and guaranteed a win in game six. Messier did not disappoint, as he scored a hat trick in the game, sending both teams into game seven with a tied score. Game seven ended up going into double overtime, where the Rangers finally defeated the Devils after a goal scored by Stephane Matteau. The Rangers eventually went on to defeat the Vancouver Canucks in the Stanley Cup Finals, ending a 54-year Cup drought for the Rangers.

This was game six of the Stanley Cup Finals, where the Colorado Avalanche played against the New Jersey Devils. The Devils were the defending Stanley Cup champions but were defeated by the Avalanche in a 2-1 win which was only the second Stanley Cup in franchise history. Defenseman Raymond Bourque crying while lifting the cup in victory is remembered as one of the most iconic moments in NHL history because of the pure release of happiness shown on Bourque’s face. He had played for the Boston Bruins for most of his career but was never able to bring a cup home to Boston. Bourque shortly retired after this team victory because he felt that he had achieved everything he wanted to during his hockey career.

During this seven-game series in the 2009 Eastern Conference semifinals, both the Pittsburgh Penguins and Washington Capitals put up a tough fight. The most exciting game was game two of the series, in which both Sidney Crosby and Alexander Ovechkin had completed hat tricks. Crosby and Ovechkin had scored a total of 8 goals each during the series. However, the Capitals Steckel’s goal pushed them over the edge to win game two. Two different team members completing a hat trick during one playoff game is extremely unique, which is why this playoff game is so memorable. The Penguins ended up winning the series 4-3 with a 6-2 rout in game seven. The Capitals and Penguins both put up great fights during the series and proved to be worthy opponents of each other.

What are the Stanley Cup Playoffs?

The Stanley Cup playoffs is an elimination-style tournament where four rounds of best of seven games are played to determine the league champion. There are two conferences, East and West, from which eight teams each will qualify for the playoffs.

The 2019 NHL playoffs featured eight teams from the Eastern and Western Conferences.

What are the top 4 teams that have won the most Stanley cups?