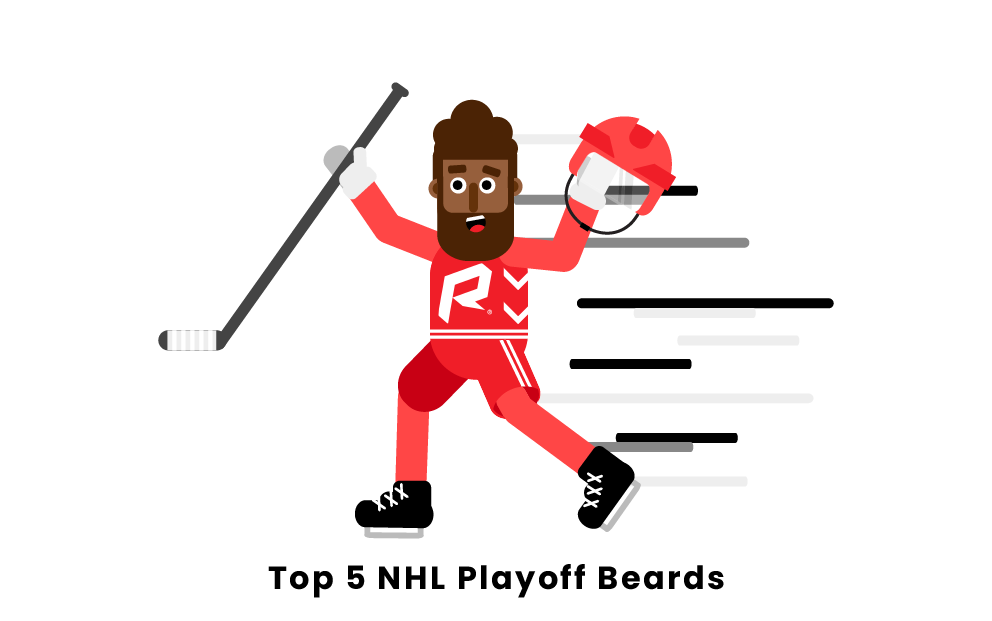 A popular tradition amongst hockey players in the NHL is to grow out their beards for the duration of the NHL playoffs as a form of superstition and in hopes of garnering some good luck. Legend has it that shaving a playoff beard can pose catastrophe for the player’s team. Read on to learn about the most famous NHL playoff beards of all time.

Who had the most famous NHL playoff beards?

Lanny McDonald and his famous mustache had a long career in the NHL. Over the course of 18 seasons, he played for three teams: the Toronto Maple Leaves, the Colorado Rockies, and the Calgary Flames.

Although he was famous for his mustache, he decided to complement it with a playoff beard when the Calgary Flames went to the NHL Playoffs in 1989. This also happened to be his final season with the NHL. McDonald definitely went out in style since, in his last game, he won the Stanley Cup Finals while sporting his impressive facial hair.

After retiring, he stayed with the Flames as their VP. He also later got inducted into the Hockey Hall of Fame for his achievements in the NHL. In addition to this feat, many devout hockey fans still remember McDonald as the hockey player with the best facial hair of all time.

Brent Burns is a versatile hockey player who’s played as both a defenseman and a forward. He is well-known in the NHL for his wild beard and hair. Burns actually used this fame to raise over $23,000 for charity in 2013. He asked fans to donate money to Defending the Blue Line and the Katie Moore Foundation in exchange for him shaving his head and beard.

His hair and beard eventually grew back, and he was able to lead the Sharks to their first Stanley Cup Finals since 1991 in 2016 with a full playoff beard. Unfortunately, the Sharks didn’t win in the Finals, but there still might be more chances to see Burns and his playoff beard in future seasons.

Mike Commodore bounced around between various clubs and 11 NHL teams before retiring from playing hockey in 2014. Although he played for many teams, his most successful experience was his 2005-2006 season with the Carolina Hurricanes.

In this year, the Carolina Hurricanes went to the Stanley Cup Finals against the Edmonton Oilers. By this point, Commodore’s red beard was growing strong. His beard must’ve been a good luck charm because the Hurricanes went on to win their first Stanley Cup in the 7th game.

Paul Mara’s impressive playoff beard has graced TV screens many times throughout his hockey career. He played for six different teams in his 12 seasons with the NHL and made the playoffs five times. He played as a defenseman during his time in the NHL.

Mara started with the Tampa Bay Lightning for three years before being traded to the Phoenix Coyotes. He had his first playoff appearance with the Coyotes in 2002. He later played for the New York Rangers for three consecutive seasons and made the playoffs each time with them. These were from 2007 to 2009. Mara’s final playoff experience was in 2011 with the Montreal Canadiens.

Despite making the playoffs five times, Mara was never able to win the Stanley Cup before retiring from playing hockey in 2013. Although he never won a Stanley Cup Trophy, he is continually recognized for his memorable playoff beards.

Hartnell is another player whose hairstyle was famous in the NHL and perfect for complementing a playoff beard. Luckily, Hartnell got to showcase his playoff beard pretty frequently. The hairy forward played in 99 playoff games throughout his 17 seasons with the NHL.

Unfortunately, he was never able to win a Stanley Cup Final despite coming close with the Flyers in 2010. He followed the loss by having a great personal 2010-2011 season and was invited to play in the All-Star Game.

Hartnell has a very strange skating style that makes it more likely for him to fall. As he became a more seasoned player, it became popular for fans to tweet #HartnellDown when he fell. Hartnell embraced this hashtag and started the #HartnellDown Foundation, which raises money for hockey charities that use the sport to help kids. He even donated $1,000 for every #HartnellDown Twitter mention during the All-Star Game.

The playoff beard tradition has been going on for many years and has become a fan favorite tradition. Fans look forward to playoffs every year for the intense matches as well as all the strange beards that are grown. There are even Snapchat filters of the playoff beard. The players participate as a fun way to bond with teammates, respect the tradition, and hopefully bring good luck from the beard.

Can you trim a playoff beard?

This is a very controversial question amongst players and fans of the NHL. The tradition first began because players thought shaving would give them bad luck, so it seems like it would be against the tradition itself to trim it. However, some players do advocate for trimming their beard and maintaining it throughout the playoff season. Once a player’s team is knocked out of the playoffs, though, they are free to shave their beard.

How long do playoffs last in the NHL?

Hockey playoffs last longer than other sports. The amount of days ranges from year to year, but it’s usually about 60 days or less for most seasons. During this time there are a lot of games played. It generally ranges from about 85 to 90 games during playoffs. Since all four rounds are played based on a seven game series, the maximum number of games is 105, and the minimum is 60 games.

When did the playoff beard tradition begin?

The playoff beard tradition began with the New York Islanders in the 80’s. Back then, most of the players had facial hair all the time. However, when they went on a winning streak, the superstitious players didn’t want to change anything. So they would let their beards grow in order to avoid shaving and messing up their good luck. This good luck charm must’ve worked because they won four Stanley Cup championships in a row. Eventually, other teams caught on and grew playoff beards themselves.