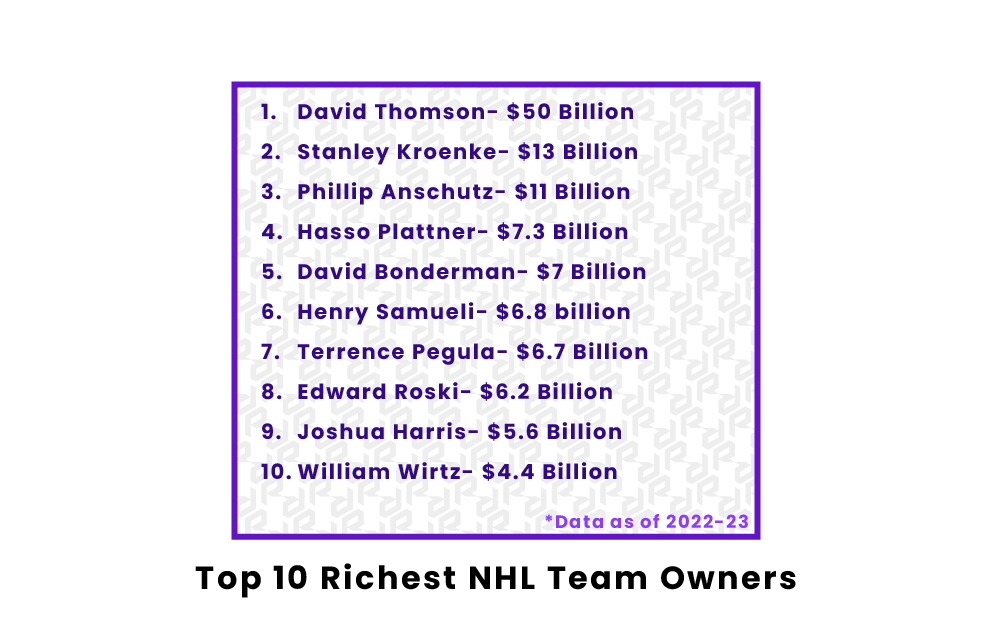 Sports team owners are some of the wealthiest people on the planet. Many have other occupations that allow them to gain wealth large enough to purchase a team. While the National Hockey League (NHL) is one of the less valuable sports leagues in America, that doesn’t mean it doesn’t have some of the richest owners. Below are the top ten richest NHL team owners.

Who are the richest NHL Owners currently?

David Thomson is a co-owner of the Winnipeg Jets and has an estimated net worth of over $50 billion. He helped buy the team while they were the Atlanta Thrashers and moved them to Winnipeg. He earned his wealth by inheriting his grandfather's business. His grandfather struck gold off of radio stations and newspapers in the 1930s. In 2006, Thomson purchased an international news agency called Reuters. This helped the business skyrocket and got him where he is today. Thomson is Canada's richest man and is notorious for being secretive and private. He has never made a press or television appearance and mostly keeps to himself and the business.

Stanley Kroenke is the owner of the Colorado Avalanche and has an estimated net worth of around $13 billion. He also owns the Los Angeles Rams, Colorado Rapids, Denver Nuggets, Arsenal F.C., Los Angeles Gladiators, Colorado Mammoth, and the Los Angeles Guerillas. He shares many of these with his wife, Ann Walton Kroenke. Ann is the daughter of Rob Walton, Co-founder of Walmart. He made much of his money from real estate after founding the Kroenke Group in 1983. Kroenke Group built many of the shopping centers. In 1999, he founded Kroenke Sports and Entertainment which is the company that owns all of the sports franchises. He owns the main local sports streaming options in Colorado and the main ticket purchasing service. In 2022, He completed a rare accomplishment where three of his teams won the championships in their respective leagues (Rams, Avalanche, Gladiators).

Phillip Anshutz is a co-owner of the Los Angeles Kings and has an estimated net worth of $11 billion. He made his fortune in various industries, including oil, railroads, telecom, real estate, and entertainment. He began his career by selling his father’s oil company in 1961 and using that money to invest in stocks and railroads. He is also a co-founder of Major League Soccer (MLS) in the United States. He owns the Los Angeles Galaxy, Chicago Fire, Colorado Rapids, Houston Dynamo, San Jose Earthquakes, and the New York/New Jersey MetroStars. He started Anschutz Entertainment Group, which operates over 350 affiliated arenas and concert venues worldwide.

Hasso Plattner owns the San Jose Sharks and has an estimated net worth of about $7.3 billion. He is the co-founder of the software company SAP SE. Plattner invested in San Jose Sports & Entertainment Enterprises, which led him to become the majority owner of the San Jose Sharks. He is rarely seen at the arena but is respected for having a passion for the team and trying his best to bring a winning culture to San Jose. Plattner is a very well-respected billionaire because of the charity work he does. He has donated €6 million to help fight the AIDS/HIV Crisis in South Africa. He also set up the Hasso Plattner Foundation and does a ton of charitable work worldwide.

David Bonderman is a co-owner of the Seattle Kraken, and his net worth is estimated to be just over $7 billion. In 2018, he filed to add an expansion team in Seattle, Washington, and the NHL granted his wish. He is the co-founder and chairman of TPG, a private equity firm that manages over $120 million in assets. Most of Bonderman’s money is self-made. He is also a minority owner of the Boston Celtics.

Henry Samueli is the owner of the Anaheim Ducks, whose net worth is estimated to be around $6.8 billion. Despite his large wealth, he is known for being very cheap. He was suspended by the league in 2008 after pleading guilty to lying to United States securities regulators, but the charges were later dropped. He is the co-founder of a chip maker called Broadcom. Broadcom was sold in 2016 for $37 billion. He bought the team in 2005 for $70 million, and it is now worth over $360 Million. The Ducks won the Stanley Cup in 2007 and were the first California team to ever win it.

Terrence Pegula is the owner of the Buffalo Sabres, whose net worth is estimated to be around $6.7 billion. He is known as one of the better owners in the NHL and is willing to spend as much money as needed to win a championship. He earned his wealth through oil and gas. He owned an oil company that he sold for $4.7 billion in 2010. He also owns the Buffalo Bills, Buffalo Bandits, and Rochester Americans.

Edward Roski is a part owner of the Los Angeles Kings, whose net worth is projected to be around $6.2 billion. Roski made the majority of his money from real estate. He created a company called Majestic Reality that got him where he is today. He is also a co-owner of the Los Angeles Lakers. He helped build the Staples Center (now known as Crypto.com Arena), which is where the Kings and Lakers play. Roski doesn't do a ton for the Kings, but his wealth helps as much as possible.

Joshua Harris is the owner of the New Jersey Devils, whose net worth is estimated to be around $5.6 billion. He bought the team in 2013, and they have not seen much success under his ownership. Harris is one of the co-founders of an alternative investment firm called Apollo Global Management, but stepped down from his role on the board in 2021. Along with the Devils, he has stakes in the Pittsburgh Steelers, Crystal Palace, and the Philadelphia 76ers. He is also the managing partner of the 76ers, which has contributed to a majority of his wealth. Despite not being known as the best owner, Harris is a very smart businessman whose wealth will continue to grow.

William “Rocky” Wirtz is the owner of the Chicago Blackhawks, whose net worth is estimated to be around $4.4 billion. The team has been extremely successful under Wirtz’s ownership, and he has created a great winning culture. He gained most of his money from inheriting his family's wealth. His dad was a very successful businessman and owned the team until he died in 2007. His son Rocky took over the team and the company, Wirtz Corporation. Wirtz Corporation manages lots of real estate in Chicago. He is also in the wine business and even won the 2014 Wine and Spirits of America Lifetime Achievement Award.

Who is the richest NHL Team owner?

The richest NHL Team owner is David Thomson. He is the owner of the Winnipeg Jets. His net worth is estimated to be well over $50 billion. He is known as the richest man in all of Canada. He inherited all of his money from his grandfather, who was very successful in the 1930s in the entertainment industry.

Who is the youngest NHL Team owner?

Tom Dundon is the youngest NHL team owner, born on September 5, 1971. He is the owner of the Carolina Hurricanes. He purchased the team in 2017 when he was 46 years old. He has an estimated net worth of around $1.5 billion.