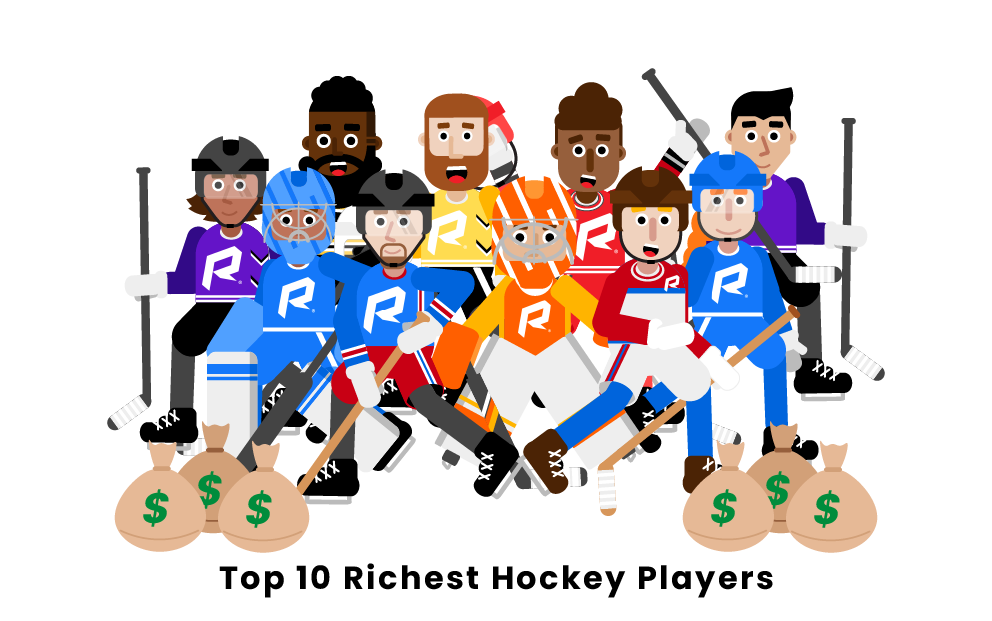 Who are the richest hockey players in the world?

Wayne Gretzky is a retired Canadian NHL hockey player who is known to be one of the greatest hockey players in the world. In Gretzky's career, he played for the Los Angeles Kings, St. Louis Blues, Edmonton Oilers, and New York Rangers. When Gretzky finished his NHL career in 1999, he was holding on to 61 NHL records.

Wayne Gretzky is the richest hockey player of all time, currently having a net worth of $250 million. Throughout his time in the NHL, Gretzky earned over $46 million from playing, as well as an extra $50 million for his sponsorships. After his time in the NHL, Gretzky invested smart through owning sports teams, real estate, and even a wine vineyard.

Mario Lemieux is a Canadian professional hockey player who spent all 17 of his NHL seasons with the Pittsburgh Penguins. Lemieux was drafted to the Quebec Major Junior Hockey League at the age of 15, and eventually broke the league record for points after scoring 133 goals and 149 assists in 70 games.

Mario Lemieux currently has a net worth of around $150 million. Through his time playing on the Pittsburgh Penguins, Lemieux made over $52 million. After the Penguins went bankrupt in 1999, he decided to purchase the Pittsburgh team and their minor league affiliates. In 2020, he is still the current owner of the team he grew up on.

Pavel Bure is a former professional hockey player from Russia who spent 12 years playing in the NHL. After 3 seasons with the Central Red Army team, Bure was drafted to the Vancouver Canucks in 1989. In his 1991-1992 season, he won the Calder Memorial Trophy for his rookie talent. In 2012, Bure was elected to the Hockey Hall of Fame for his incredible skills, after scoring a total of 437 goals in his career 702 NHL games. He is third all-time for goals per game.

Pavel Bure is the third richest hockey player of all time, currently having a net worth of around $68 million. Bure also went to court a few times against the Canucks organization for the way he was treated, where he actually came home with large settlements afterwards.

Known to be one of the greatest defenders in history, Chris Pronger is the fourth richest hockey player of all time. After getting drafted by the Hartford Whalers in 1993, Pronger played 23 seasons in the NHL hopping around on different teams, such as the St. Louis Blues, Edmonton Oilers, Anaheim Ducks, Philadelphia Flyers, and Arizona Coyotes. In his time with the Blues, he won both the James Norris Memorial Trophy and the Hart Trophy.

Pronger's current net worth stands at $65 million, both from his outstanding hockey career and post-NHL life. Since 2017, he has been the senior advisor of hockey operations for the Florida Panthers.

Alexander Ovechkin is a professional hockey player from Moscow, Russia who has played for the Washington Capitals since 2005. After 3 years, Ovechkin signed a 13-year, $124 million contract to extend his time with the Capitals. In 2018, he helped Washington win the Stanley Cup Finals for the first time in their franchise history. Ovechkin is a star athlete in the United States who is adored by fans. In particular, he is known for his wild celebrations after scoring.

Alexander Ovechkin currently has a net worth of $60 million, yet still has plenty of time to increase that in the coming years. He is only 34 years old and doesn't seem to be slowing down anytime soon.

Jarome Iginla is a professional hockey player from Canada who spent 20 years in the NHL. Although he spent 16 years on the Calgary Flames, he was still able to get a season on the Pittsburgh Penguins, Boston Bruins, Colorado Avalanche, and Los Angeles Kings.

Iginla's current net worth stands at $60 million, from both his contracts and endorsements. Throughout his career, he was endorsed by both Scotibank and Samsung Canada. He was also the cover of the EA Sports NHL 2003, which has helped contribute to his sum of wealth. He currently is a part-owner of the Kamloops Blazers, a team in the Western Hockey League.

Joe Thornton is a professional hockey player from Canada who was drafted by the Boston Bruins in 1997. Thornton played for the Boston Bruins until 2004, but then started playing hockey for the San Jose Sharks in 2005. Since then, Thornton has won several awards, including the Hart Memorial Trophy, Art Ross Trophy, and was named to the NHL First All-Star Team. He also has been very important in the NHL All-Star games, playing in it six different years from 2002 to 2009.

Joe Thornton is currently worth around $60 million, which comes from both his success in the NHL and his all-star appearances. After the 2019-2020 season, he will become a free agent, which may bring in more capital.

Joe Sakic is a former professional hockey player from Canada who spent all 20 years of his career with one franchise. In 1987, he was picked as #15 in the NHL Draft by the Quebec Nordiques. Eight years later, the Nordiques were renamed to the Colorado Avalanche. Sakic has many reputable accomplishments, including helping the Avalanche win the Stanley Cup in 1996 and 2001. He also played in a total of 13 All-Star Games and won MVP of the NHL in 2001.

After 20 professional seasons, Joe Sakic is currently estimated to be worth around $60 million dollars. His accolades earned him a spot as one of the top ten richest hockey players in the world.

Nicklas Lidstrom is a Sweden native who was drafted to the Detroit Red Wings in 1989. Since then, Lidstrom has been loyal to the Red Wings, helping them win the Stanley Cup four times in his 20-year career. He has many incredible accomplishments, including winning the Norris Trophy, the 2002 Conne Smythe Trophy, and being an NHL All Star 12 different times. In 2006, he was selected to be captain of the Red Wings, eventually winning the Stanley Cup 2 years later and becoming the first European captain ever to lead a team to victory.

Nicklas Lidstrom is retired, yet still is worth an estimated $60 million. Throughout his career, Lidstrom made over $100 million dollars, which is why he is ranked at the ninth richest hockey player of all time.

Sidney Crosby was the first overall pick for the Pittsburgh Penguins in the 2005 NHL Draft. Since then, the now 32 year-old Crosby has led the Penguins to win 3 Stanley Cup titles. He also has won the Hart Trophy twice already in his career.

As a young player with plenty of time left in the NHL, Crosby is still worth an estimated $55 million. In June 2012, Crosby signed a 12-year deal with the Penguins for $104.4 million dollars. For the past 10 years, Crosby has also had an endorsement deal signed with Adidas. Crosby also is sponsored by Tim Hortons, Gatorade, CCM, and more.

How much money do players make from winning the Stanley Cup?

Who has the biggest endorsements in the NHL?

Sidney Crosby is currently paid the highest in endorsements in the NHL. His yearly payout totals $4.5 million, from a variety of different companies. Reebok is his biggest endorser and in fact it is the largest endorsement deal in the history of hockey. He is also sponsored by Gatorade, Bell, Sport Chek, Frameworth, and Tim Horton's. The second highest paid in endorsements is Alex Ovechkin of the Washington Capitals, who has deals with Nike, Bauer, Gatorade, and Kraft.

What is an entry-level contract?

How do the Stanley Cup earnings compare to other sports championships?

Compared to other sports, hockey is the professional sport with the smallest payout for the champions. In the most recent Baseball World Series, each player on the Washington Nationals received almost $340,000. After the most recent Super Bowl, the Kansas City Chiefs each individually went home with $211,000. When the Toronto Raptors won the NBA Finals, every player went home with $366,666 each. The total pool money for the team was $5.1 million, which is still higher than the Stanley Cup winning pool ($4.9 million).