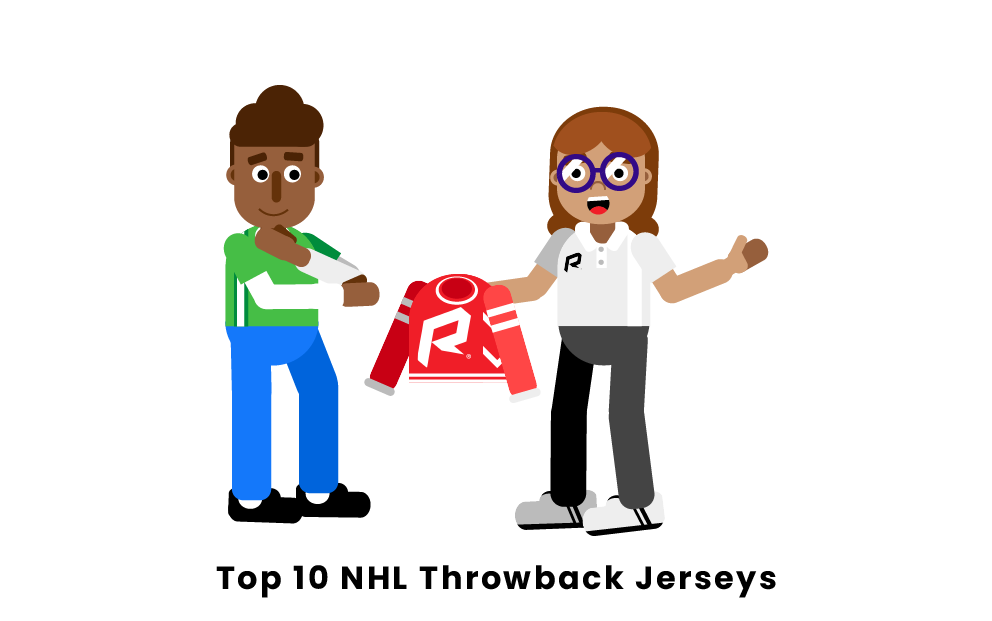 What are the most popular NHL throwback jerseys?

In 2018, Arizona Coyotes officially announced this black jersey as their third jersey, to be worn in 14 games throughout the season. The jersey was immensely popular with fans, players, journalists, and the entire hockey world. In fact, BarDown ranked this jersey the number one jersey of the entire 2010s. Though the jersey is still worn today, the original comes from the 1990s. The retro pattern pays homage to the desert and Mexican-American architecture of Arizona. This perfectly coincided with the style of the 1990s, with color and design being at the forefront of clothing. The maroon red and green pair very well with the black background of the jersey, making it a perfect color combination. The good news is that with it being the alternate jersey, you can find this Arizona Coyotes throwback pretty easily.

The New York Islanders have not worn their fisherman uniform since 1997. At that time, this jersey was actually a gigantic failure. In an effort to market a young and terrible team without spending the money for good players or to revamp a broken-down stadium, the Islanders made this new logo. It was immediately extremely unpopular, as was the fisherman mascot that came with it. Now, as the Islanders have been able to win games and reside at the fancy and very expensive UBS Arena, people have begun to appreciate this throwback for what it is: a super cool jersey. The navy blue, combined with teal and oranges, as well as the block lettering, make for a jersey that is easy on the eyes. With the rise in throwback jerseys being used as alternates, we can only hope to see the Islanders playing in these soon.

Many Washington Capitals fans over the age of 20 will remember these “screaming eagle” jerseys as the main uniform of their team. In fact, many older fans associate this jersey with their best memory. This was the uniform their team was wearing when they clinched a spot in the Stanley Cup Finals for the first time. It was their only Stanley Cup appearance until 2018, when the team finally won it all. Partially due to the nostalgia of this uniform, people are crying out for it to be brought back. Though the team has since changed its logo and colors, this uniform has some components that Capital fans love. The stars are still intact and the Eagle logo, though simple, is one of the favorites of fans across the hockey world. Other hockey fans have redesigned this jersey and tried to modernize it, incorporating the modern colors of the team. Either way, now that the Capitals have won it all, doing what the 1997 team could not, people would love to see them throw it back to this jersey.

You’ve probably heard of the Anaheim Mighty Ducks, even if you didn’t know they were a real NHL hockey team. Based on the 1992 Disney movie “The Mighty Ducks,” this team came out of the gate strong with their uniforms. Their first jerseys were their most popular, featuring a white and purple-based jersey with a duck-billed mask and crossing sticks logo. Things went downhill from there, both for the team and for the uniforms. Today, the Anaheim Ducks, as they are called, feature orange, white, and black as their colors and have a simple ‘D’ as their logo. However, much like the Arizona Coyotes, they knew that a throwback never goes out of style. This black jersey is the Ducks alternate and pays homage to the Mighty Ducks. Though they use black, which came to be in 2003, the jersey still looks almost identical in design to the original Mighty Ducks jerseys.

Not only does this throwback transcend time, but also a country’s borders. This jersey was originally worn by the Atlanta Flames in 1972 when the team joined the NHL. The team lasted until 1980, but it lost a ton of money. That year, the team made a move to Calgary in Canada. Luckily, the team kept one part of their disastrous time in Atlanta. The color and the general logo of the Calgary Flames are fairly similar to that of Atlanta. The red and yellow give a fire-like look. The team replaced the giant letter ‘A’ with a ‘C,’ and the flames came out of the side, not the bottom. The Calgary jerseys are very popular among fans and are widely considered some of the best jerseys of their decade. The Atlanta Flames no longer exist, but there is one thing people want to see back, these awesome jerseys.

This jersey was so impactful that Bleacher Report named it the 18th best throwback jersey of all time, regardless of sport. For a sport like hockey that doesn’t utilize throwbacks as much as other leagues like the NBA, that is a big deal. Quebec wasn’t the first location for the Nordiques; originally, the team played in the Bay Area. In 1973, the team moved to Quebec, where they had a roller coaster experience. In 1996, due to a lack of funding, the team moved to Denver and became the Colorado Avalanche. The one constant throughout the turbulent time in Canada was the amazing jerseys. The solid coloring is easy on the eyes, and the logo stands out very clearly. The Avalanche are no slackers in the jersey department either; their black, blue, and red jerseys came in at number four of the best of the decade. However, as the NHL has expanded back to Winnipeg and to Las Vegas, there is a strong push to bring back these amazing Nordiques jerseys and maybe even bring a team back to Quebec.

This is a rare instance where people want to bring back a throwback that was already brought back. This old-school Buffalo Sabres jersey was already a throwback when it was used as an alternate jersey from 2010-2012. This jersey keeps the original colors and logo from when the team was inaugurated in 1970. This jersey made it onto the Bleacher Report top 25, at the 12 spot, the highest of any NHL jersey. The Sabres still have very cool jerseys; their white ones made it to the number seven spot of the best of the decade. Nothing seems to beat this classic, though, with the old-fashioned script and the small Sabre logo below the lettering. This gives a feel of old-time hockey while still being slick and really cool. If the Sabres could bring it back ten years ago, there is no reason they can’t do it again.

The LA Kings are in a rare position. When it comes to throwback jerseys, they have not one, not two, but three to choose from. Though, to be fair, one of the three is largely disliked with its cartoonish king design. The other two, one being a gold and purple jersey with a big crown in the middle, dates back to the 1980s and the origins of the LA Kings. The more simple white, black, and silver colorway, the same colors as today, is a throwback to the 1990s and the infamous acquisition of Wayne Gretzky. The LA Kings Throwbacks might not be the coolest looking or even the most creative jerseys. The colors aren’t all that different, and the design isn’t all that crazy. What the jerseys do have going for them is a classic look and a feeling of nostalgia. Kings fans remember when the team was at the top of the NHL. As the Kings have regained some of that in recent years, the team has brought their 1990s jerseys back.

The Hartford Whalers were doomed to fail. Not only did they play in the relatively small city of Hartford, Connecticut, but their stadium was located in a mall. The team eventually was moved and became the Carolina Hurricanes. However, there is one thing from the Whalers that people still love, their jerseys. The green and blue combination, along with the ‘W’ turning into a whale’s tail that makes a hidden ‘H’ might be one of the most ingenious designs in hockey history. The Hurricanes knew this, which is why they brought back the Hartford Whalers jersey in 2018. It was an instant hit. Hockey fans love these throwback jerseys, as do players and pretty much everyone in the hockey community. What makes these jerseys special is their simplicity. They picked a logo and colors that worked and stuck to them. Sure, they couldn’t save NHL hockey in Connecticut, but they certainly look good.

The St. Louis Blues throwback red, yellow, and blue jerseys are some of the most popular jerseys in NHL history. These, much like others on this list, were first worn in the 1990s. But the 2019 NHL champions knew that these jerseys were super cool. They wore them throughout the late 2010s as a throwback jersey and as an alternate option. The red adds a non-traditional third color to the blue and yellow that already works. The logo is the same as today, and the jerseys aren't too outlandish. As far as throwbacks go, many fans love these St Louis Blues uniforms.

What do you call a hockey jersey?

When you talk about hockey jerseys, some people might get mad at you for even calling it a jersey. Hockey jerseys are often called sweaters. This is a call back to the time when hockey was played outdoors, and the jerseys that players wore were thick woolen sweaters used to keep warm. Today, hockey uniforms are made of thin polyester, and to some people that is enough to call them jerseys. However, hockey purists and people who like to show off their hockey lingo might still call them sweaters. Either way, you are talking about the same thing.

Where can I buy throwback hockey jerseys?

Sometimes throwback hockey jerseys are really hard to find. Some jerseys are still worn today as alternates. These you can most likely find on the team website, on NHL.com, or on Fanatics sites. These jerseys are official and are sold just the same as any jersey. You can buy it with a player’s name, you can buy it blank, or you can customize it to have your name and whatever number you choose. Some throwbacks might be harder to find, but reseller sites like eBay and Mercari often carry them. You may have to pay a little bit more for these.

How much does a throwback hockey jersey cost?

Throwback hockey jerseys vary greatly in price depending on which kind you want. If you are looking for a regular jersey that is currently worn by a team as an alternate or as a throwback jersey, you may be able to find it for as cheap as $100 on a team website. These can cost up to $150 or $200. If you want a more rare jersey, it will cost you more, especially if it is vintage, from the time when it was worn. Rare jerseys will be a few hundred dollars, even a thousand, depending on their rarity.

How many jerseys do NHL teams have?

Every NHL team has a home and an away jersey. These are usually in the two main colors of the team, blue and red, black and white, something like that. For some teams, that is all they have. Many other teams have an alternate jersey. For some teams, this is a throwback jersey. For others, it is a third color from their uniforms. Then even fewer teams have a fourth jersey they may wear a handful of times during a season. This can be a throwback, or it can be a jersey for special occasions like a green jersey for St. Patrick’s day, a gold jersey for a big anniversary, or something like that.