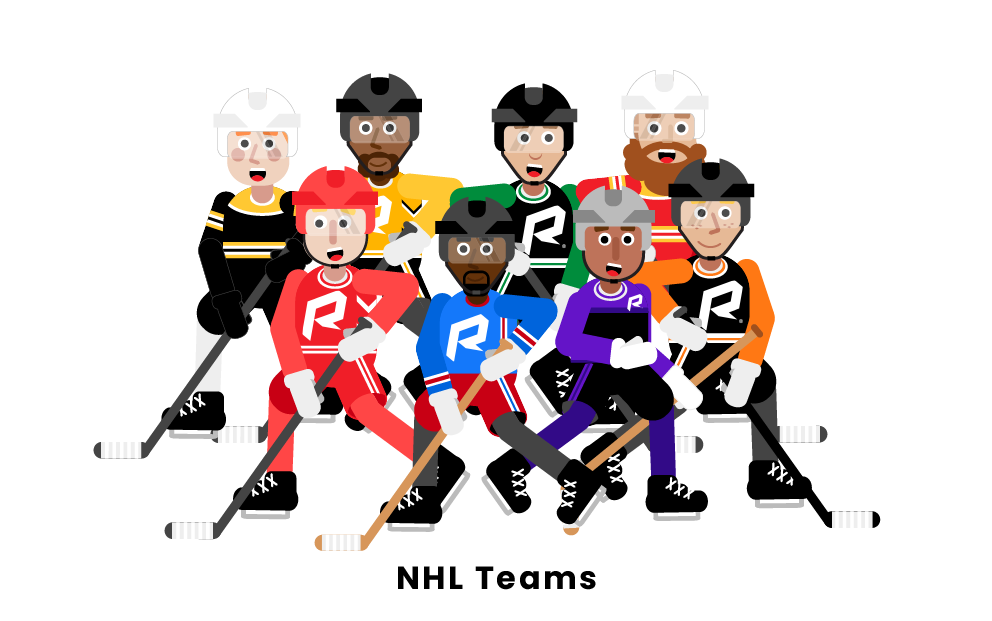 What are the best hockey teams of all time?

The Montreal Canadiens hold many of the most important records in the NHL. The Canadiens were actually one of the first NHL teams when the league was founded in 1909. In the 100+ years since then, the team has found more success on the ice than any other. For one, they hold the record in most Stanley Cup wins with a whopping 23. That’s nearly double the amount of the next closest team. They also hold the stunning record of five championship wins in a row between the years 1955 and 1960. The Canadiens won their first championship in the 1915-16 season and ever since then have found continued success in the NHL.

Founded in 1917, The Toronto Maple Leafs are runner-up to the Canadiens in Stanley Cup wins with 13. Two of those wins came in the first five Stanley Cup tournaments, where they had wins in the 1917-18 and 1921-22 seasons. Much of the Maple Leafs’ success came early in their history, as they won all 13 of their Stanley Cups before 1967 when they won their last title. The Maple Leafs are reported to be the most valuable team in the NHL as they’re worth about $1.3 billion. Their main rival is the Canadiens, and the two often sell out the games in their respective cities when they play each other.

The Detroit Red Wings, founded in 1926, are a hockey team with a rich history and lots of success. In total, they have won the Stanley Cup 11 times, which puts them in third place in all-time wins. They are second place in finals appearances, however, with 24. Only the Montreal Canadiens have more. One of their best eras of play was in the 1990s when they won the Stanley Cup in 1995, 1997, and 1998. One of the main reasons for this was the emergence of the “Russian Five,” a group of Russian players who proved to be some of the most dominant players in the league.

Despite being one of the younger teams in the league, the Oilers have established a legacy of continued success on the ice. The Oilers joined the NHL in 1979 and quickly found success with their star player Wayne Gretzky. Gretzky is widely considered one of the best hockey players of all time, and he spent nearly the first decade of his career with the Oilers. In their history, the Oilers have won the Stanley Cup five times and won back-to-back cups between 1983-1985 and again in 1986-1988. They’ve also won the Presidents’ Trophy twice, which is given to the team with the most points in the NHL. The league has been giving the award out since 1986.

The Boston Bruins were the first American team to make their way into the NHL. They joined in 1924 and got off to a good start by winning the 1929 Stanley Cup. In total, the Bruins have won six Stanley Cups, which ties them for fourth-most out of all the teams in the NHL. They have appeared in the Stanley Cup final 20 times which also puts them at fourth-most. Additionally, they have also fielded some of the teams with the best ever winning percentages in a season, including their 1970-71 team, which won almost 75% of their games.

The Chicago Blackhawks came onto the NHL scene in 1926 and were one of the first American teams in the NHL. Their first Stanley Cup win came in 1934 in a nail-biting series that ultimately ended up in double overtime in the final game. Their most unlikely championship, however, came in 1938. They barely managed to get into the playoffs with a very poor record of 14-38. Once they were in the tournament, though, they managed to upset the other teams and pull off the unlikely Stanley Cup win. They then went on to win three Stanley Cups between 2010 and 2015, establishing themselves as a true dynasty. In their long history, the Blackhawks have managed six Stanley Cup wins.

The Pittsburgh Penguins have a respectable five Stanley Cup wins since they were founded in 1967. What’s even more impressive is how the Penguins have only lost once out of the six times they’ve made it to the Stanley Cup final. They were also back-to-back champs in both 1991 & 1992, along with the 2016 & 2017 seasons. Their two most famous players both happen to be two of the greatest hockey players of all time: Mario Lemieux and Sidney Crosby. Both have created legacies of some of the best to ever take the ice in the NHL, and they did it with the Penguins.

The New York Rangers first came to the NHL in 1926 and immediately found success. In only their second season (1927-1928), they managed to win the Stanley Cup. It was a very early win for the team, and they followed it up with another win a few years later in the 1932 season. All told, they’ve won a total of four Stanley Cups in their nearly one hundred years of play. In addition to their four wins, they have seven other appearances where they didn’t come away victorious. But they haven’t just found success in the postseason either. The Rangers have won the President’s Trophy three times for being the best team in the regular season.

Founded in 1972, it took the New York Islanders a couple of years to find their footing in the NHL. They first made the playoffs in 1974 and continued to build on their success in the following years. In the 1980s, however, the Islanders’ success reached new heights. Between 1979 and 1983, the team won the Stanley Cup four years in a row. They managed to make the final again in the 1983-84 season, but they were defeated by the Edmonton Oilers. In total, the Islanders have won six division championships and have led the league in points three times. Their legacy is firmly rooted largely because of their dazzling success in the early 80s.

The history of the New Jersey Devils actually began in Kansas City, where they were called the Scouts. After a brief move to Colorado, the team finally moved to New Jersey and became the Devils. It took some time to find their footing, but they finally found success in the 90s, with their first Stanley Cup coming in the 1994-95 season. They won again in 1999 and 2002. They also won a total of nine division champions, and much of this success came from drafting Martin Brodeur, who many regard as the best goaltender of all time.

Having only been around in the NHL since 1992, the Tampa Bay Lightning have already found quite a bit of success. In total, they have three Stanley Cup wins, the first of which came in 2004. They had to wait over a decade for their next win, which was in 2020, but they followed it up with another win in the following 2021 season. They had an additional finals appearance in the 2014-15 season, but they lost to the Chicago Blackhawks. Perhaps the Lightning’s greatest achievement, however, was their 2018-2019 regular season, where they tied the Red Wings’ record for most wins in a single season with 62.

After relocating from Quebec in 1995, the newly renamed Colorado Avalanche got off to a quick start by winning the Stanley Cup in the 1995-96 season. It was one of their two championship wins, the other of which came in 2001. The Avalanche are unique in that they have never lost in the Stanley Cup finals. Both times they reached the final, they won. The team is also famous for several winning seasons where they racked up high win totals. Three President’s Trophies have been awarded to the Avalanche, and they posted the twelfth-winningest regular season in NHL history in the 2021-2022 regular season with 56 wins.

Founded in 1974, it took almost a decade for the Capitals to find their way into the playoffs. They slowly built on their success which culminated in a 2018 Stanley Cup win. They have one other appearance in the Stanley Cup finals, in which they lost to the Detroit Red Wings. The Capitals have won their division a total of 13 times. They actually won their division five times in a row between the years 2015 and 2020. They’ve also posted a few seasons with very solid records, including both 2016 and 2017. They won the President’s Trophy in each of those respective seasons.

What were the first NHL hockey teams?

The National Hockey League as we know it today was founded in 1917 with only four teams. This included the Montreal Canadiens, the Montreal Wanderers, the Ottawa Senators, and the Toronto Arenas. It wasn’t until the 1920s that the NHL started adding American teams. This ultimately led to the era of the “Original Six” in the 1940s, which is when the NHL had six teams, and the league really started to take shape. These teams were the Montreal Canadiens, Toronto Maple Leafs, Detroit Red Wings, Boston Bruins, New York Islanders, and Chicago Blackhawks.

Which NHL team has won the most Stanley Cups?

What are the newest NHL teams?

The NHL has a history of expanding the league, and new teams are being added all the time. The most recent team was the Seattle Kraken, who were added to the league in 2021. They finished their inaugural season with a record of 27-49-4. Aside from the Kraken, the next-newest team is the Las Vegas Golden Knights, who had their first season in 2017-2018. In that first season, they actually went to the Stanley Cup finals, though they were beaten by the Washington Capitals.