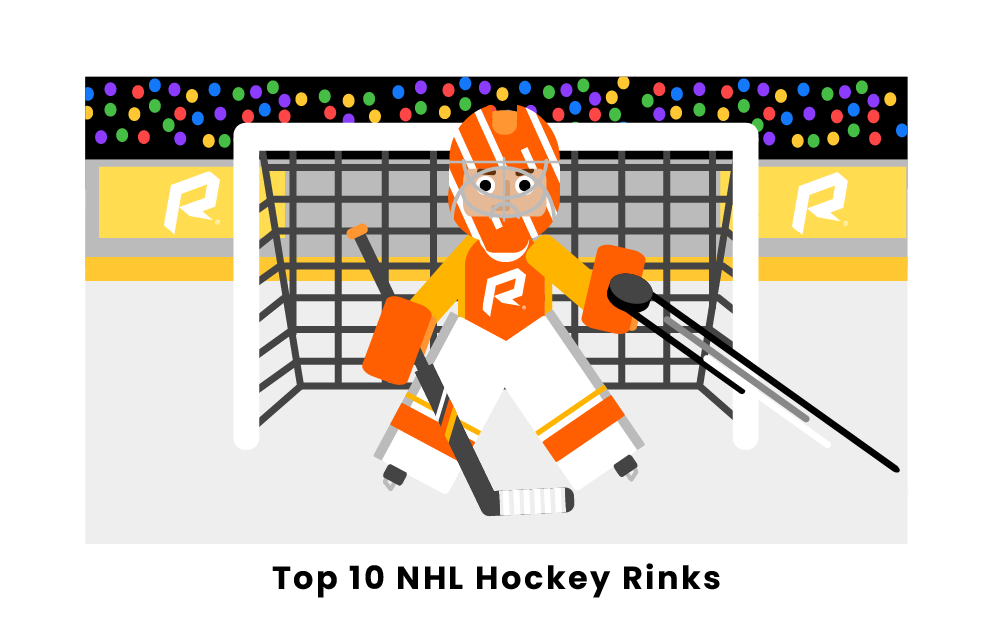 What are the most popular NHL hockey rinks?

The best NHL hockey rink in the entire league is the Bell Centre. This arena is located in downtown Montreal, Quebec and is home to the Montreal Canadiens. This building was opened in 1996 and can seat over 20,000 fans. The arena also has four decks of seating with a press box in between. All of the seats in this arena are steeply sloped allowing for an amazing view of the ice from any seat. This rink also has an impressive video board and vibrant laser light show capabilities.

In a poll conducted by the NHL for all of its players, the Bell Centre was voted the most enjoyable hockey rink to play in and the arena with the best ice. Although the concourse is typically very crowded, the atmosphere in the arena is unlike any other. Walking into it gives you a glimpse of history, with the team's 24 Stanley Cup banners and 11 retired jersey numbers hanging from the ceiling. This rink is a must see venue for hockey enthusiasts.

Xcel Energy Center is a great place to both watch and play hockey. This rink is located in Saint Paul, Minnesota and is the hub of the Minnesota Wild. This arena nicknamed "The X" was opened in late 2000 after several years of construction. The building is one of the most recent arenas built for NHL hockey and has an extremely modern look. The rink can hold approximately 18,000 of the league's friendliest fans.

This arena is known for its classic organ that is played during the team's games. There is also a three-piece band that interacts with, supports, and entertains the crowd. These features, along with all of the forest green seats, create a wholesome and comfortable ambiance for fans. The scoreboard and LED lighting in the rink also adds to the arena's overall look and feel.

Bell MTS (Manitoba Telecom Services) Place is one of the newest rinks that has been built for NHL hockey. This arena is located in downtown Winnipeg, Manitoba which is located more broadly in Canada. The hockey team that plays in this building is the Winnipeg Jets, who were once called the Atlanta Thrashers. This rink was built when the NHL team moved from Atlanta to Winnipeg and there was a need to replace the declining Winnipeg arena. It began to officially operate in 2004.

Although this arena is relatively small, it is considered to be one of the most energetic and thrilling stadiums to watch a game in. This stadium is always filled with devoted fans that appreciate the game. The environment is considered to be electric with the combination of bright lights, loud sound effects, and a completely full stadium.

The SAP Center is said to be one of the loudest and most comfortable buildings in the NHL.This arena has gone through many name changes since it was built in 1993, and the name "SAP Center" has been around since 2013. This rink, also known as "The Shark Tank," is located in San Jose, California. The NHL team that occupies this rink is the San Jose Sharks. This arena is considered to be extremely spacious and has great views from any seat in the house.

Although this team only began playing in 1993, the atmosphere makes it feel like they have been around for decades. This Northern Californian stadium is an outstanding place to watch a hockey game.

The Bridgestone Arena is an amazing place to enjoy your experience before, during, and after hockey games. The arena was built in 1996 and is located in downtown Nashville, Tennessee right on the city's broadway strip. Currently, the Nashville Predators are playing at this rink.

The layout of this building is quite unique with one side of the bowl consisting of traditional upper and lower levels, and the other side being fixed closer to the ice with less club levels. The arena is also beautiful on the outside because of its distinct shape.

From the moment fans walk into the lobby, they are mesmerized by the nice structure and high ceilings. The Predator's colors also line the seats to light up the entire rink once fans walk into the main section of the stadium. Fans that enjoy having a quality well-rounded game experience should visit this stadium.

The United Center has recently become a top destination for watching quality NHL hockey games. This rink was built in 1994 and can hold over 20,000 fans. It was built to replace the older Chicago Stadium and is now home of the Chicago Blackhawks NHL team.

One of the best aspects of this stadium is the history that comes with it. The Stanley Cup banners and several retired jerseys hanging from the rafters bring all of the stadium's occupants back in time.

The architecture in this building is gorgeous and spacious. The concourse is full of various concession stands that offer specifically Chicago-style foods. The rink becomes one of the loudest and brightest stadiums in the world as videos are played of Blackhawk history and when the National Anthem is sung. This is a top stadium to watch hockey games in as the atmosphere is unparalleled.

Madison Square Garden is considered to be one of the most famous stadiums in the entire country. Built in 1968, Madison Square Garden is one of the oldest and most historic buildings in the NHL. This rink is located in Midtown, Manhattan, New York and is currently home of the NHL's New York Rangers. The venue is easily accessible by subway but more difficult to get to by car.

The arena recently underwent a billion-dollar renovation to improve many aspects of attending a game in the stadium. This includes bettering the view of the ice for fans, making the stadium brighter, increasing the number of food options, and initiating better cleanup policies. The bottom of the arena is also covered with murals of all of the teams that have played in the facility, including the New York Rangers. There are several concourses so the stadium never feels overly crowded and is always a comfortable place to watch a game.

The Air Canada Centre, also known as ACC, is a beautiful building that is great for watching hockey games in. This building opened in 1999 and is home to the Toronto Maple Leafs located in Toronto, Ontario. Commonly referred to as "Leafs Nation," the rink is known for its important role in the hockey capital of the world. This arena has the capacity for over 18,000 fans and is easily accessible for all. The beautiful building is also one of the most expensive to see an NHL game in.

In addition to a typical stadium concourse, the building has an additional area called "The Galleria." This part of the building has interactive games, a team store, ticket offices, and historical murals throughout the walkway that display the franchise's past. The incredibly lively atmosphere helps to make this stadium a must see destination for loyal hockey fans.

Rogers Place is a very new arena for NHL hockey fans. This stadium is located in downtown Edmonton, Alberta which is more widely located in Canada. This arena opened in 2016 and is now the hub for the Edmonton Oilers. It was built to replace the Northlands Coliseum, which was previously home to major sports teams in this area. This construction of this building cost $600 million dollars.

Since this rink was so recently built, it is extremely clean and polished with a very attractive interior design. The seating is very comfortable with perfect views of the ice and there are many concession stands to choose from. The building is also very well lit with bright lights and laser shows that occur during the hockey games. This modern looking rink is a great new place to catch a hockey game.

The Nationwide Arena is a large multi-purpose arena that has exceeded all expectations for a state of the art NHL rink. This building is located in Columbus, Ohio and was completed in 2000. The original purpose of this arena being built was to handle the expansion of the Columbus Blue Jackets, which is the team that currently competes in this stadium.

This stadium has far more amenities than an average stadium. There are restaurants, plazas, various parking lots, and more. This rink is also extremely spacious, with comfortable seating and beautiful views of the ice. It is also so large that it has a practice rink inside of the actual building rather than separate from the stadium. Other great features of this arena include a bright scoreboard, club level seating, and VIP suites. Fans are impressed by this structure from the minute they walk through the gates.