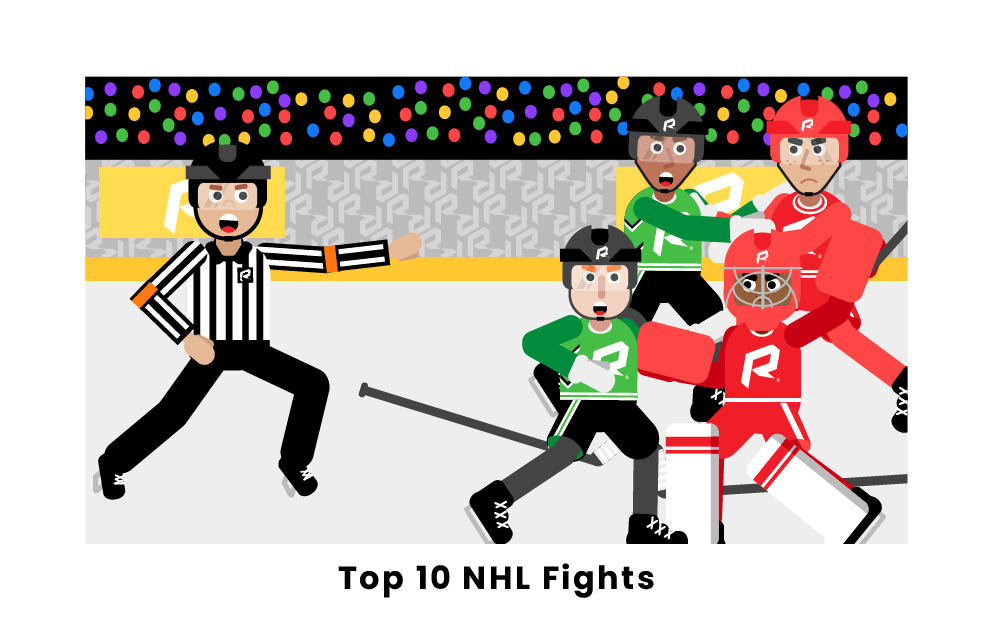 What are the most well-known NHL fights?

Without a doubt, some of the biggest fights are those that get the entire team involved. In the Ottawa Senators vs. Philadelphia Flyers game in 2004, both teams set the record for the most penalty points accumulated in a single game. The brawl started with a fight between Flyers player Donald Brashear and Ottawa’s Rob Way; however, this quickly escalated into the two teams fighting it out on the ice. Fights continued until the end of the game, with a grand total of 20 players being ejected from the match and only five players left on the team benches. While the Philadelphia Flyers won the game 5-3, fights continued after the game, with both coaches exchanging words before exiting the ice. In the end, the Philadelphia Flyers accumulated 213 penalty minutes while the Senators received 206, a record total for the NHL of 419 penalty minutes.

It is very rare in hockey for fans to get involved in player vs. player fights. However, in 1979 New York Rangers and their fans got involved in a brawl that extended long after the game. The fight began when the New York Rangers failed to score on a breakaway, losing to the Boston Bruins 4-3. At the end of the game, Al Secord of the Bruins decked Ulf Nilson of the Rangers. As other players became involved, a Rangers fan reached over the Bruins bench and hit a Bruins player with a game program, cutting him under the eye. Following, Bruins players jumped into the stands and began fighting a group of Rangers fans. The fight took multiple security guards to break up and is now the reason for higher glass around hockey ice in National Hockey League arenas.

The Quebec Nordiques vs. Montreal Canadiens brawl in 1984 is commonly known as the “Good Friday Massacre,” and for a good reason. The fight occurred during the 1984 Stanley Cup playoff match between the two Canadian teams on April 20, 1984. The two teams are known for having a rivalry, which was evident in the bench-clearing brawl towards the end of the second period. The fight resulted in 11 ejections from the game and 252 penalty minutes in total. One of the officials of the match was criticized for not taking control of the game and the players. He also failed to alert the teams of the assigned penalties, adding to the tension between the two teams. In the end, the Montreal Canadiens ended the series, winning 5-3 and advancing to the next round.

Bob Probert, without a doubt, is a known fighter in the National Hockey League. However, McSorely was not known to shy down from a fight, being the fourth most penalized player in National Hockey League history. One of the biggest fights came when Bob Probert of the Detroit Red Wings got into a fistfight with Penguins player Marty McSorely. Probert started the fight after shoving McSorely with both hands. Soon after, the two threw punches, tugging at jerseys, and didn’t tire out until the officials stopped the fight after over 100 seconds of fighting. While Bob Probert was known for his fights in the NHL, this fight is one for the history books for its length and legendary matchup.

David Koci vs. Zdeno Chara is a fight that must be recognized for its legendary matchup between two star players: Zdeno Chara of the Boston Bruins and David Koci of the Chicago Blackhawks. Zdeno Chara had leverage over David Koci as he had 1,385 penalty minutes in the 2007 season while Koci only had just 461. However, during this fight, both players were throwing hard punches at each other. Eventually, Chara would punch Koci square in the face, drawing blood and alerting the referees that it was time to jump in and end the fight. Zdeno Chara was visibly angry and needed to be held back by the referees as Koci made his way off the ice rink. While many say that Zdeno Chara won the fight, anyone can agree that both players put up a fight.

The fight between Jay Beagle of the Washington Capitals and Aaron Asham of the Pittsburgh Penguins was quicker than your average National Hockey League fight. After Jay Beagle knocked the helmet off Penguins player Kris Letang on a play, Aaron Asham started the fight with Beagle to rectify the wrong done to his teammate. However, the fight ended quickly after Asham threw a couple of blows to Beagle’s head. Beagle was left bleeding and unconscious on the ice as referees rushed to his aid. Immediately after the fight, Ahsam made some mocking gestures with his hands as he made his way to the penalty box. This angered many of the Washington Capital players and fans. Aaron Asham would go on to apologize immediately after the game for the gestures, realizing his unsportsmanlike conduct. Despite being knocked unconscious, Jay Beagle experienced no signs of a concussion and played in a team practice in the days following the match.

While fights in the National Hockey League are always exhilarating to watch as a fan, they are even more exciting during the playoffs and the Stanley Cup Final. In 1978, Boston Bruins player Stan Jonathan and Montreal Canadiens player Pierre Bouchard fought tirelessly in the fourth game of the 1978 Stanley Cup final. Pierre Bouchard had lots of leverage over the Canadiens player, being 6 feet 2 inches compared to Jonathan, who was only 5 feet 8 inches. The fight began when Bouchard shoved Jonathan as they were making their way to the puck, which quickly sprawled into an all-out brawl on the ice. However, this fight proved that size is not always everything. Jonathan was relentless, breaking Bouchard's nose and cheekbone during their iconic fight. It took two referees to get Jonathan off Bouchard, who was face down on the ice and bleeding from the nose. But, both players were still fired up after the fight and tried to exchange words with each other from across the rink.

One of the most well-known knockouts in hockey is between Aaron Downey of the Dallas Stars and Jesse Boulerice of the Carolina Hurricanes in a 2003 regular season game. Early in the first period, both players knew the fight was coming as they stood face to face with their hands square. Both players were clearly waiting on the other to throw the first punch. The first punch was eventually thrown by Boulerice, who missed Downey entirely. It didn’t take long for Downey to retaliate. He threw one hard punch to Boulerice’s face, quickly knocking him to the ice and ending the fight. While this fight ended quickly, the speed and strength of Aaron Downey are impressive. He added an extra level of toughness to the Dallas Stars, and it is clear why Aaron Downey is a known fighter who knocks opponents out quickly.

It is commonly known that the Vancouver Canucks player, Rick Rypien, is always willing to fight any opponent, no matter the size. The fight between Rick Rypien and Atlanta Thrashers player Boris Balavik exemplified just that in 2009. The fight started after an Atlanta Thrashers player tripped a Vancouver Canuck. While the two were not involved, it is clear that the fight stemmed from Rypien wanting to solve this wrongdoing between the two teams. Rick Rypien had a strong advantage during the start of the fight as he pressed Balavik up against the boards. Eventually, the fight made its way to the middle of the ice. Rypien, still having the advantage over Balavik, continued to throw punches until referees determined the fight was over when Balavik fell to the ice. It is clear that Rypien won the fight, and it is not surprising considering the enormous size difference between the two skaters.

Bob Probert of the Detroit Red Wings and Tie Domi of the New York Rangers had a long-standing rivalry. Both players were notorious for their fighting skills, and both were on a mission to prove who the better fighter was. While the two players fought a total of nine times in their whole career, the first fight between the two is one of the most brutal fights between the two star players. The fight lasted for over 45 seconds, with both players continuously throwing close punches at each other. Tie Domi of the New York Rangers put up a fight and practically removed the jersey of Probert. However, it did not stop Probert from retaliating with some forceful punches. In the end, Domi would win the fight as the referee would jump in to save a hurt Bob Probert. Tie Domi, visibly happy that he had won the fight, would go on to gesture to the crowd and celebrate his win.

Is fighting allowed in hockey?

In hockey, fights are allowed and sometimes even encouraged by players and coaches. A fight often starts after an altercation or bad interaction during gameplay on the ice. Once players take their gloves off, the game stops and the referees position themselves to stop the fight at any time. A fight stops when a player hits the ice or when the referees deem it best to stop fighting. After the fight, both players receive penalties and must spend a certain amount of time in the penalty box.

Why is fighting allowed in hockey?

Fighting is allowed in hockey because it is often thought to end disputes between players. The idea behind allowing players to fight is that it allows players to police themselves and end disputes before they result in more harmful actions. However, many players, coaches, and officials have spoken out against letting players fight, as it has been known to cause life-threatening injuries. Despite this, while fighting may have serious consequences, it still remains an integral part of the sport.

Who was the best hockey fighter of all time?

The best hockey fighter of all time is said to be Tiger Williams. Williams has the record for the most penalty minutes at 3,966 minutes. He was known to be the aggressor of many fights and, in a single season, earned 358 penalty minutes. Other talented hockey fighters include Bob Probert and Tie Domi, who were known in their respective seasons to rack up penalty minutes for fights they were involved in.

How many fights happened in the NHL in 2019?

In the 2019 National Hockey League season, there were a total of 224 fights. Statistics show that fighting has steadily declined in recent seasons, and the 2018-2019 season showed the least number of fights in a single season, with under 200 fights. These numbers are nothing compared to the number of fights seen 10 years ago in the sport.