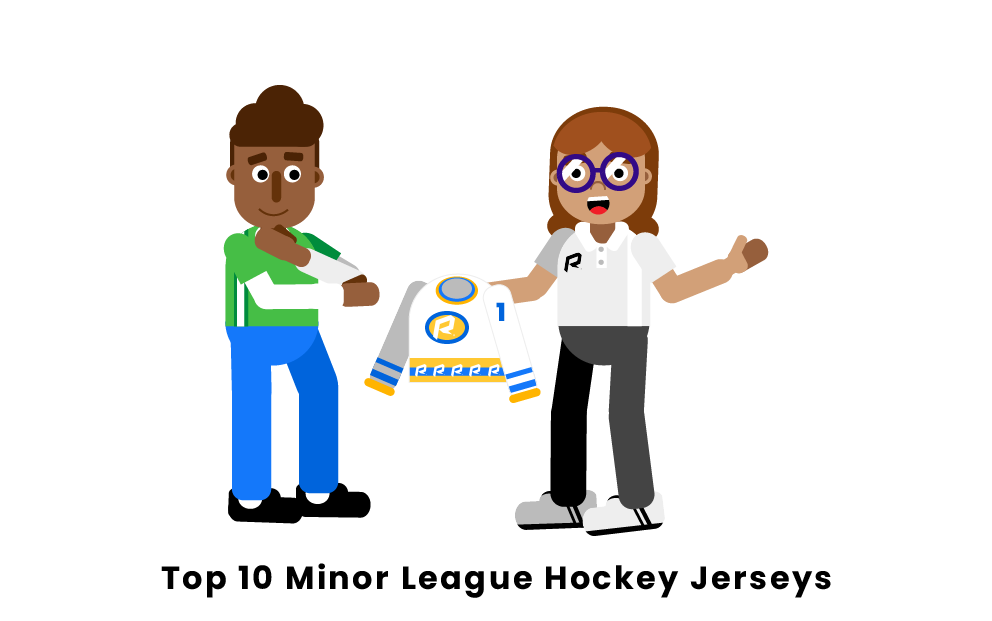 What are the most popular Minor League hockey jerseys?

The Laredo Bucks were a minor league team in the Central Hockey League located in Laredo, Texas. Their away jersey is extremely visually pleasing for many reasons. The antlers go around the whole waist of the jersey, which really emphasizes the mascot for the team, along with the appearance of antlers continuing underneath the sleeves as well. The dark tan and navy blue also complement each other very well. The stripes that go on the end of the sleeves also add some dimension to the arms and bring attention to the player when holding a hockey stick. The stripe of stars along the waist is also very complementary to the jersey as a whole because it coincides with the Bucks logo, where there is a star underneath the K. Overall, this jersey is very hard to beat because of how well everything on the jersey meshes together and encapsulates the spirit behind the Laredo Bucks hockey team.

The Gwinnett Gladiators are a minor league team based in Duluth, Georgia. The Gladiators play in the South division of the ECHL’s Eastern Conference. The Gladiators also play their home games at Infinite Energy Arena. Although this is an older jersey of the Gladiators, it is ranked as one of the best because of multiple factors. First, the logos on the front of the jersey, as well as the sleeves, are very pristine and not too “in your face” like other jerseys. The colors also work very well together, and the ombre effect that the red has at the bottom of the jersey is simple yet very vibrant. The golden color works really well with the maroon that lines the jersey and also with the back numbers. The logos look sharp on the jersey’s shoulders, and the red cuff detailing helps bring focus to the players’ arms.

The Springfield Falcons were an ice hockey team that was a part of the American Hockey League and played in Springfield, Massachusetts. By 2016 they were purchased by the NHL’s Arizona Coyotes and relocated to Tucson Arizona. This away jersey is a favorite mainly because of the colors chosen. The different shades of blue, along with one white stripe around the waist and arm sleeves, are a subtle but appreciated choice. The talons coming out of the arms on the sleeves are an extremely original and unique choice that has helped the jersey stand out. Design placement plays a huge role in what makes a good jersey, and the Falcons definitely acknowledged that while creating this away jersey. This jersey works really well because of how everything flows together. There are almost no objections to this jersey because it encapsulates the classic NHL jersey but in the minor league.

The Manitoba Moose are a Canadian professional ice hockey team in Winnipeg, Manitoba, and are a part of the American Hockey League. The parent team of this hockey team is the Winnipeg Jets. This is another away jersey that works really well for the minor league team. The color scheme is very understated, and the forest green and gold mesh well together. The wing-style details on the numbers are a unique yet questionable feature of the jersey. The signature moose mascot is not plastered all over the jersey, which is an appreciated feature and the three-toned stripes at the end of the sleeves are also a great addition to the jersey. The moose logo makes the team look strong and aggressive, and the numbers on the sleeves also look nice as well. The two-toned colors on the cuffs look sharp and help pull the audience’s attention toward the players.

The Milwaukee Admirals are an American team that is part of the American Hockey League and reside in Milwaukee, Wisconsin. The light blue color is aesthetically pleasing to the eye. The anchors on both shoulders are also a good way to break up that light blue color, along with having black at the end of the sleeves and a little bit of white. This jersey holds a strong resemblance to the National Hockey League’s Pittsburgh Penguins jersey as well. The pirate logo does a great job of mirroring the hockey players during their game and also is wearing a matching jersey to the jersey it represents. The sleeves are simple, which helps keep the focus on the players’ numbers on the back of their jerseys. The number design is also very crisp and clean, so it doesn’t pull too much focus from the players’ actions.

The Connecticut Whale were an American Hockey League team located in Hartford, Connecticut. Their away jersey is unique, and although it was met with a lot of hate, there are many redeeming qualities about the jersey. The wave-like details at the bottom of the jersey make it stand out compared to other teams. The two different shades of blue along with the white trim along the sleeves and waist do a great job of separating the colors in the jersey. The number detailing on the side of the sleeves with two green stripes behind it matches the green “C” on the front of the jersey, which connects the look overall. Also, the two-toned cuffs at the end of the sleeves match the color scheme very well.

The Ontario Reign team is a professional minor league team in the American Hockey League, located in Ontario, California. The dark navy blue color and orange work really well together, and the logo on the front is not too distracting from the jersey as a whole. The white numbers on the back are complemented by an orange outline around them. The navy blue ombre style on the shoulders is aesthetically pleasing, along with the white sleeves that are really simple. The orange highlights all over the jersey make for some eye-catching details. The ombre effect of orange and blue looks great, and the logo on the front really represents the Ontario Reign team well. The numbers on the shoulders help keep the audience aware of which player is which. Overall, this jersey looks really nice and has a great color scheme that works well together.

The Alaska Aces, also known as the Anchorage Aces until 2003, were an American minor league team in Anchorage, Alaska. The light blue detail color on the jersey is a great addition to the mainly white and black jersey. The simple black numbers on the back also don’t pull too much focus from the rest of the jersey. The logo is also nicely designed, but having a white polar bear with a white background makes the mascot blend into the jersey. The Aces logo on the top of the shoulders helps break it up a little bit more. The logos on the sleeves give off the effect of wings, which helps lift the look of the jersey and make it look nice. The sleeves are simple, and the black helps keep it very grounded. Overall, this jersey has a very clean design and the colors work well together.

The Elmira Jackals were a minor league team located in Elmira, New York. The Jackals were members of the United Hockey League from 2000 to 2007 and then a part of the ECHL from 2007 to 2017. This jersey has a great color palette and is a fan favorite because of its American representation. The red, navy blue, and white color scheme mimics the American flag. The navy blue numbers with red outlining are a unique addition to the jersey. The logo is a great piece and brings the jersey together. The numbers on the sleeve also match the number on the back, along with the red trim that looks very nice. The simple white sleeves keep the jersey looking clean and well put together. The extra lining around the jersey helps break it up in an even way. Overall, the jersey for the Elmira Jackals looks great and represents the team properly.

The Idaho Steelheads are an American minor league ice hockey team located in Boise, Idaho; the team has been in the ECHL since 2003. This jersey has many great things about it. Although its overall color scheme is darker, the dark blue and black work really well together. The white and blue stripes on the sleeves are a great detail. The two-toned cuffs at the end of the sleeves help pull focus to the player’s wrists, which can help bring attention to the slap shots the Steelheads are known for making. The logos on the shoulders help broaden and bring attention to them. The numbers on the shoulders also match the number on the back of the jersey, which leads to a consistent and clean look. Fans love this jersey because of how connected the colors are together and feel it represents the Idaho Steelheads team well.

What do you call a hockey jersey?

A hockey jersey is simply called a hockey jersey in all different levels of hockey, minor, major, etc. Traditionally, it was called a sweater back in the earlier years of ice hockey, but that was when the game was played outside in the cold weather before insulated and temperature-controlled arenas. The National Hockey League acknowledges the shirt as a jersey, but people have argued that just because they are an official institution does not mean that they are correct.

You can purchase an ice hockey jersey in many different areas online and in person. For starters, you can attend a hockey game and purchase an official jersey from the team stores within the stadiums. Dicks Sporting Goods also offers a wide arrangement of hockey jerseys if you can not attend official hockey games. The NHL also has a website where you can go online to purchase jerseys as well.

Hockey jerseys vary in price depending on who’s jersey you are trying to purchase. Jerseys typically can cost anywhere between $75-$300 based on the type of customization and personalization you are trying to add to the jersey. It costs companies like the NHL around $75 to make an official hockey jersey. Different factors can also play into price, such as how well the team does that year and if a particular player is retiring or not.

You can find cheaper NHL jerseys at various websites, although the downside to this is that they are not official jerseys. People can also purchase pre-owned jerseys that may be damaged and therefore listed at a lower price because of any wear and tear the jersey may have endured. Nonetheless, it does not matter what type of jersey you own as long as you are representing your favorite team loud and proud.