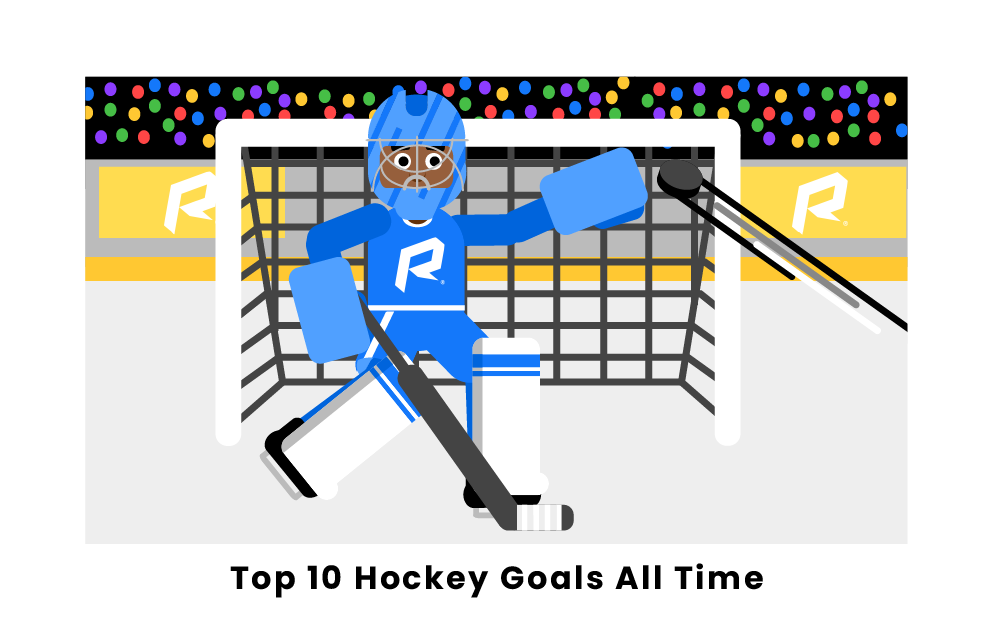 What are the best hockey goals of all time?

Wayne Gretzky is nicknamed the "The Great One." On March 23, 1994 Wayne Gretzky statistically became the best scorer in the history of the NHL. Gretzky scored his 802nd career goal, passing Gordie Howe for the most goals of all time. Gretzky scored the goal with the Los Angeles Kings, against the Vancouver Canucks. With 14:47 on the clock in the second period of the game, defenseman Marty McSorely passed the puck to Gretzky on a power play, leaving him essentially in front of an open net. All Gretzky had to do was tap the puck in, which he did. Gretzky's goal came in front of a sold out crowd and "The Great One" threw his hands up in celebration after scoring the historic goal. This goal is especially impactful because Gretzky still holds the record for most all time goals, and most all time points. In fact Gretzky was so dominant that if you took away his 894 career goals, he would still be the NHL's all time points leaders, with assists alone.

If you ask a non-hockey fan to talk about any moment in hockey history, the moment they're most likely to tell you about is the Miracle on Ice. The goal that won the Miracle on Ice for the US, giving them a 4-3 lead over the Soviet Union, was Mike Eruzioni's goal. Eruzioni was old for the US team, at 25 years old, because of the amateur status that still existed in 1980. In part due to his age, and due to his leadership qualities, Eruzioni was named captain of the US Olympic team. No one gave Eruzioni's squad a fighting chance to win the gold medal, especially not when they had to face the Soviet Union. In the semi-final match where the US did face off against the Soviet's, the US went down 3-2 but eventually tied the score. Then, with ten minutes left, Eruzione scored on a set play, giving the US the lead.

The best defender of all time, Bobby Orr, took this shot in game four of the Stanley Cup. Not only was it the Stanley Cup but May 10, 1970 was also mothers day. In overtime Orr moved towards the crease and cut to his left. Though he claims he jumped, evidence shows that Orr was tripped by defender Noel Picard. Either way, once he was in the air, Orr managed to score and started to celebrate his championship winner. This iconic image was captured by the media and is now famous, along with the player himself. This goal was ranked as the number one hockey goal all time by The Sportster. This shot has the perfect combination of skill, timing and impact.

4. Alexander Ovechkin's "Off The Back Goal"

Of all the best hockey shots, this one might be the most impressive based purely on skill involved. To put it shortly, Alexander Ovechkin scored this goal while on his back, away from the net, not looking, over his head. Ovechkin, now a certifiable legend of the NHL, was in his rookie season when on January 16, 2006 he scored what is now called "The Goal." Ovechkin took the puck in the neutral zone on the right side of the ice. He skated up and got in front of the net where he tried to cut over to the left. Instead, his skate caught the ground and he fell. While sliding on the ice, Ovechkin reached over his head and without looking flicked the puck into the net past the goalie. This goal absolutely took some luck, but there is a reason it was ESPN's number one most creative goal of all time, it is downright one of the best shots ever.

If you have a skill named after you, you must have done something pretty special. That is exactly what Peter Forsberg did in the 1994 men's hockey winter Olympic final. Forsberg, who played for Sweden, found himself stepping up in a shootout with Canada and their goalie Corey Hirsch. The score of the game was tied 2-2 and the shootout was tied as well. Forsberg, a young amateur stepped up to the puck. He skated towards Hirsch and deked a few times. Then, he skated to the left while extending his right arm holding his stick. He gently pushed the puck past Hirsche's extended glove. The move surprised just about everyone, including the announcers who sounded almost in awe of what they had just seen. Moments later Forsberg's teammate would stop Canada's shootout attempt, winning the gold medal for Sweden. Cameras captured the shot from above and the picture ended up becoming a Swedish royal stamp, celebrating Forsberg's move. Later in 2006, Forsberg would use the move in the NHL and to this day players will use the move, now known as "The Forsberg."

If Mike Eruzioni's shot is the one with the most cultural impact, this one is a clear second. The shot itself is not all that impressive but the effect it had was. Canada was playing against the Soviet Union in the 1972 Summit Series. The teams had gone back and forth, one team would win and then the other. Game three was tied so the record between the two teams was 3-3-1. The eighth game was the decider. The games were brutal and violent and tensions were high as the Cold War was around its height. In the last couple minutes of the 3rd period, Paul Henderson took a shot. He missed but the puck was recovered by teammate Phil Esposito. Esposito took a very weak shot that was blocked by the Soviet Goalie Vladislav Tretiak. Tretiak failed to pick up his rebound and Paul Henderson snuck around, recovered the puck, and scored, winning the game for Canada. This goal was ranked as the number two greatest goal in history by The Sportster.

It seems only logical that the hardest shot in NHL history should probably be on the list of top ten shots of all time. This was achieved by Zdeno Chara of the Boston Bruins during the 2012 NHL All-Star hardest shot competition.

Chara has won the competition five times. Chara's shot in 2012 clocked in at 108.8 miles per hour, setting the bar for the hardest shot ever recorded. Chara held the record for hardest shot until 2020 when Martin Frk of the Ontario Reign hit 109.2 during an AHL All-Star game. Though Frk technically holds the record, more people remember Chara's shot, because it was taken during an NHL hardest shot competition, and because of the name recognition of a popular player. At that point, Chara had won four straight hardest shot competitions. The entire arena, including the players, stopped to watch Chara knowing he was going to do something special. Chara delivered and the hockey world loves it.

8. Marek Malik's "Between the Legs" Goal

If Peter Forsberg's shootout shot was surprising, it is hard to describe what this one was. On November 26, 2005 the Washington Capitals and the New York Rangers got into a shootout to decide the game winner. After fifteen rounds neither team could pull ahead. That is when Marek Malik stepped up to take his shot. So far into the 2005 season, Malik had zero goals. In fact Malik was not known to be a goalscorer at all. He was a defenseman who was good at his job, and obviously good enough for the NHL but was not regarded as someone fast and quick handed. That is why, when Malik went between his legs, and flipped the puck into the goal with his stick between his legs and behind him, everyone was shocked. This shot not only helped secure the win for the Rangers but sent everyone in the arena, including the players and announcers, into a frenzy. Today, it is pretty common to go between the legs in a shootout but one of the first to try and succeed with that shot was Marek Malik, a little-known defenseman who now has one of the best shots of all time.

Technically speaking, the first goalie to ever score a goal was Bill Smith. In a game, Smith was the last player on the Islanders to touch the puck before Rob Ramage of the Colorado Rockies scored an own goal. This gave Smith the credit for a goal, though he didn't score it into the net. The first goalie to legitimately score a goal is Ron Hextall. Hextall was known for being the best puck-handling goalie and he was talented at keeping the puck out of the net. However, on December 8, 1987 Hextall and his Flyers were playing a game against the Boston Bruins. In that game, Boston pulled their goalie when they were down 4-2. Hextall got the puck, and seeing an opportunity, flipped it all the way down the ice where it slid into the empty net for a goal. This shot is now famous, though Hextall outdid himself by scoring in a similar way in the playoffs during the 1988-1989 season.

Mario Lemieux is considered to be one of the best hockey players to play the game. His arrival into the NHL was highly anticipated, as he was a top amateur and prospect. Lemieux wasted absolutely no time in making his presence known on the ice. On October 11, 1984 Lemiux made his NHL debut for the Pittsburgh Penguins. On his very first shift Lemieux stole the puck from Ray Bourque and broke away from the Boston Bruins defense. Lemieux deked the goalie and moved to his backhand, shooting and scoring on his first ever shot on goal. This goal was not the most impressive, and even was not the most impactful at the time. However, Mario Lemieux represented hope to the Penguins, and a new era. He was probably the most anticipated player ever and his scoring on his first shift is something almost all hockey fans remember or at least have heard about.

What is the most famous hockey shot of all time?

Though there are many shots that could be the most famous, Wayne Gretzky's 802 goal is probably the holder of that title. This goal broke Gordie Howe's all time goal record and set Gretzky as officially the greatest scorer in NHL history. Gretzky's impact on the game, combined with how big the moment was, made his record breaking goal a big deal for all hockey fans. That goal is probably the most famous ever.

Who has the hardest shot of all time?