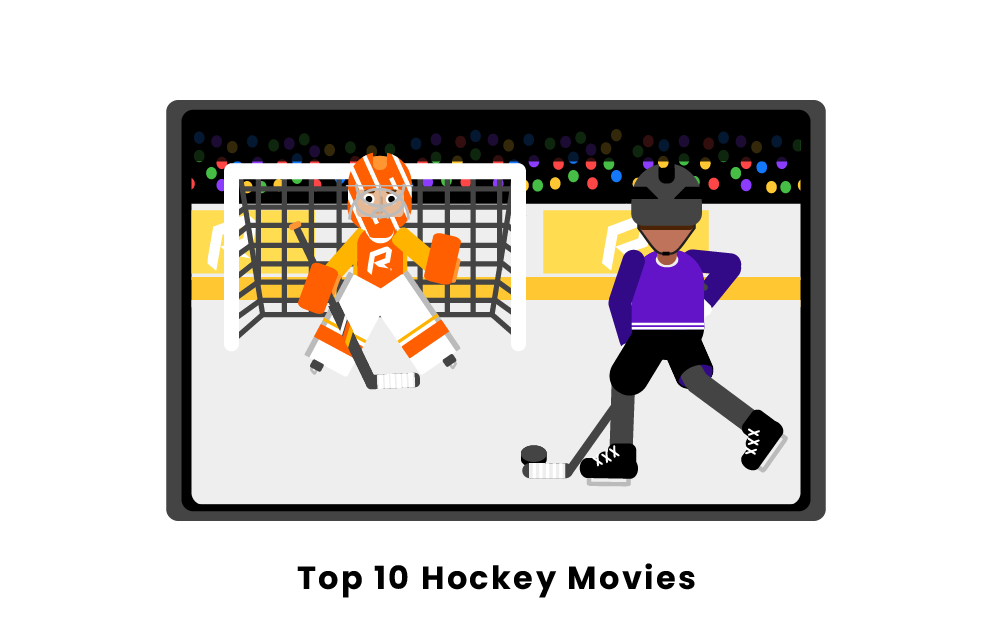 What are the most popular hockey movies?

Miracle is a 2004 movie about the true story of college coach Herb Brooks who was hired to coach the 1980s USA men's Olympic hockey team. A group of collegiate ice hockey players from all over the United States is united over wanting to defeat the favored Soviet team. This team’s dedication and hard work reflect America versus the Soviets during the Cold War. This movie is a tear-jerker and provides a Disney adaptation of something that inspired America for years to follow. Fans of Miracle and ice hockey in general rely on this movie for hope and the idea that hard work pays off when earned. The pregame speech that Herb Brooks gives is truly inspiring and motivating for those who don’t even play hockey. This movie is also known for the goosebumps fans get through each of the trials and tribulations that the American team endures.

The movie Slap Shot premiered in 1977 and instantly captured the hearts and joy of Americans. This cult classic movie is a comedy about a minor league ice hockey team threatened with termination because of layoffs at the town steel mill. The Chiefs resort to violent play during their games to draw in more support from the crowds. Eventually, the coach, Reggie Dunlop, decides that violence was not the way to go and that they should focus on the skills of his players over violent attacks on their opponents. However, by the time this decision was made, their main rivals had already prepared their team with large and extremely violent players. The victory at the end of this movie is comical and joyous for viewers. Although the story behind this movie is laughable, it shows the fun side of hockey while bringing in the importance of skill as well.

The Mighty Ducks is a very successful 1992 film with two sequels afterward because of its popularity with viewers. The plot of this movie involves a self-centered lawyer named Gordon Bombay, who is sentenced to community service coaching a youth ice hockey team. This comedy is a fan favorite because of the positive message that it presents within the movie rather than focusing on the sport of ice hockey. However, the heartwarming story also revolves around the strength and perseverance the hockey team creates throughout the movie and ultimately winning the championship game at the end of the film.

Goon is a heartwarming comedy that follows the story of Doug Glatt, a bartender who found himself signed to a minor league hockey team after fighting in the stands at one of their games. Despite not knowing anything about hockey, he is recruited to the team to be their enforcer, which is comically ironic because Glatt is an excessively nice guy. Goon showcases the always-exciting violent aspects of hockey in a hilarious way, with the climax of the story being Glatt’s matchup with his idol, Ross “The Boss” Shea, taking place in the last game of the regular season.

The Rocket: The Maurice Richard Story is a French-Canadian biopic about the famous NHL player Maurice Richard, also known as “The Rocket.” This movie focuses on Maurice Richard’s life from the start to his journey of joining the Montreal Canadiens. Many familiar NHL faces make appearances in this movie, such as Mike Ricci, Sean Avery, Vincent Lecavalier, Pascal Dupuis, and many others. This film also features the importance and the impact of the Richard Riots, where riots ensued because of an altercation between Richard and a referee. This conflict resulted in Richard being subsequently suspended for the rest of the season by the league. Although the movie is a biopic and the ending is already set in stone, fans can’t help but sit at the edge of their seats because of all the drama during the film.

The story of Walter Gretzky is documented and portrayed in the movie Waking Up Wally: The Walter Gretzky Story. Walter Gretzky is best known for being the father of legendary National Hockey League player Wayne Gretzky. This movie is a heartbreaking and inspiring story by CBC that encapsulates the health issues and the comeback that Walter Gretzky had during his life. In 1991, he suffered a near fatal brain aneurysm which completely destroyed his short term memory. Gretzky then spends his time helping out charities, fundraisers, and assisting a summer youth hockey camp as a coach in California. During his recovery, Walter recounts that the only language he could speak was Ukrainian. Gretzky does not play himself in the movie but instead is portrayed by an actor. This movie features a ton of interesting facts about Gretzky for hockey fans, as well as a touching story about how he overcame the most difficult thing that completely changed his life.

Mystery Alaska is a comedy and drama movie about an extremely small town that gets very excited when their home hockey team is chosen to shoot a television event. The amateur hockey team is set to play against the National Hockey League’s New York Rangers. The story captures fans by showing them that the amateur team may actually have a shot at winning the game against the Rangers. This movie draws in viewers and allows them to feel the emotions and effort that the amateur team put in leading up to the big game, which helped attach fans to each character in the movie. Although the amateur team did not end up winning the game, the match actually ended up being close, and to that, the Rangers and viewers at home applauded them.

Les Boys is a 1997 comedy movie directed by Louis Saia. Viewers have referenced this movie as a more mature version of the Mighty Ducks movie series. The plot of the movie revolves around a lower-level hockey team under the name “Les Boys” that is made up of non-professional hockey players with various “real world” professions. Although the plot of the movie strays from hockey during the middle of it, hockey still remains the primary focus. On the day of the championship game, the team faces off against a much more skilled minor league team. Viewers still love this movie to this day. Although it is not one of the more typically inspiring films, the comedy and hockey playing within it are why it's a fan favorite.

Youngblood is remembered for its inspiring and dramatic story and its star-studded cast, including Patrick Swazey and Rob Lowe. This movie features a 17-year-old farm boy that is offered a tryout for an ice hockey team in Canada, where he must learn the more aggressive side of hockey rather than just utilizing his speed during the games. The main character, Dean Youngblood, goes through many trials throughout the film but eventually works his way to the Memorial Cup Finals and ends up scoring the winning goal within the last three seconds of the game.

The movie Net Worth was a television film that premiered in the 1990s. This film is based on the story of Detroit Red Wings player Ted Lindsay. Lindsay was a nine-time National Hockey League All-Star who worked with Doug Harvey of the Montreal Canadiens to bring together a small but powerful group of players to fight against the owners of the NHL in the 1950s to protect the rights of all NHL players. However, the main focus of this film is the conflict between Lindsay and the manager of the Detroit Red Wings, Jack Adams. Lindsay went through many tough moments during his time fighting against the NHL, including threats against him from NHL owners and having to win over his teammates to join his fight. The key point to this movie is that Lindsay and Harvey formed an “association” and not a “union,” which helped them avoid a larger wrath from the team owners. Fans love how Net Worth highlights NHL labor laws that are still evolving to this day.

Pond Hockey is a documentary that premiered in 2008 about the changes to the sport of pond hockey into ice hockey over the years. This documentary interviews famous hockey players like Wayne Gretzky,  Sidney Crosby, and Neal Broten, among others. The stories told by past and former NHL stars add an interesting perspective and a lot of value to the documentary. Fans found this documentary interesting and informative about the history of hockey while also focusing on how the sport has changed over time. Pond Hockey also intertwines the story of the first-ever United States Pond Hockey Championship. The championship features over 100 different teams, and the documentary focuses on the two main teams of the tournament.