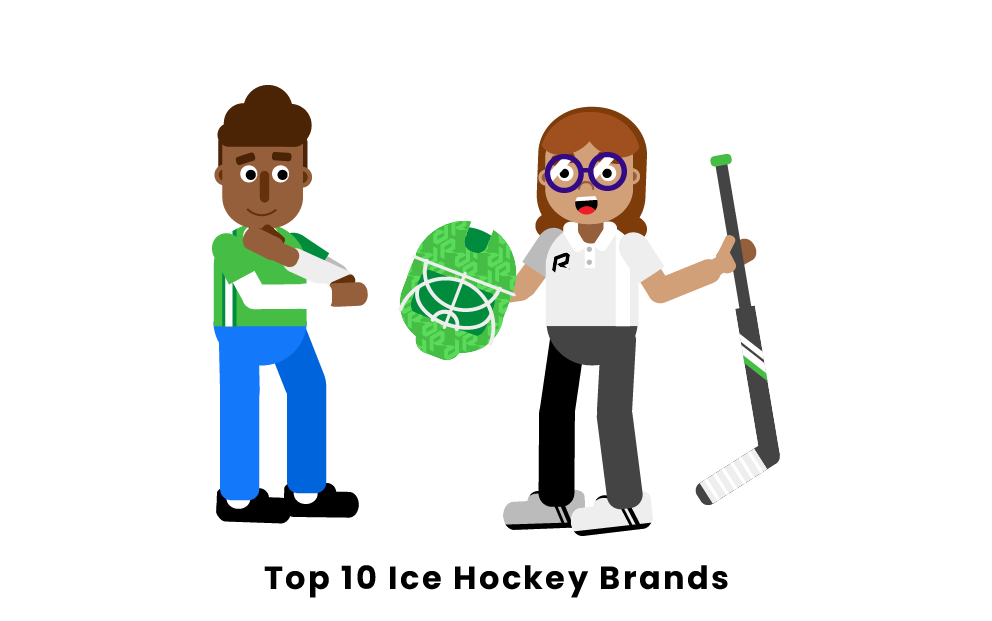 Hockey is a fun and competitive winter sport, with many companies creating equipment and safety gear for the sport. This list compiles the most popular brands for players of any level.

What are the most popular hockey brands?

Bauer is one of the largest lead manufacturers for hockey equipment. The brand is owned by Nike and was founded in 1927. The company sells ice and roller hockey equipment directly off their website or through retailers around the world. Bauer works with the NHL to promote their brand, and sponsors some of the biggest names in hockey such as Patrick Kane, Jack Eichel, and Auston Matthews. Bauer and hockey brands Mission and Easton are all under the same parent company, Performance Sports Group Ltd. All in all, Bauer remains one of the world's top hockey brands and continues to dominate the industry.

Like Bauer, CCM sells both ice and roller hockey equipment, with CCM headquarters in Canada, and Bauer in the US. CCM was founded in 1899 and is partnered with Reebok, so it has connections outside the hockey world, like Bauer's relationship with Nike. This helps CCM expand into other areas of sports, create revenue in the sports industry, and sell apparel. Some of CCM's biggest names in terms of sponsorship include Connor McDavid, Alex Ovechkin, and Brent Burns, among others. These sponsorships help CCM to grow their brand and pursue new customers. Overall, CCM is a dominant force in the hockey equipment industry, but is still second to Bauer.

Warrior is a diverse brand that produces equipment for a variety of sports. Its two main sources of income come from hockey and lacrosse. It was founded in 1992, and is located in Warren, Michigan. Warrior began as a lacrosse equipment company but was bought by New Balance in the early 2000s, and subsequently entered into the hockey industry. Warrior is a big brand in hockey, and sponsors big names in the NHL like Leon Draisaitl, Dylan Larkin, and Brad Marchand.

TRUE is a large hockey brand used commonly by NHL players. TRUE also produces equipment for lacrosse, baseball, and golf, and only recently got into the hockey scene. They only have a few big names that they sponsor because they are relatively new in the industry, but their sponsors include players like Mitch Marner, Connor Hellebuyck, and Ryan Johansen. TRUE is on the rise, and should be a top player in the hockey equipment industry for years to come.

Graf is a hockey brand that has an emphasis on hockey skates. They are known for making very comfortable and innovative skates that help hockey players play comfortably. They also produce sticks, gloves, and protective equipment. The company was founded in 1921, but started to produce hockey equipment exclusively in 1975. Before this, the company sold hiking, biking, and soccer equipment alongside their hockey equipment. This brand is seen often in the NHL and also in youth and amateur hockey.

Sher-wood is an up and coming hockey equipment company, founded in 1949 in Sherbrooke, Canada. They have supplied the official game pucks of the NHL since 2008. As for player sponsors, Sher-wood does not have any big names in the NHL, and not many players use Sher-wood's sticks, gloves, or protective equipment. However, it is still a brand seen in hockey stores and occasionally in the NHL.

Reebok is a sports giant that sells products for a variety of sports. In 2005, the company was bought out by Adidas along with CCM, which Reebok is a parent company of. Reebok has produced hockey equipment for years, but was never the biggest name in hockey, selling sticks, gloves, safety gear, and helmets. However, Reebok owns CCM, meaning they still have their name in the hockey industry, just not under the Reebok name. In the early 2010's, Reebok stopped producing hockey equipment under the name Reebok entirely, and shifted all their focus in hockey to CCM. Going forward, you will not see any hockey equipment branded under Reebok, but because of their ownership of CCM, they are still big players in the hockey industry.

Easton was officially founded in 1985, and produces equipment for many different sports, including tennis, lacrosse, baseball, and hockey. They have had great success in the hockey industry, and in the 1990's, they signed hockey legend Wayne Gretzky to a contract. Nowadays, Easton has focused on other sports, leaving its hockey equipment out of the picture. You won't see any Easton equipment in the NHL anymore, but the company makes this list because of its past successes.

STX is mainly a lacrosse company, but has recently moved into the hockey industry. The company was founded in 1970 as a lacrosse stick supplier, but has started to produce hockey sticks, gloves, and protective gear. You won't see much STX gear in the NHL, but their products are sold in many hockey stores around the world.

Tour Hockey is a relatively small hockey equipment brand that specializes in roller hockey. Although they do produce some ice hockey equipment, they are one of the few companies that place their focus on roller hockey. They sell mostly to amateur and youth roller hockey players, as you won't see any NHL players wearing Tour gear. Their skates are well known in the roller hockey community as top quality and have been very successful in this industry.