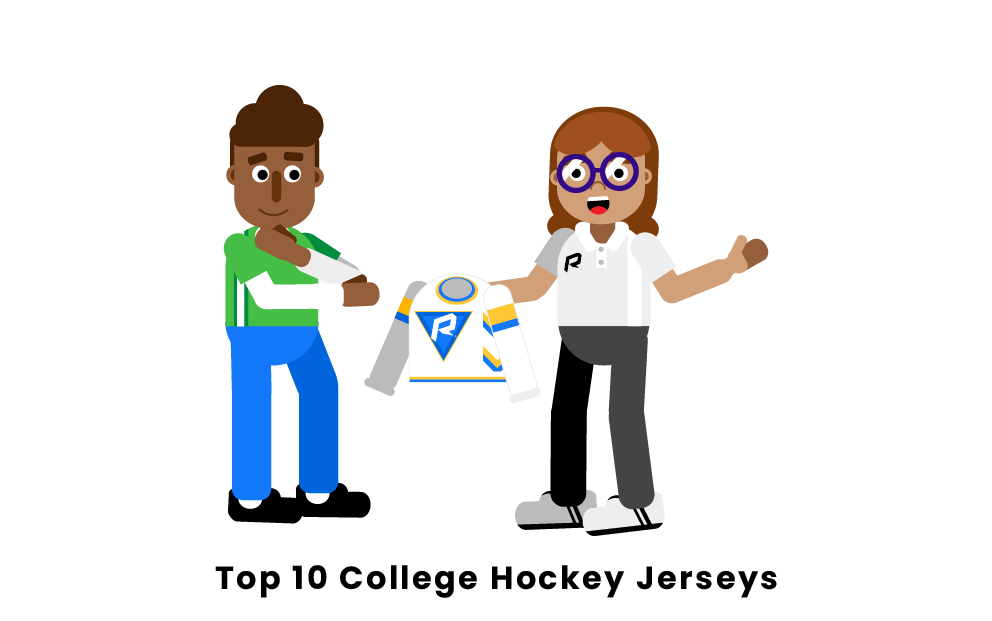 What are the most popular college hockey jerseys?

The University of Minnesota Duluth Bulldogs represents themselves with maroon and gold. The first set of their jerseys are mainly white, with gold and maroon details. The shoulder pads and the bottoms are maroon. Their second set of jerseys are mainly maroon with minimal white and gold details. All the jerseys have a gold bulldog on the front. Overall, the jerseys are rich in color and have a unique color set.

The Bulldogs are members of the NCAA Division I College Ice Hockey. They are also a part of the National Collegiate Hockey Conference (NCHC). Their home arena is the AMSOIL Arena. The University of Minnesota Duluth Bulldogs won the NCAA Championship in 2011 and two years in a row in 2018 and 2019. Since the 1970s, they became the 3rd team to win consecutive championships.

Boston University, also known as the Terriers, have a classic, easily recognizable jersey. The white and red color combination is simple and goes well with one another. The jerseys usually have a distinctive “Boston” or “Boston University” in a simple font on the front of the jerseys, making them distinguishable from other Boston schools.

Their hockey team has two main jerseys, one in which they usually sport a white sweater with red bottoms. Or their other jersey, in which both the sweater and bottoms are red. Overall, the BU hockey team’s jersey is clean-cut and minimal.

The team has won five national championships and 37 tournament and conference regular-season titles. BU’s home arena is the Agganis Arena. Some of the notable players to go to the NHL from BU include Chris Drury, Tony Amonte, John Cullen, Jack Eichel, and Kevin Shattenkirk.

The Eagles are part of the NCAA Division I College Ice Hockey and compete in Hockey East Conference. Their home arena is the Silvio O. Conte Forum. BC has won the NCAA championship tournament five times, in 1949, 2001, 2008, 2010, and 2012. Boston College is considered one of the top-rated college hockey teams.

The University of Maine, also known as the Black Bears, sports a dark blue, light blue, and white color scheme. The team has two main jerseys, the first one being a predominantly dark blue jersey with light blue accents and a few white details. The other jersey is predominantly white with a few dark and light blue details. The shades of light and dark blue complement one another in the two-tone jersey. The “Maine” on the jerseys has a unique script, which completes the whole look. The two-tone color scheme isn’t very common, making their jerseys distinguishable from others in the league.

The Black Bears are part of the NCAA Division I College Ice Hockey program. Their home arena is the Alfond Arena. The team has been a part of 11 Frozen fours previously. They have won the national championship twice, in 1993 and 1999.

Pennsylvania State University, also known as the Nittany Lions, represent the colors blue and white on their jerseys. Most of the jerseys have a clean white look with dark blue details. The jersey looks simple, and the white helps the dark blue color pop out. Their other jersey sets are the opposite, which are all dark blue with minimal white details. PSU does not have any shoulder markings or any unnecessary details. The front of the jersey has the Nittany Lion logo.

Penn State is a part of the Big Ten Conference, and their home arena is the Pegula Ice Arena. Since 1971, the school has had a club hockey team named The Icers. The Icers have previously won seven national titles for the American Collegiate Hockey Association. After years of playing, PSU established their Division I men’s and women’s hockey team and began to play during the 2012-2013 season.

Michigan Tech, also known as the Huskies, showcases black and gold on their jerseys. One set of their jerseys are black, with gold color-blocked in the chest with “Michigan Tech” scripted on it. They have another set of jerseys, predominantly gold with minimal white and black details. Lastly, they have a cream uniform with a few black and gold details. Their jerseys do not have any shoulder markings and just remain a solid color. Overall, this jersey pops out due to its minimalism and the gold and is a fan favorite.

The Huskies are members of the NCAA Division I College Ice Hockey program and the Western Collegiate Hockey Association (WCHA). Their home arena is the MacInnes Student Ice Arena. The team has won the NCAA national championship three times, in 1962, 1965, and 1975.

The University of Notre Dame, also known as the Fighting Irish, represents blue and gold on their jerseys. One set of their jerseys are white, with blue and gold details, while their other jerseys are blue, with white and gold details. Both jerseys have blue bottoms. What makes the Fighting Irish’s jerseys unique is the gold helmets they wear. This makes their outfits stand out and has not been seen with other teams.

The Fighting Irish are members of the NCAA Division I College Ice Hockey and an associate member of the Big Ten Conference. Notre Dame joined the Big Ten in the 2017-2018 season and left the Hockey East. Their home arena is the Compton Family Ice Arena. Although they have not won an NCAA championship yet, they were runner-ups in the tournament in 2008 and 2018.

Michigan State University, also known as the Spartans, showcases the colors green and white on their jerseys. The first set of their jerseys are white, with green detailing on the shoulders and logo. The shoulders have a logo of the spartan. The second set of their jerseys are the opposite, in which they are predominantly green with white detailing. Both jerseys have “Michigan State'' in the front with their unique font and have green bottoms. All the players wear green helmets. The green on the jerseys makes the Spartans stand out from the other teams.

The Spartans are in the NCAA Division I College Ice Hockey and participate in the Big Ten Conference. Their home arena is the Munn Ice Arena. Michigan State has won the NCAA national championships three times, in 1966, 1986, and 2007. They were runner-ups of the tournament in 1959 and 1987.

Northeastern University, also known as the Huskies, sports a red, white, and black color scheme on their jerseys. Although they aren’t the only team with a husky as a logo, their color scheme makes their jerseys easily identifiable. The white jersey has “Northeastern” in red on the front with black and red stripes. The black jersey has “Northeastern” written in red and highlighted in white. This jersey has white and red stripes. The stripes on both jerseys are around the sleeves and bottom of the sweater. Both the jerseys have black and red paws on the shoulders with black bottoms. They also have a black and white husky logo on the front of the jerseys.

Northeastern Huskies are members of the NCAA Division I College Ice Hockey and compete in the Hockey East. Their home arena is Matthews Arena in Boston. They have won the Hockey East Conference Championship three times, in 1988, 2016, and 2019, but have never won the NCAA title.

The Tigers are part of the NCAA Division I College Ice Hockey and the ECAC. Their home arena is the Hobey Baker Rink. The Princeton Tigers have won the ECAC Tournament Championship three times, in 1988, 2008, and 2018. They haven’t yet won a national championship or reached the Frozen Four.

The price varies on hockey jerseys, depending on where the customer will purchase them from. If purchased from the school directly, the price can range from $50-$150. Usually, the school’s official bookstore website will have them at a higher price, but they will 100% be authentic. They can be purchased at a lower cost from thrift stores, in which they might be less than half the price.

Multiple places sell hockey jerseys for cheap, but usually, they will be second-hand. eBay is a good option as many jerseys are sold there. When purchasing, remember to read reviews of the sellers and find a way to authenticate the jersey. If the seller seems promising, this is a great place to buy it. Purchasing second-hand jerseys from thrift stores or other online retailers are the cheapest ways to get a college hockey jersey, but look out for fake or damaged jerseys.

Can you purchase customized jerseys?

Customers may wish to customize their jerseys, and there are many options available to find them. Two websites to start from would be hockeymonkey.com and owayo.com. They have different customization features and allow you to tailor the jersey to the customer’s specific liking. Customization on jerseys is very popular and can add a unique twist to the regular ones.