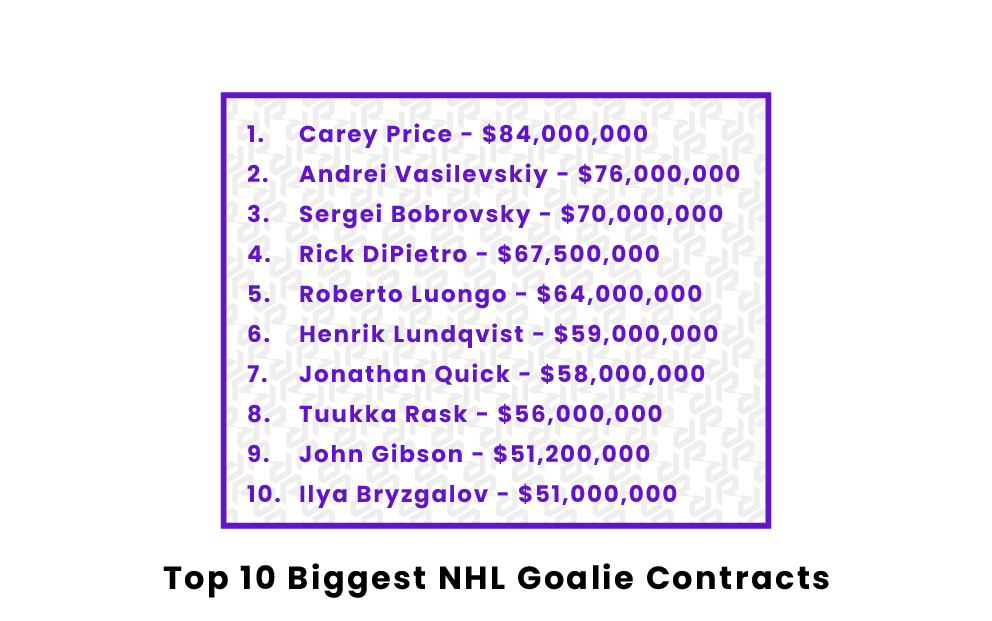 Hockey goaltender is often said to be the hardest position to play in all of sports. They are the last line of defense, responsible for stopping a tiny piece of rubber from entering a 6’x4’ frame. Despite the difficulty of the position, goaltenders are seldom the highest-paid member of their team in hockey. However, the guys on this list are famous for having the biggest NHL goalie contracts of all time.

What are the Biggest NHL Goalie Contracts of All Time?

Carey Price’s $84 million deal pays an annual average value (AAV) of $10.5 million– the only NHL goaltender contract to surpass $10 million per year. Price’s contract is the biggest ever by an NHL goalie and one of the biggest contracts by any NHL player of all time.

Price has many accolades, including a Hart trophy and a Vezina trophy in 2014-15. Price also has an Olympic gold medal and a Stanley Cup finals appearance. Price, under contract through the 2024-25 season, will likely be unable to complete his contract due to health issues.

Andrei Vasilevskiy signed a massive contract on July 29th, 2019; the $76,000,000 deal is eight years long, coming with an AAV of $9.5 million. Vasilevskiy is a force in the net: he won two Stanley Cups in his first five years as a starting goaltender. He also put together some record-smashing performances in the two playoff runs that resulted in Tampa Bay’s championships: Vasilevskiy recorded 20.8 goals saved above expected (GSAx) in the 2019-20 playoffs, and 26.6 GSAx in the 2020-21 playoffs. Both are league records.

One key difference between Price and Vasilevskiy’s contract is when they each signed their deal. Price was about to turn 30 when he re-signed with Montreal, while Vasilevskiy signed his deal just five days after turning 25.

Sergei Bobrovsky’s seven-year $70 million contract is the first on this list to be signed from free agency, rather than an extension on a goalie already under contract with a team. Bobrovsky signed the deal on July 1st, 2019. On the day of signing, the Russian goalkeeper was 30 years old.

At the time Bobrovsky signed the deal, he looked like a pretty solid investment: Bobrovsky and Artemi Panarin had just carried the Blue Jackets through a first-round sweep of the President’s Trophy-winning Tampa Bay Lightning. In the ensuing free agency period, Panarin and Bobrovsky both cashed in big time.

On September 12th, 2006, Garth Snow signed Rick DiPietro to a 15-year, $67,500,000 deal. The 2013 collective bargaining agreement (CBA) capped contracts to a max of seven years or eight years for players re-signing with a team. However, back in the early 2000s, deals like DiPietro’s were not unheard of.

Since DiPietro’s deal is so long, the massive sum of money divides into only $4.5 million per year, which is a typical AAV for a common goalie in the 2020s. DiPietro was anything but a common goalie, however. He was drafted number-one overall in 2000.

Roberto Luongo's biggest and final contract saw him receive $64,000,000 over 12 years– an AAV of $5,333,333. He was selected fourth overall in the 1997 NHL draft and had a historic 19-year NHL career. Despite being in the league so long, Luongo only ever had four contracts. The first three deals paid him just under $36 million over nine years. Then,

Luongo retired in July 2019, two years before the conclusion of his last contract. Luongo’s biggest career accolades include a Stanley Cup appearance in 2011, a Hart trophy in 2007, and a Lestor B. Pearson award in both 2004 and 2007.

The contract that puts Henrik Lundqvist on this list is a seven-year, $59.5 million deal signed in December 2013. Lundqvist, often nicknamed “The King,” was a goaltender for the New York Rangers from 2005 through 2020. Lundqvist was a diamond in the rough, selected in the seventh and final round of the 2000 NHL Draft. 204 players were selected before Lundqvist in the draft! Lundqvist was paid an AAV of $8.5 million over the course of this deal.

Jonathan Quick signed a deal on July 1st of 2012 for $58 million over 10 years, with an average of $5.8 million per year. Previously, he earned a Conn Smythe trophy in 2012 for leading his team to a Stanley Cup victory while making just $1.8 million per year. Quick won another Stanley Cup with Los Angeles in 2013-14, beating the New York Rangers. Quick is still working on his 10-year deal, which has him under contract through the 2022-23 season.

Peter Chiarelli signed Tuukka Rask to his biggest deal, which paid him an average of $7 million over eight years. Rask spent the majority of his career with the Boston Bruins, despite being a former first-round pick by the rival Toronto Maple Leafs.

John Gibson’s eight-year, $51.2 million deal pays an average of $6.4 million. Gibson is under contract through the 2026-27 NHL season. Gibson signed this deal in August of 2018 at just 25 years of age. Gibson was a second-round draft pick in 2011 and has spent his entire career with the Anaheim Ducks. Right from the start, Gibson was a dominant goalie: he recorded a shutout in his first-ever NHL contest.

Bryzgalov was drafted by Anaheim, who at the time were the Mighty Ducks of Anaheim, in the second round of the 2000 NHL Draft, which saw many goalies on this list selected. Bryzgalov played for Anaheim, Phoenix, Philadelphia, Edmonton, and Minnesota throughout his 15-year career. He retired four years prior to the completion of his final contract.

Who has the biggest NHL goalie contract of all time?

Carey Price has the biggest NHL goalie contract of all time, at $84 million. Price also holds the biggest current contract, as that deal is in effect through 2025. It seems as though Carey Price is considering retiring, as he has many health issues due to lingering injuries. Price was able to go out with a bang, at least, carrying his Canadiens to a 2020-21 Stanley Cup appearance.

Who has the biggest NHL goalie contact by yearly cap hit?