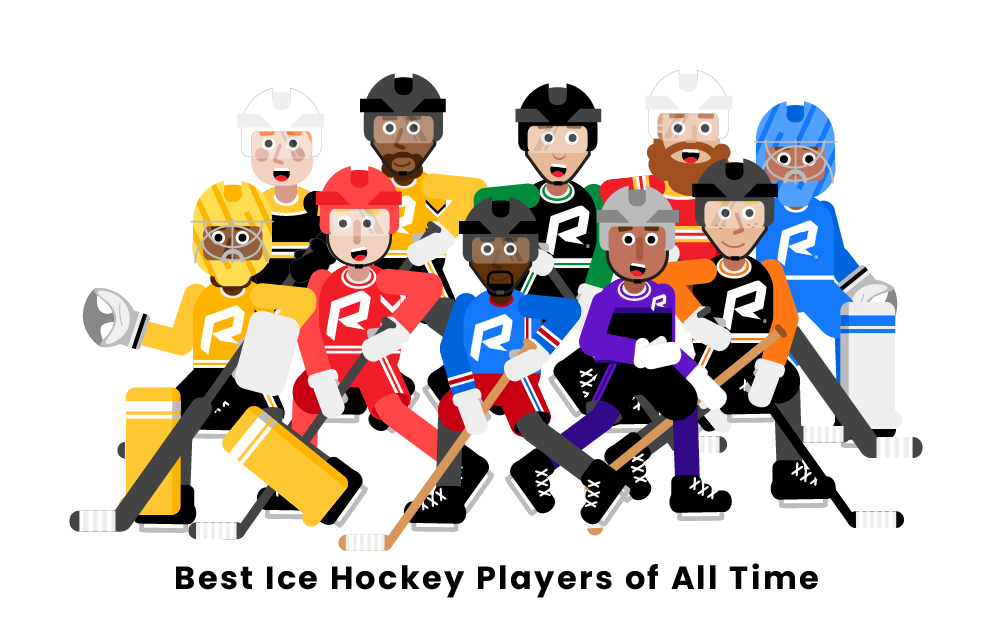 Ice hockey is one of the most difficult sports to play, as it requires extreme physical fitness, sport-specific skills, and a lot of mental toughness. Over the years, certain players have distinguished themselves through their talent on the ice. Below are the ten greatest hockey players of all time and the different styles of play they utilized to make their mark on the game.

Wayne Gretzky is one of the most dominant athletes in the history of sports, let alone the game of hockey. “The Great One,” as he was known, recorded 894 career goals and 1,963 career assists, both of which are the most of all time. This gave Gretzky a career total of 2,857 points, a feat so remarkable that no other player in NHL history has ever reached 2,000 career points.

He would win his first league MVP at age 19, and would follow that up by winning the trophy the next seven seasons. No player in NHL history had ever scored 200 points in a single season until Gretzky did it for the first time during the 1981-1982 season. He would record three more seasons with 200+ points, a barrier no other player has ever crossed. Gretzky retired as the owner of 61 NHL records, including a 51-game point streak that will likely never be broken. Wayne Gretzky is so revered by the NHL that every team in the league has since retired his number 99.

Mario Lemieux recorded one of the most impressive careers in the history of the NHL, which is even more remarkable when his injury and illness history is taken into account. He would help turn the Penguins around following his selection with the first pick in the 1984 NHL Draft. Lemieux burst onto the scene as a rookie with over 100 points and the Calder Trophy given to the NHL’s Rookie of the Year. His first career goal came in his very first shift of his first game, as he stole the puck from NHL legend Ray Borque and scored.

Lemieux has the most points in a single season by anybody not named Wayne Gretzky. In fact, with the exception of Gretzky, Lemieux has the four highest-scoring single seasons in NHL history. Some of the most remarkable feats in NHL history were recorded by Lemieux, as during his career he would record a 46-game point streak, scored a hat trick less than seven minutes into a playoff game, and once scored for “the cycle,” the only time that would ever happen in NHL history. “The cycle” includes scoring a goal in all five of the different possible variations during an NHL game: even strength, shorthanded, on the power play, on a penalty shot, and an empty net. Lemieux would retire with 1,723 career points, the 8th most of all time.

Gordie Howe played in 1,767 NHL games across 26 years, playing in his final NHL game at age 51. Called “Mr. Hockey” in honor of his impact on the game, Gordie Howe was the face of the NHL due to his size, skill, speed, and charming personality. During his lengthy career, Howe recorded 22 consecutive seasons with at least 23 goals, leading the league in goals during five of those seasons. He dominated on the ice not just with his skill and speed, but also by overpowering and intimidating his opponents.

The term “Gordie Howe hat trick” is known as recording a goal, assist, and a fight all in one singular game as a nod to the style of play that Howe popularized. He recorded 1,850 career NHL points, the fourth most all-time, and was the first player to score 1,000 career points. At the time of his retirement, Howe was the NHL’s all-time leader in games played, goals, assists, and points, all records which have since been broken.

Mark Messier is one of the most iconic players in NHL history, and for good reason. Messier was best known for his leadership abilities and all-around toughness, but that doesn’t mean he wasn’t also one of the most talented players on the ice. Many often compared Messier to Howe due to the way that both players could dominate with their skill or intense physicality.

In one of the most iconic incidents in NHL history, Messier famously guaranteed that the Rangers would win against the New Jersey Devils during the 1994 Eastern Conference Finals despite being down 3-2 in the series. During Game 6, the Devils were leading 2-0 late in the second period before Messier decided to make good on his promise, recording an assist to Alexei Kovalev before netting a hat trick to give the Rangers a 4-2 victory. He would captain that Rangers team to its first Stanley Cup since 1940, ending one of the longest championship droughts in NHL history. Messier would also win five cups during his tenure with the Edmonton Oilers, including two of them during his tenure as captain after the departure of Wayne Gretzky.

Bobby Orr is often referred to as the best defenseman in NHL history despite only playing 36 career games after the age of 26. Orr struggled with injuries later in his career, specifically retiring at age 30 due to the excruciating pain in his knees. During his 12-year NHL career, he was a nine-time all-star, won the Calder Trophy as Rookie of the Year, won the Ted Lindsay Award twice, and revolutionized the defenseman position.

No defensive player had ever made an impact on the offensive end quite like Orr did, as he was the first defenseman to lead the league in points. He is the only player to ever win MVP, the Art Ross Trophy, the Conn Smythe Trophy, the Stanley Cup, and the Norris Trophy, all in a single season, which he did during the 1969-1970 NHL season. He has nine career hat tricks, more than any other defenseman, and also was the first NHL player to ever record 100 penalty minutes in the same season as scoring 100 points, a feat he would repeat three other times. He would also lead the league in assists on five separate occasions.

Steve Yzerman played 22 seasons in the NHL with his big dream being to win one. Not only did he win three, but he was a crucial piece to getting his team there and then sealing the victory. Nicknamed “The Captain,” Yzerman helped the Detroit Red Wings hoist the Stanley Cup three times over the course of six seasons. Yzerman was never the most exceptionally skilled player on the ice, but he still managed to be just one of the eight players in NHL history to retire with more than 600 goals and 1,000 assists.

Best known for his intensity and competitive desire to win, Yzerman would be selected to ten NHL all-star games, while also setting Red Wings records for goals, assists, and points in a single season. During the 2002 Stanley Cup Playoffs, Yzerman was famously dealing with a knee injury so severe that it required a realignment surgery. However, he did not miss a single shift and would lead the Red Wings in scoring that postseason with 23 points en route to his third Stanley Cup and the Conn Smythe Trophy.

Sidney Crosby entered the league with more hype and expectations than nearly any other player in NHL history, and he has yet to disappoint. As the only active player on the list, Crosby has time to continue to add to his already impressive accolades. “Sid the Kid,” as he’s called, was named the captain of the Penguins at just age 19 and would go on to lead them to a Stanley Cup at age 21, which made him the youngest player to ever be captain of a Stanley Cup-winning team.

He unfortunately missed the better parts of three seasons during his prime due to concussion-related issues, but he returned in spectacular fashion. Following his battles with concussions, Crosby would come back to lead the Penguins to back-to-back Stanley Cup victories, while also winning the Conn Smythe Trophy both years, making Crosby just one of three players to win back-to-back Conn Smythe Trophies.

Guy LaFleur is an explosive scorer that was well-known for his ability to create scoring opportunities when it appeared as if there weren’t any. LaFleur was the first player in NHL history to ever score 50 goals and 100 points in six consecutive seasons, leading the league in points three times during that span. The playoffs were where LaFleur really shined, as he recorded the most points in the postseason three separate times. His silky-smooth, creative style of play allowed him to succeed even as opponents chopped at and attempted to overpower him.

LaFleur holds Montreal Canadiens franchise records for regular season points, assists, game winning goals, and the six highest point-producing seasons in franchise history. His teammates and peers were shocked by his charisma and ability to continue to perform at such a high level under extreme pressure and physical harm.

Maurice Richard was a dominant forward for the Montreal Canadiens over the course of his 18 year career. “The Rocket”, as he was known, grew up as a Canadiens fan before eventually becoming a hero for the franchise in his own way. Beloved by Canadiens’ fans, Richard would carry defenders around on the ice as he imposed his will, leading the league in goals five times and making 14 all-star teams. He earned his nickname due to the speed and power with which he played, resembling that of a rocket.

During the 1945-46 NHL season, Richard became the first player in NHL history to ever score 50 goals in a season, doing so in a regular season that consisted of just 50 games. He would also go on to become the first player in NHL history to eclipse the 500 career goal mark, finishing with 544 goals. In honor of Richard's remarkable scoring ability, the NHL’s award for the leading goal scorer every season receives the Maurice “Rocket” Richard Trophy.

Bobby Hull is one of the highest-scoring players in NHL history, and he did so utilizing his incredible physicality. People have estimated that Hull’s slapshot could reach up to 119 MPH, which would absolutely shatter the current World Record of 108.8 MPH held by Zdeno Chara.

Hull had a slow start to his career, at least by his own standards, recording just 13 and 18 goals, respectively, in his first two seasons. He would turn that around by leading the NHL in goals with 39 in just his third season before going on to lead the league in goals seven other times during his career. Nicknamed “The Golden Jet”, Hull would be named an all-star 13 times, while also leading the league in points three times. Hull was a performer in the playoffs as well, scoring the most goals during the postseason on three occasions.

Who is the best hockey player of all time?

Wayne Gretzky is widely considered to be the best hockey player to ever live. “The Great One'' recorded nearly 1,000 more points than any other player in NHL history, separating himself from the crowd by an entire career’s worth of points. Gretzky took the fewest games in NHL history to record 1,000 points, but in Gretzky fashion, he managed to make the feat more impressive by recording his second 1,000 points, from 1,000 to 2,000, in fewer games than anybody but himself. He would win eight straight NHL MVPs beginning at age 19.

Who has won the most Stanley Cups in hockey?

Henri Richard has won the most Stanley Cups in NHL history with 11, followed closely by teammates Jean Beliveau and Yvan Cournoyer with 10. Both were members of the Montreal Canadiens during the 1950s, 1960s, and 1970s. At one point, they won five consecutive Stanley Cups, beginning in 1956 and ending in 1960. This era of the Montreal Canadiens dynasty produced many of the players with the highest Stanley Cup totals, as seven of the eight players in NHL history with at least eight Stanley Cups won all of their cups during this time period with the Canadiens.

Pages Related to Top 10 Best Hockey Players of All Time