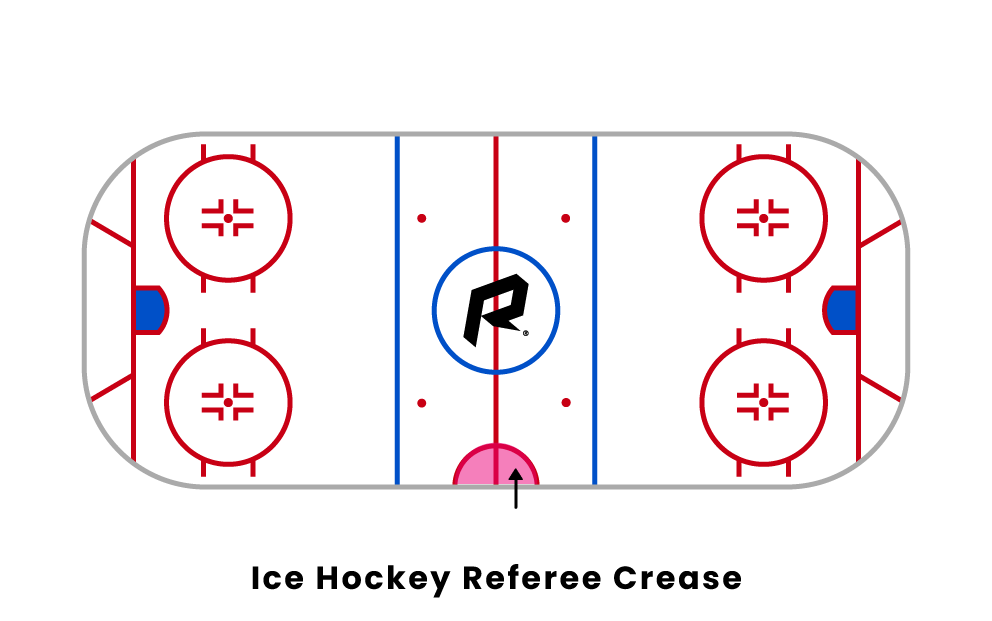 The referee crease is a designated area on a hockey rink that is specifically designed for referees to enter in order to properly review and analyze previous plays.

This crease differs from the goalie creases found on either side of the rink. The referee's crease is a 10 foot semicircle found on the opposite side of the team benches. There is only one referee crease. It is between the two different penalty boxes as one penalty box is designated for each team. The penalty box is where a player serves their time for a foul committed on the ice.

Additionally, the referee crease can be found right in front of the scorekeeper area. This location is intentional as it allows the referees to analyze plays with the scorekeepers nearby. The referees will enter this crease only when time is stopped and play has halted on the ice. The crease allows for the referees to view the previous play safely in a more secluded area.

The referee crease is for officials only. Players on the ice are not permitted in the crease unless they have been given access by an official to enter the area. A misconduct penalty may be given to any player that enters or remains in the referee's crease without permission from the officials. A penalty for this infraction is typically rare. If an athlete comes too close to the crease, they will usually be given a warning before being called for a misconduct penalty. When officials enter into the referee crease, they are reviewing a previous play to reassure the right and appropriate call is made on the ice. Therefore, some players may be emotional or passionate about the play and try to talk to the referees. They must be respectful and keep out of the crease!

How is the goalie crease different from the referee crease?

There are two goalie creases on the rink! These creases are small, circular areas made around each net. They are designed to protect the goalie and prohibit players from making unnecessary contact with the goalie. The puck needs to enter the crease before the attacking player is allowed to enter the area. No body part, stick or skate can enter the crease first. Similar to the referee crease, these areas are needed for safety purposes.

What can result in a misconduct penalty?

What is a game misconduct penalty?

Are players allowed to argue with the referee?

Similar to many other professional sports, the players are allowed to discuss previous plays with the game referees. However, they must always be respectful and show great sportsmanship! In the games, players tend to get emotional and intense about certain plays that may alter the final outcome. They may not touch the referee with their hands or stick, and may not interfere in any non-physical manner with game officials who are performing their designated duties.