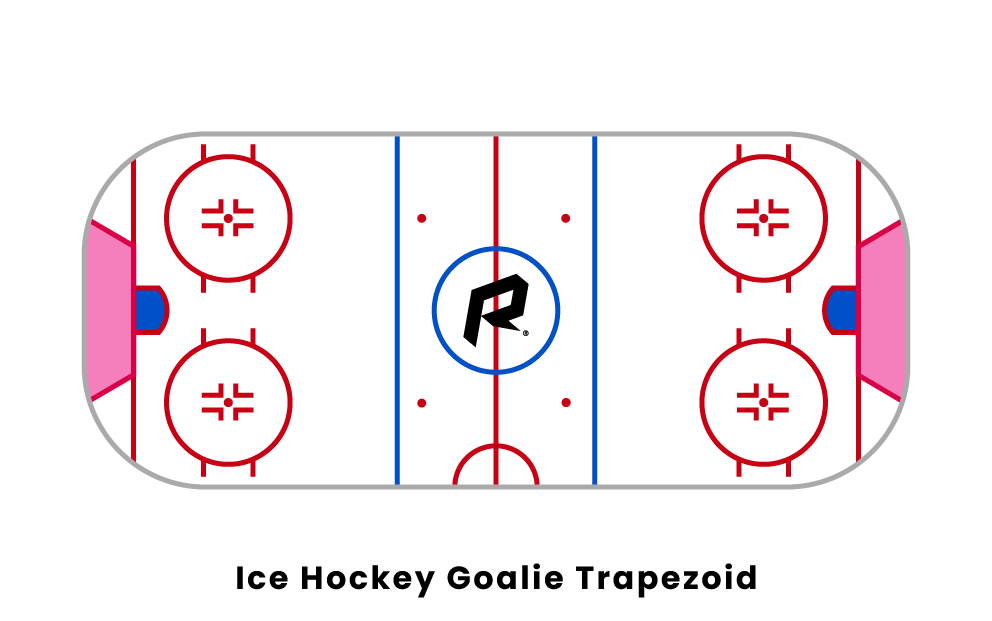 The trapezoid in hockey is the area behind each goal on the rink. In the trapezoid, the goaltender is allowed to play the puck on their stick and move around freely below the goal line.

Since the NHL’s rule change in 2004, goalies are not allowed to touch the puck in the corners below the goal line. This rule was introduced to specifically curb the goaltender’s movement behind the net. However, the trapezoid still gives goalies a smaller area directly behind the net to handle the puck but restricts the options that the goalie can use to advance the puck up the ice.

The goalie trapezoid in the NHL is used to curb goalies from playing the puck in the corners of their defensive zone. According to the NHL rulebook, a goalie is not allowed to play a puck behind their goal line unless they are within the trapezoid. If a goalie touches the puck behind the goal line outside of the trapezoid, they will be assessed a minor delay of game penalty. A player from the offending goalie’s team will serve the two-minute penalty in the penalty box.

In the 1990s, the popularity of defensive trap formations greatly decreased goal scoring in the NHL. This change was an issue as many casual fans watch hockey to see exciting goals and games. The trap decreased scoring by making games more of a stalemate, as teams began waiting for their opponent to make a mistake rather than actively trying to create offensive chances by themselves. To combat low-scoring and slow hockey, the NHL created the trapezoid in 2004.

Legendary New Jersey Devils goaltender Martin Brodeur is often credited with forcing the NHL to implement the trapezoid. Throughout the neutral zone trap era, many goalies became proficient at playing the puck outside the crease, but none learned this skill better than Brodeur. Using his mobility and stick skills, Brodeur won two Stanley Cups and cemented his place as one of the most iconic goalies of the 1990s and 2000s. The Devils’ goalie was able to control the pace and strategy of the game behind the net, and as a goalie, his goal was to not let the other team put the puck on the net. This strategy worked, and other teams noticed, decreasing scoring by at least 30% throughout the 1990s until the trapezoid was introduced.

How large is the trapezoid in hockey?

The trapezoid spans 28 feet wide at the boards and 11 feet deep behind the net in a hockey rink. The trapezoid limited the area goalies can play behind the net as this area is only a fraction of the rink-long space along the boards under the goal line. Goalies do have some leeway with this rule, though, as they are allowed to play the puck slightly outside the trapezoid if they have at least one skate in the trapezoid while controlling the puck.

Do goalies serve the penalty minutes for their penalties?

What happens if a goalie plays the puck outside the trapezoid?

If a goalie plays the puck behind the net and outside of the trapezoid, the referee signals for a delay of game penalty. This penalty is only a minor penalty, and the other team has a one-man advantage for two minutes. The goalie himself does not serve this penalty, so another player on the offending team goes into the penalty box. There are other ways to get called for delay of game, but this one specifically involves the goalie moving outside the trapezoid behind the net.

Can goalies play the puck above the goal line?