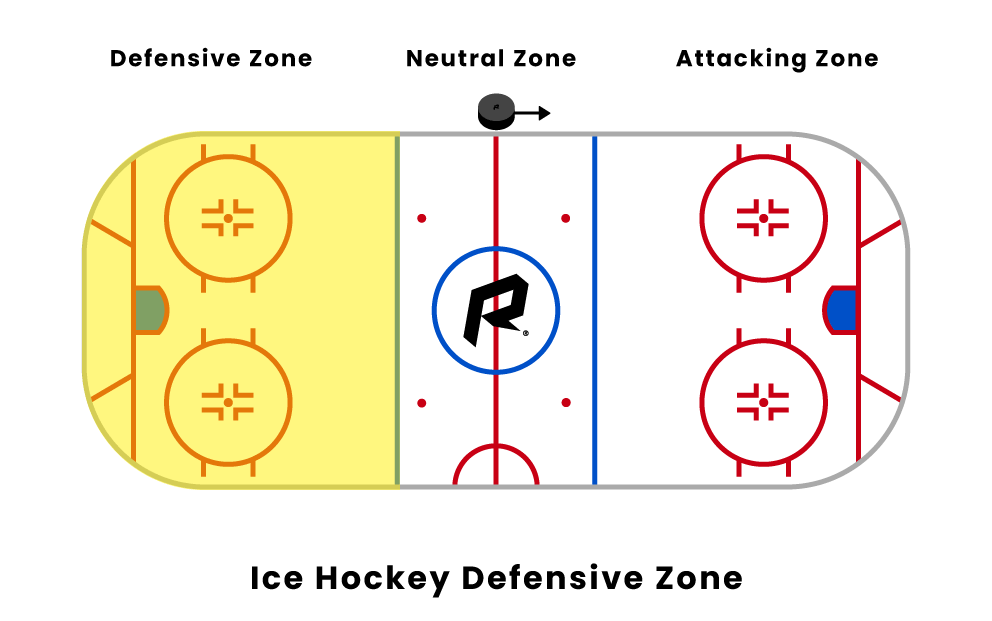 The Box+1 formation is a zone strategy where each defensive player is responsible for defending a certain section of the ice. This formation is called the Box+1 because the defenders and forwards form a box shape, while the center is an added defender who fills the gaps in the defense. The two defenders are placed in the corners on either side of the goalie, while the forwards are placed at the point several meters in front. If an offensive player stands in front of the net to distract the goalie, the center will guard that player allowing the goalie to have better vision of the ice.

This defensive scheme is designed to limit the amount of shots on goal. As the offensive approaches the goal, the defense will shrink together, creating limited opportunities for the offense to shoot or pass. The box formation is also used when teams are down a player on penalty kills to try and cause shot deflections.

A strong-side overload defense is when all five players on the defending team try to contain the offense to one side. The goal is to split the ice in half and contain the offense in a smaller area, making it easier to defend. This strategy limits the amount of space the offense has to maneuver. The strong-side overload scheme is commonly used when the opposing team has a player with a powerful and accurate shot from the top of the ice. Whichever side the strong offensive player is on, the defense will respond by placing more defenders on that side of the ice.

What is the importance of the defensive zone in hockey?

How do you teach defensive zone coverage in hockey?

The best way to teach defensive zone coverage in hockey is to study visuals before attempting to implement the defensive strategy on ice. Pictures help to explain where a player needs to be located in certain situations. Videos are a good way to show how players need to move within the defensive structure. After studying visual examples, then a coach should have their players practice the defense scheme on the ice.

What is the best defensive strategy in hockey?

There is not a clear answer to this question. Defensive strategies are designed to stop the offense from scoring, and are dependent on the opposing team's skill sets. Overall, the most common defensive strategy is the box+1 formation. Most teams use this strategy because the box+1 limits the amount of space the offensive team has to maneuver around the goal. The box+1 minimizes passing lanes and scoring opportunities.

What is the center's role in hockey?

In zone coverage defensive schemes, the center position has the most pivotal role on the team. The center controls the middle of the ice and has to respond quickly to whichever way the puck moves. The center acts as a support for the defenders by protecting the front of the net. When opposing players approach the goal, it is the center's job to limit their movement or steal the puck from them.