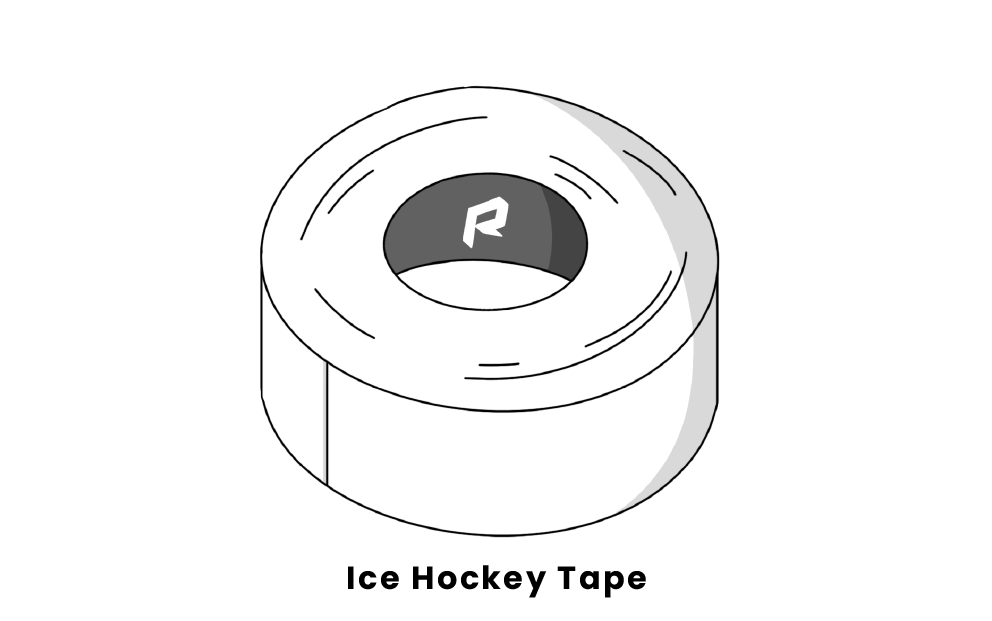 When you think of tape, you probably think of Scotch, packing, or duct tape. However, when you ask a hockey player for tape, they typically have a very different image in mind: hockey tape. So let’s break down what exactly hockey tape is, the different types, and what you should keep in mind when purchasing.

What is ice hockey tape used for?

Ice hockey players use tape to hold gear in place, protect their sticks, and even express a sense of style. Shin tape is typically used to help hold shin pads or socks in place, while the primary use of hockey tape is on the stick at the top of the shaft and on the blade. At the top of the shaft players can use regular stick tape or a more specialized version called grip tape. The blade is only taped using regular stick tape, and this is added to both protect the blade and give the player more control over the puck. Regular stick tape is typically made of cloth.

Both the shaft and blade can be taped in different styles allowing players to express themselves. Some players in the history of the NHL have even taped their stick in ways so unique that it becomes their own signature tape job. NHL legend Bobby Orr became well-known for his two-strip tape job on the blade, which occupies far less space on the blade than most tape jobs.

When looking for ice hockey tape, you'll want to consider the following:

There are a number of different uses for hockey tape, so there are several different types of tape to best suit the situation at hand. Let’s take a look at the types of tape, why they’re different, and the uses for each of them. 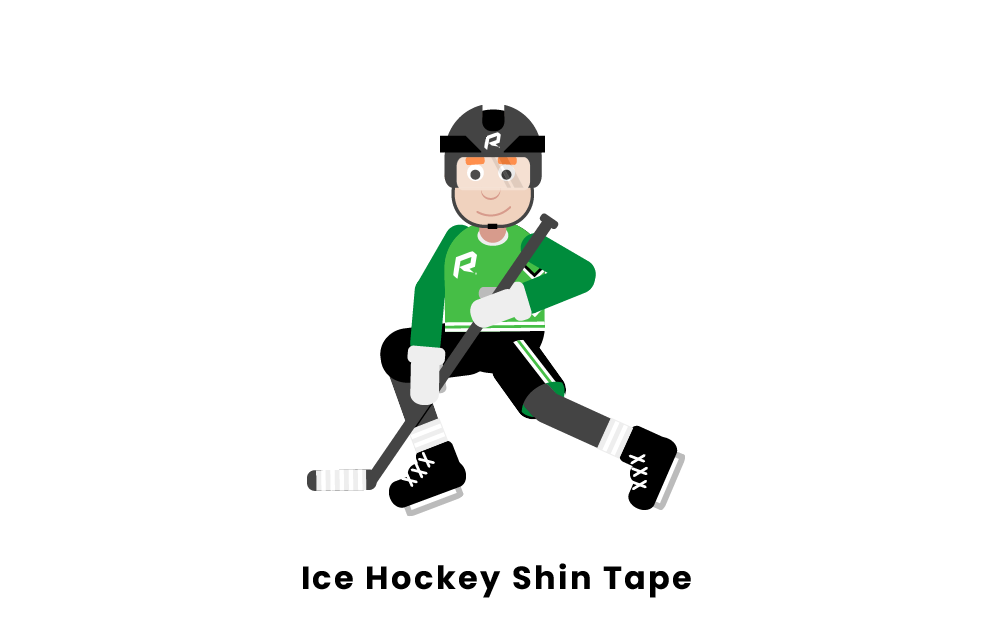 Shin tape is typically used to hold the shin pads in place, preventing them from sliding up and down the leg or even spinning. It can also hold the socks in place. Shin tape is typically a clear, plastic-like material that is waterproof on top, so the integrity of the tape isn’t compromised mid-game. It is used on a piece of equipment that must be removed, so shin tape only lasts for one skating session. 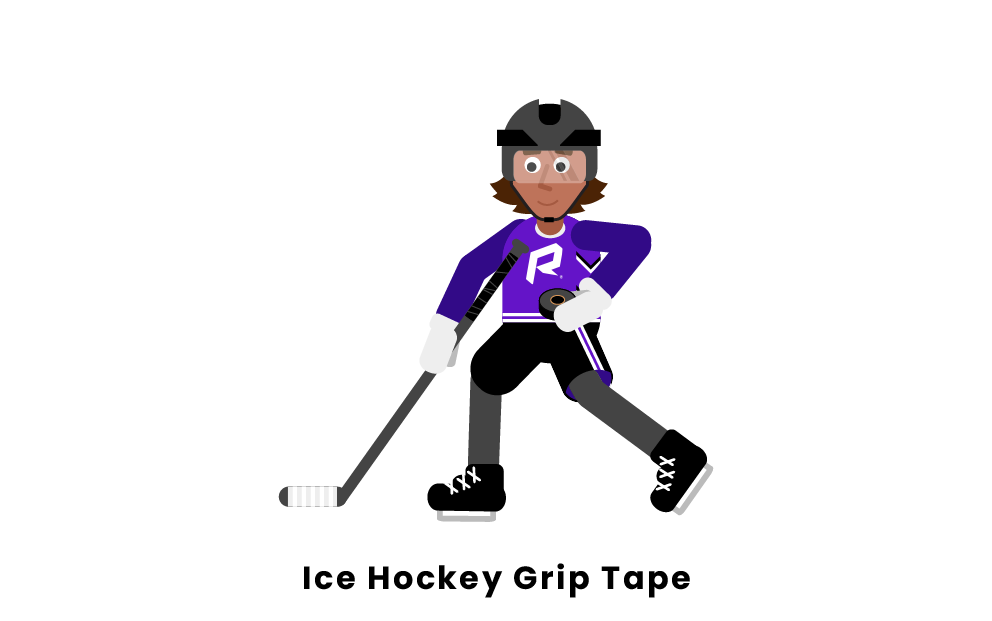 Grip tape, as the name might suggest, helps players get a better grip on the stick’s handle. It is a cloth material typically elasticized and coated with an adhesive to make it stick to itself and the stick, but not you. Grip tape has a spongy and a slight adhesive feel to it. 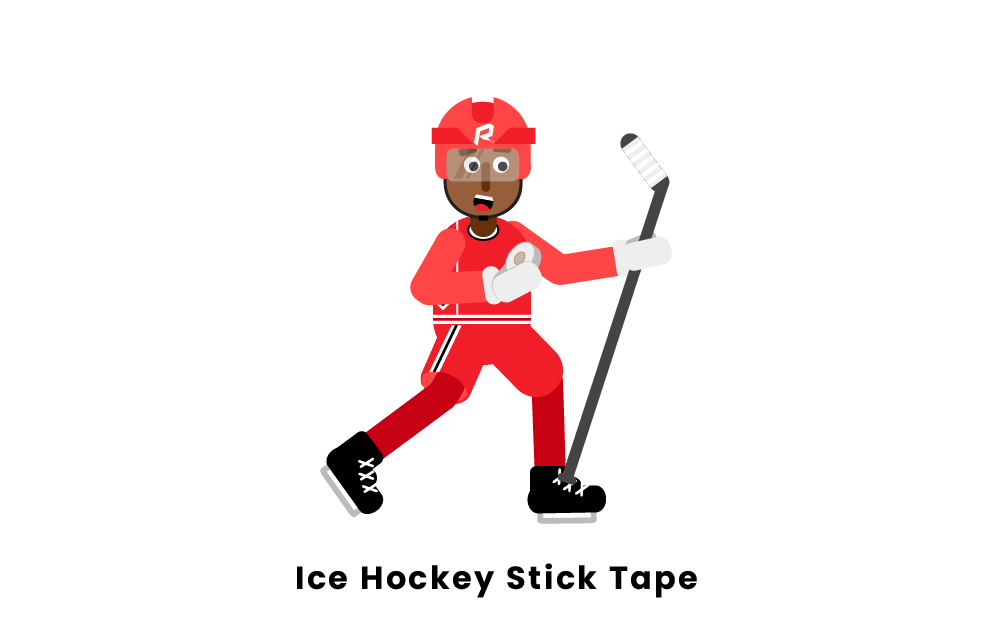 Stick tape is cloth tape that can be used on the handle, but it is most often used on the blade. It comes in a variety of colors, but the two most common are black and white. Stick tape gets wet from the ice and it is not waterproof, so the friction of the puck eventually creates rips. It can be fixed by ripping off the remaining tape and applying a brand new layer of tape.

There are different types of tape that each have their own purposes and properties, so let’s look at the materials that make them so unique.

Let’s take a look at three of the most commonly used brands in hockey: Howies, Renfrew, and SportsTape.

There are a number of things that you must consider when buying hockey tape. It is important to consider how long you want your tape to last, the price you are willing to pay, and what width of tape you desire.

The largest factors in stick tape durability are the frequency that you use the stick, your preference for the condition of your tape job, and the thickness of the tape job. Some players are okay with a more deteriorated tape job, so they can play 10+ times without re-taping their stick, while NHL players occasionally re-tape their sticks mid-game. Grip tape or stick tape on the handle can last for much longer before it starts to deteriorate. Shin tape is almost exclusively single-use.

The biggest factors in the cost of hockey tape are the brand and quantity purchased. Some brands are going to charge more as their tape has special features designed to increase control or durability, but for the most part hockey tape is sold in the $3-$5 range per roll. Buying hockey tape in bulk allows for the price per roll to decrease, which might prove beneficial if you’re committed to playing for an extended period of time.

Hockey tape is designed to be used by all ages and for gear of all sizes. You can use the same tape on a youth and senior stick. There are different widths, which allow players to determine the depth of their tape job. Thin tape requires more overlaps and more tape, but it is likely to last longer. Some players prefer to use thick width tape as they can spread it out, but it gives them a better feel for the puck.

How long does hockey tape last?

Every type of hockey tape will have a different lifespan depending on how it is used and how often you play hockey with it. Shin tape only lasts the use of a single skating session because it is only used to hold gear in place that will have to be removed. However, grip tape and stick tape can last varying amounts of time depending on the frequency in which you use your stick and your preferences. Handle tape jobs take less wear and tear than the blade, so they don’t need to be re-done often. Some players prefer to tape their blade every time before they skate, while others skate 10+ times before they re-tape it.

How much does ice hockey tape cost?

Ice hockey tape typically costs in the $3-$5 range per roll, but buying in large quantities can actually lower the unit price below that. Even some of the premier brands sell bundles of 30 rolls or so that average out to less than $3 per roll. There isn’t a large gap in quality for most brands, so there isn’t going to be a huge difference in price per roll either. However, the small difference can add up over time.

What are the different kinds of ice hockey tape?

There are three different kinds of hockey tape: shin, grip, and stick tape. They each have a very specialized use. Shin tape is used to hold gear in place, most often shin pads. It is often clear, waterproof on top, and single use. Grip tape is an elastic, adhesive cloth tape that is put on the top of the shaft to give players a better grip on the stick. Stick tape is a cloth tape that can be used anywhere on the stick, but is most often used on the blade to give players better control over the puck.