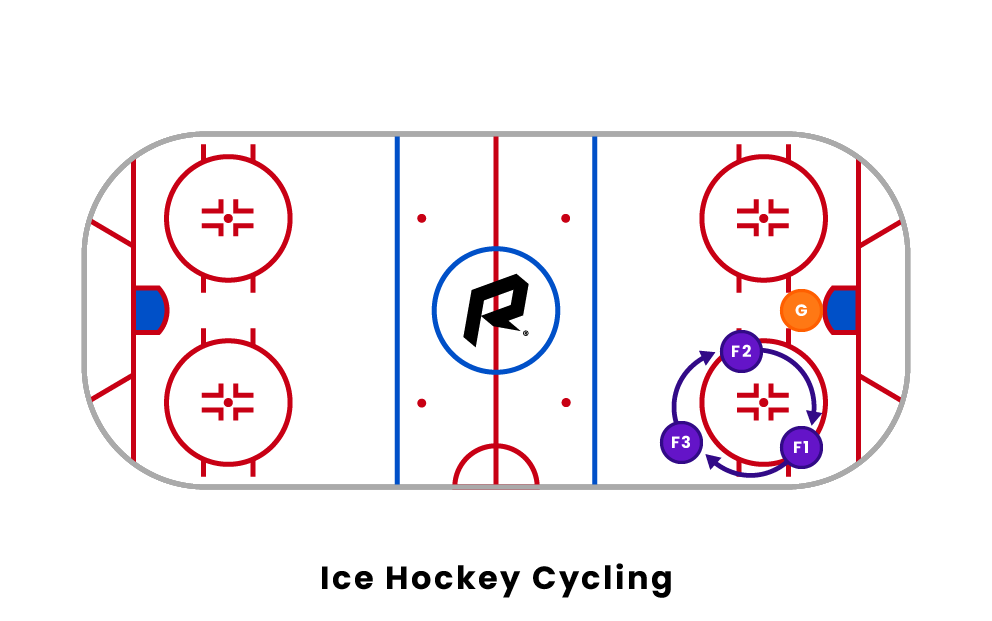 Cycling is when three or more offensive players move in a circular motion to control the puck in the offensive zone.

This offensive strategy is designed to tire out the defense and create scoring opportunities. In most hockey offenses, the forwards do most of the movement and attacking. The defensemen remain at the top of the offensive zone, otherwise known as the point. Most cycles in hockey will feature the three forwards passing the puck between each other while the defensemen act as safety valves.

Cycles occur on the low boards near the end of the offensive zone, and the positions are rather simple. Cycling requires the forwards to have adequate spacing to create gaps in the defense. The three forwards - F1, F2, and F3 - must communicate when they plan to move.

F1 will have control of the puck in the corner of the boards below the face-off circle. F2 is stationed atop the face-off circle and is attempting to find open space for a pass and shot. F3 is standing just outside the crease on the near post. When the cycle moves, each player either rotates clockwise or counterclockwise, depending on which side of the ice the offense is located. As F1 moves up to fill F2’s position, F1 will try to look for a shot or pass to the cutting F2. Most of the time, the defenders will have this option covered, resulting in F1 dumping the puck behind them off the boards to the rotating F3.

A cycle can run for as long as the offensive team has possession of the puck. When the defense gets tired, the offense has to be ready to take advantage of any mishaps. If the defense guards the cycle well, the forwards can always pass the puck out to a defenseman and reset.

What is a cycle in hockey?

Cycling in hockey is when offensive players move in a circular motion to tire out the defense and create scoring opportunities. Cycling usually involves three or more players. Most of the time, the defensemen stay stationed at the point and don’t participate in the cycle movement. The forwards will continually interchange positions while passing the puck along the boards. The repetitive movement may seem easy for a defense to guard, but it tires out defenders quickly.

What is a forward’s role in the cycle?

The forwards play the most important role in a cycle. They have to continually move in a synchronized manner to ensure adequate spacing. The forwards must understand when it is the right time to pass the puck. Defenders may try to trap the puck carrier along the boards and ruin the cycle. In addition, forwards must also cut hard while cycling to create scoring opportunities. Lazy movement from the forwards will make it easier for a defense to guard against a cycle.

What is a defenseman’s role in the cycle?

Defensemen may not participate in the cycling movement, but they still play a vital role in the offense as a whole. If the defense breaks down the cycle, the defensemen will become a passing outlet for the struggling forward. The defensemen will then control the puck, and the cycle can reset. Moreover, when a forward with the puck is looking to pass, a defenseman must be ready to look for a slap shot opportunity from the point.

What are good drills to teach cycling?

A great drill to teach younger players the concept of cycling is the “figure-eight” drill. The drill requires three or more players to skate in a continuous figure-eight motion around both face-off circles in the offensive zone. Once a player reaches the boards, a coach should pass a puck to the player to simulate a game-like scenario. Then the player must control the puck up the boards, pass, and proceed to cut hard to the other side of the ice.