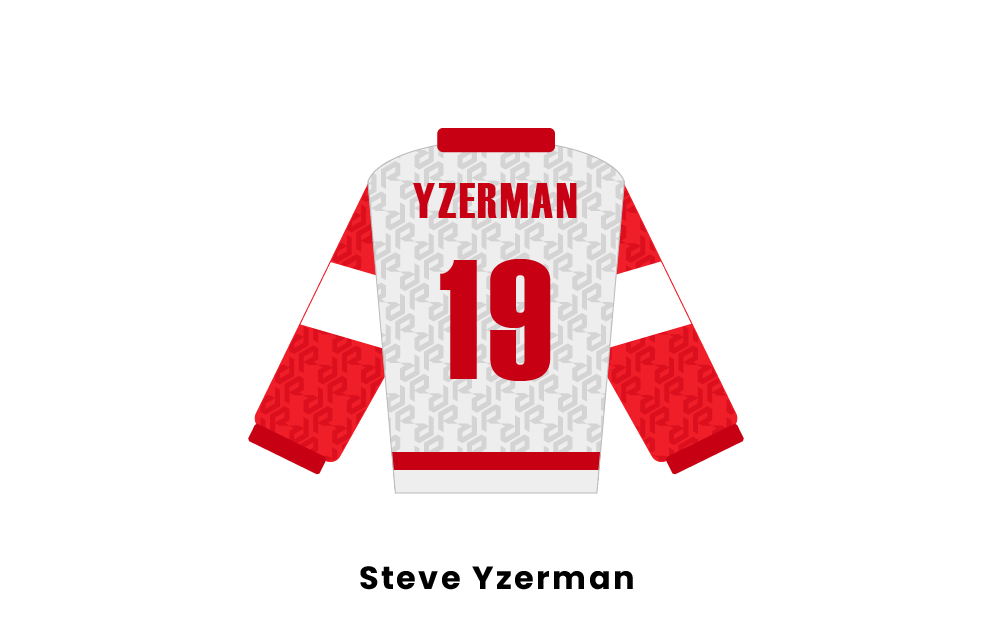 Steve Yzerman is a former NHL hockey player and current NHL executive and general manager. During his long and illustrious playing career, spanning from 1983 to 2006, he amassed over 1500 games played, 692 goals, and 1063 assists, as well as winning three Stanley Cups. Considered to be one of the great leaders in NHL history, he was the captain of the Detroit Red Wings from 1986 until his retirement in 2006.

Following the end of his playing career, Yzerman immediately entered the ranks of NHL front-office staff, sticking with the Detroit Red Wings for four years as VP of Hockey Operations. Yzerman picked up another Stanley Cup ring during this time, as the Wings won the championship in 2008. After the 2009-2010 season, Yzerman was hired by the Tampa Bay Lightning to be their General Manager. He remained in that role until the conclusion of the 2018-2019 season, when he returned to his beloved Red Wings as General Manager.

Steve Yzerman’s net worth is believed to be $50 million. His money comes mostly from his NHL career, where he played on a number of lucrative contracts. After playing in the NHL, he was the GM of the Tampa Bay Lightning and Detroit Red Wings, which was another source of income for “Stevie Y.”

Yzerman was drafted by the Red Wings with the fourth overall pick in the 1983 NHL Draft after two years of major junior hockey with Peterborough of the OHL. He made a major impact in his rookie season, picking up 87 points in 80 games, and he became the youngest player ever to play in an NHL All-Star Game. Over the next few seasons, he continued to produce offensively at an incredible rate, earning him a reputation as one of the League’s top offensive players. After being named Captain of the Red Wings in 1986, Yzerman continued to rank among the top point-getters in the NHL, reaching his career high in the 1988-89 season when he amassed 155 points. However, the Red Wings were unable to advance to the Stanley Cup Finals during these years. As a result, it was decided to hire legendary coach Scotty Bowman to lead the team beginning in the 1993-1994 season.

This coaching change was a major turning point for Yzerman, as he began to reduce his offensive output in favor of increased defensive responsibility. He became known as one of the best two-way players in the league, and the Red Wings finally won the Stanley Cup in 1997, and again in 1998. Yzerman’s success continued through the 21st Century, winning another Cup in 2002. He retired after the 2005-2006 season, having played the 11th-most games of any NHL player (all for the Red Wings). He also won an Olympic Gold medal in 1998 for Team Canada.

After retiring from playing, Yzerman immediately joined the Red Wings front office, where he remained for four seasons. The Red Wings won another championship during this time, in 2008. In 2010, he was hired to be the General Manager of the Tampa Bay Lightning. Additionally, he was the GM of the Canadian Olympic team in 2010 and 2014, winning gold both times. He remained with Tampa Bay for several years, and his team reached the Stanley Cup Finals in 2015, losing to the Chicago Blackhawks. During his Tampa Bay tenure, Yzerman became widely known as one of the NHL’s top GMs, making numerous important trades and draft choices which turned out to be excellent decisions. Following the 2018-19 season, Yzerman decided to return to Detroit to take over the role of Red Wings GM. He has remained in Detroit since then, continuing to rebuild the Wings for future Stanley Cup contention.

Yzerman won numerous individual and team awards during his career. Most importantly, his Red Wings teams won Stanley Cups in 1997, 1998, and 2002. During the 2002 Playoffs, Yzerman won the Conn Smythe Trophy as playoff MVP. He also appeared in 10 All-Star Games throughout his career. He received the Pearson Award for Best Player (as voted by NHL players) in 1989, the Selke Award for Best Defensive Forward in 2000, and the Masterton Trophy for dedication to hockey in 2003.

Yzerman was also well-decorated in international play, winning a gold medal in the Olympics with Team Canada in 2002. He also played in several World Championships and other international tournaments for Team Canada.

Steve Yzerman grew up in Nepean, Ontario, though he was born in Cranbrook, British Columbia. He settled in Bloomfield Hills, Michigan, after his many years of involvement with the Detroit Red Wings. He and his wife have three daughters, who remained in Michigan when Steve moved to Florida to become the GM of the Tampa Bay Lightning. In his free time, he enjoys playing golf, traveling, and attending his daughters’ sporting events.

Is Steve Yzerman the best Captain ever?

While it is still debatable, Steve Yzerman is considered by many to be one of the best captains in NHL history. The NHL rated him as #2 all-time after Mark Messier, and Sports Illustrated has him #3 after Messier and Jean Beliveau. In any case, Yzerman’s leadership and skill during his playing days made him one of the NHL’s legendary captains.

How many Stanley Cups did Steve Yzerman win?

As a player, “Stevie Y” won three Stanley Cups, all with the Detroit Red Wings. In 1997, the Wings swept the Philadelphia Flyers in the finals. In 1998, the Wings repeated as Cup Champions by sweeping the Washington Capitals in four games. In 2002, Yzerman got his third Cup, in a five-game series against the Carolina Hurricanes.

How do you pronounce Steve Yzerman’s name?

Steve Yzerman’s last name was often mispronounced early on in his career, before he became well known around the league. The correct pronunciation is “EYE-zer-man.” A prominent mispronunciation occurred when the Red Wings visited the White House after their 1998 Cup victory. When giving a welcome speech, President Bill Clinton butchered Yzerman's name, and the video clip has become well-known among hockey historians.