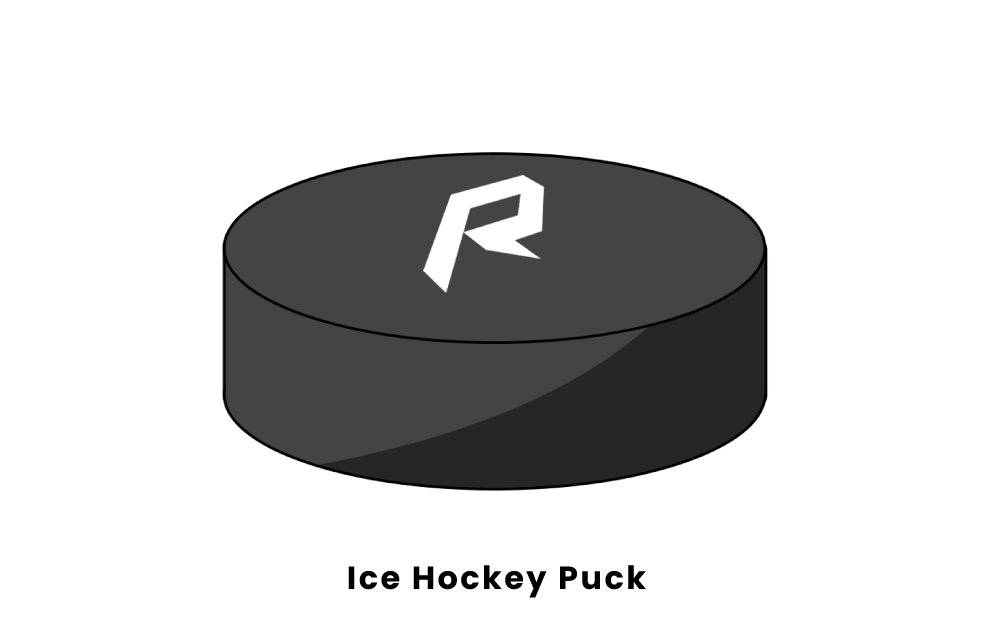 Pucks are a must-have item for anyone who plays hockey. A hockey puck is a disk shaped object that players pass around the ice, as they attempt to score goals by putting the puck in the opposing team’s net. Pucks are small but dense, making them easy for players to control, pass, and shoot as they play and practice.

What are ice hockey pucks used for?

Pucks are one of, if not the, most important pieces of equipment in the sport of hockey. Pucks are the ice hockey equivalent of a ball in many other sports, so games can not be played without one. Every ice hockey team uses pucks on a daily basis during practice, warmups, and games. Ice hockey pucks are small, but dense.

Ice hockey pucks are black in order to make the puck easy to see for both players and referees on the ice during games and practices. The goal of every ice hockey team is to control the puck on offense in an attempt to score it in the net, while also preventing the other team from putting the puck in their own net while they are on defense.

When looking for ice hockey pucks, you'll want to consider the following:

While the standard hockey puck that most people are familiar with is black, there are many different kinds of pucks used throughout all levels of ice hockey. Each different kind of puck is made a different color, and each has specific uses.

Some important considerations when buying hockey pucks are durability, weight, and cost.

During an NHL game, the puck being used is switched out every two to three minutes of gametime on average. This is because as the puck spends time on the ice, it gets warmer, thus making it easier for it to become chipped due to the high speeds and force it moves with. This time will of course be longer in lower levels of hockey, but it is important to make sure pucks are not chipped while playing in a game.

Hockey pucks are typically bought in bulk because you always want to make sure the puck you are using is in top condition. Standard black pucks can be bought for anywhere from $1-$1.50 each. Training pucks and youth pucks may cost a bit more, but are worth the purchase for players looking to improve their game. Hockey pucks are relatively inexpensive because of how many are used on average during games and seasons.

A standard hockey puck will weigh between 5.5 and 6 ounces. While this may seem light, pucks are very dense and move with lots of force. Youth pucks will weigh around 4 ounces, while some training pucks will weigh up to 10 ounces. Heavier pucks are great for practice because they make standard pucks seem lighter, making in-game shots fly faster and harder, while youth pucks are lighter for smaller players to use.

What are the best hockey pucks?

Inglasco makes some of the best hockey pucks. Inglasco Hockey Pucks are high-quality pucks perfect for competitive and recreational play. These strong, durable hockey pucks are made out of material that makes it difficult for them to chip or become damaged. They are commonly used to practice with because of their durable material, making them perfect for those just learning how to play.

The Canada-based company has been around for more than 40 years and has become well-known for its high-quality designs. Inglasco Hockey Pucks have been used by many professional hockey organizations, including the NHL, AHL, ECHL, Hockey Canada, and USA Hockey. 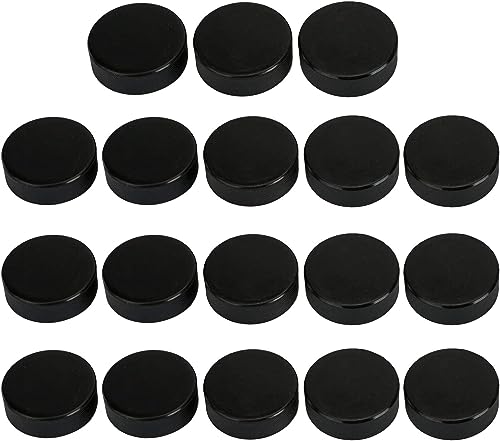 Faswin Ice Hockey Pucks are among the best hockey pucks to use for all kinds of play. With NHL official size, they are perfect for the highest levels of play. They are considered the “ideal” hockey puck for play and practice. In addition to the hockey pucks, they also come with three reusable mesh bags to hold the pucks.

These hockey pucks are smooth and finished on the top and bottom but have a textured side which creates friction when they are in use. This friction allows for easier control and players to make accurate shots and passes. Another reason these are one of the best is due to the high durability and longevity that they offer, which makes them perfect for anyone who likes to play often. Their high-quality surface makes Faswin Hockey Pucks one of the best to use for those who are playing for fun or competitively. 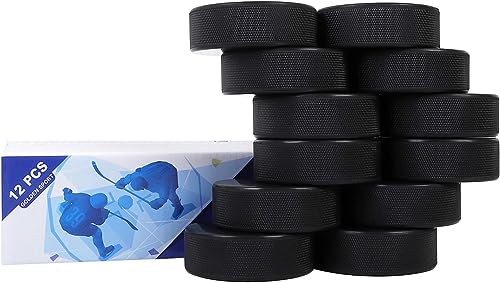 The Golden Sport Ice Hockey Pucks are a great choice for practice, games, or recreational play. These high-quality pucks are suitable for all ages, levels, and types of play. Thanks to the high hardness, dense texture, and resilience, this hockey puck is perfect for even the highest level of play.

These pucks are made of high-quality vulcanized rubber, with both of the sides being smooth and flat, so the puck can glide easily along the ice. They are perfect for making accurate shots due to their resilience and durability. These NHL official size hockey pucks have a dimple pattern surrounding the sides, creating friction between the puck and stick, allowing for greater control when stickhandling. 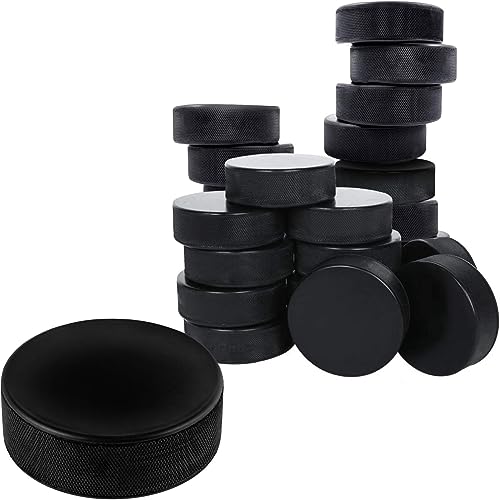 Thorza Ice Hockey Pucks are perfect for any and all kinds of play. They are designed for shooting, passing, goaltending, and skill practicing. With the high hardness, rubber texture, and smooth surface, they make the perfect puck for anyone, especially those looking to improve their play and skills. Thanks to their longevity, they are perfect for any setting, including ice and concrete play.

Something that makes these pucks great is the 30-day-no-risk money-back guarantee available. If you aren’t satisfied with the pucks, you can return them and get a refund on your purchase. Compared to many other hockey pucks, these are made to last. Thanks to the pucks being made out of vulcanized rubber, these hockey pucks have a much easier time resisting damage and being used for a long period. 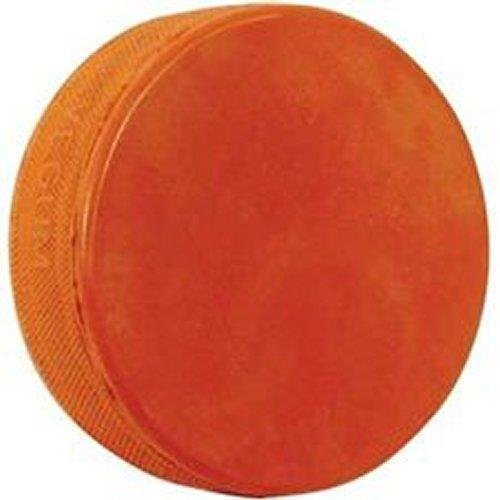 The Sher-Wood Weighted Ice Hockey Practice Puck is perfect for anyone looking to strengthen their hockey skills. This high-quality puck is great for learning puck control and increasing shot power. In addition, this puck helps players in being able to develop lean muscle and muscle memory. This is the perfect hockey puck for any highly-competitive player wanting to get ahead of their competition.

This puck has the same dimensions as a regular hockey puck, except it weighs a total of 10 ounces compared to the normal hockey puck, which weighs between 5 ½ to 6 ounces. This means that those who use this hockey puck will be able to strengthen their shooting and passing skills due to the heaviness of the puck. 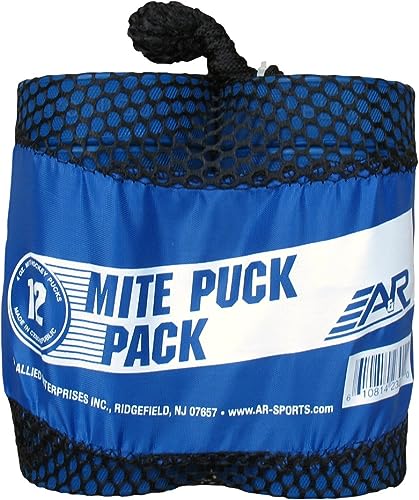 The Mite Puck Pack includes a total of 12 pucks and a mesh bag to store them. These hockey pucks are built with vulcanized rubber to ensure their longevity. A&R hockey pucks set strict standards to ensure their weight, rebound elasticity, flatness, surface quality, diameter, and thickness are the best quality. The hockey puck’s precisely flat surface allows it to glide along the ice easily and allows players to make smooth and accurate shots. 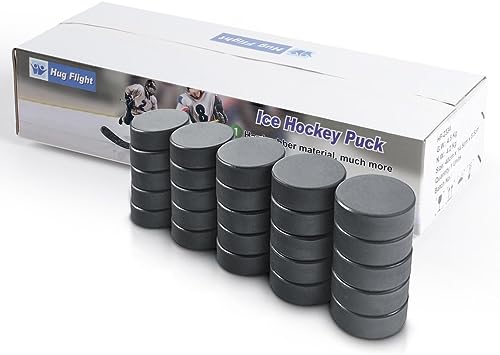 These are the perfect hockey pucks for anyone looking to purchase high-quality and reasonably priced pucks. Each hockey puck costs $1.88, which is much cheaper than other high-quality options. Hug Flight Hockey Pucks give players a competitive edge thanks to the high-quality and durable rubber material it is made out of. They will be able to last much longer than other options and have a harder time getting damaged. With the smooth surface of the pucks, they can easily slide across the ice. These are perfect for practicing, recreational play, or competitive play.

These hockey pucks have a unique dimple pattern surrounding the sides, creating friction between the puck and hockey stick. This allows players to have superior control, which can help with making accurate passes and shots. 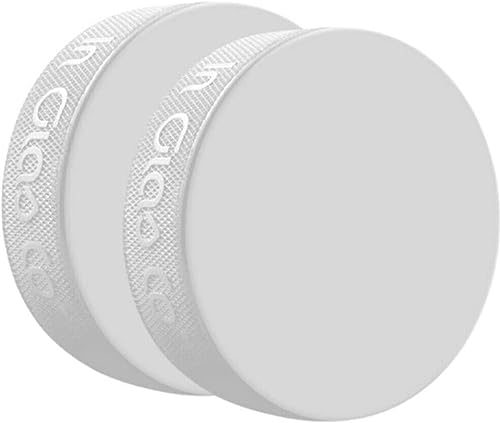 For any goalies looking to improve their skills, the Inglasco Goalie Trainer Ice Hockey Pucks are the ones to get. With Inglasco being an official puck supplier of the NHL, you know that they are one of the best hockey pucks available. What makes these pucks perfect for goalies is their low visibility on the ice. The white color of the puck blends in with the ice, making it harder for goalies to see when shot. They are used to train goalies to have quicker reaction times. They are three inches in diameter and weigh 6 ounces, perfect for any goalie looking to strengthen their hockey play. 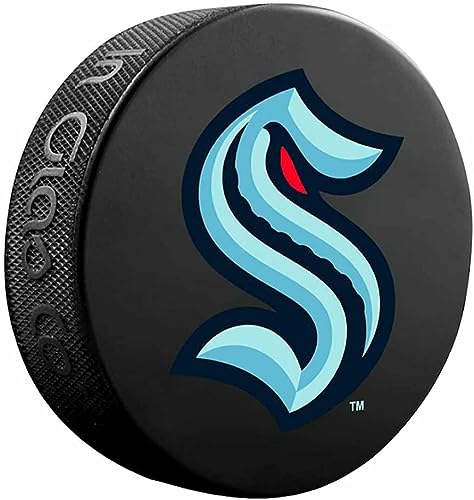 If you are an avid NHL fan looking for a gift or wanting to support your favorite team, this is the perfect hockey puck for you. Since you can choose from all 32 teams, these are perfect for anyone looking to add to their collection or to play with. The two-sided puck has your team logo on one side, and the official NHL licensed seal on the other to ensure its authenticity. On both sides of the puck, you will get a smooth finish, so it easily glides along the ice.

Not only does this hockey puck look good, but it also is high-quality. The pucks are printed using high-end ink and are made from highly durable material. You can be confident in this hockey puck’s longevity. PROGUARD SPORTS has been around for more than 40 years and has continuously been creating exceptional products. 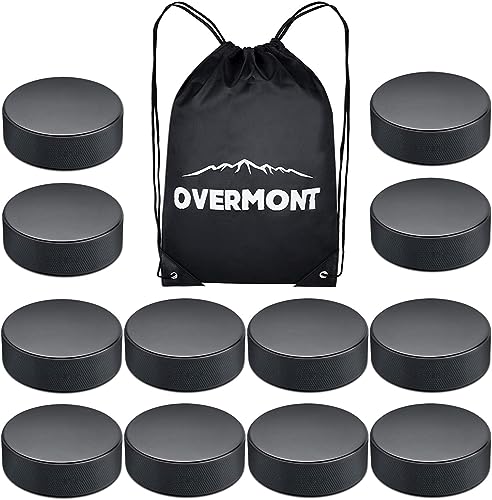 The Overmont ice hockey pucks are perfect for any level, type of play, and age. In addition to 12 NHL official size hockey pucks, it also comes with a drawstring bag to make it easy to store or travel with. The hockey pucks are made with a high-quality and durable material that will ensure that they can glide easily on any surface.

What sets these hockey pucks apart from others is the black vulcanized rubber that it is made of. It can resist heat and have a long lifetime, which makes it the perfect choice for anyone just learning how to play.

Why are hockey pucks frozen?

Pucks are frozen before every game in the NHL, and it is the responsibility of the home team to ensure that all pucks that enter the game are between 14 and 20 degrees Fahrenheit. Pucks are frozen to prevent them from bouncing on the ice. Pucks ideally slide across the ice when passed, so if they start to bounce officials will know they are too warm. Although the game is played on ice, pucks will warm up, so it is important for the home team and game officials to make sure the puck does not go above the allowed temperature.

Which brand of hockey puck is used by the NHL?

Every NHL game is played with pucks made by Inglasco. Pucks used in NHL games are standard sized black pucks that are one inch thick, 3 inches in diameter, and made of vulcanized rubber. Every NHL team uses these pucks for their practices and games. Game pucks will often feature logos such as the NHL logo, the logo of the home team, special event logos (Ex: Winter Classic logo), and Stanley Cup Playoff logos.

How heavy are standard hockey pucks?

Standard hockey pucks weigh between 5.5 and 6 ounces. This is heavy enough for players to easily pass, handle, and shoot the puck without having any problems, and light enough to glide through the air on a shot. Heavier pucks are sometimes used in training, while youth leagues may use lighter pucks. Standard hockey pucks are the most common and most recognizable in the sport.