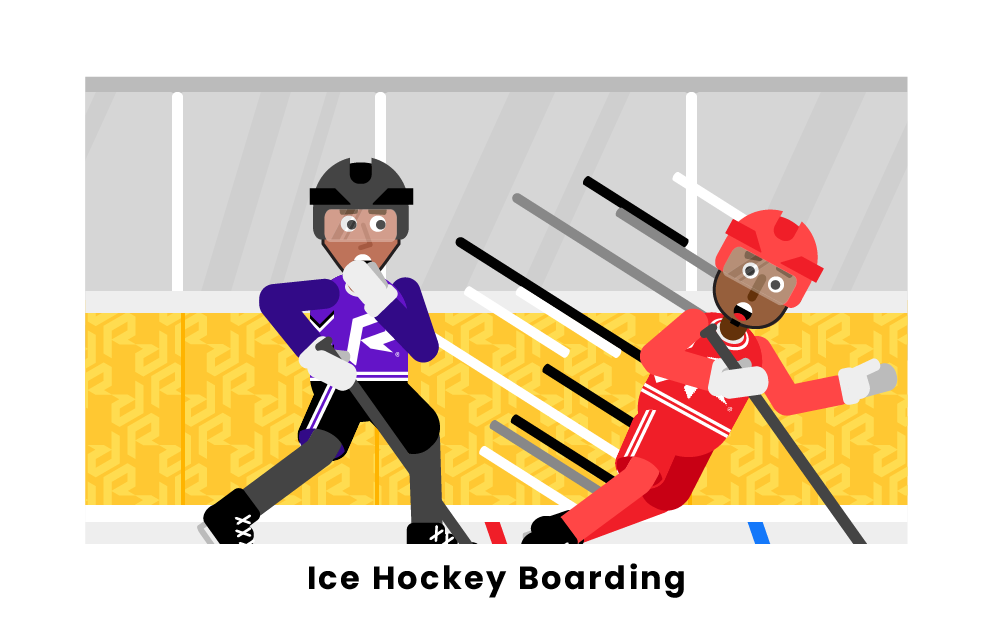 Hockey boarding is when a player intentionally pushes, trips, or body checks a defenseless and unaware opponent into the boards.

Boarding is an extremely dangerous act in the game of hockey. It is dangerous due to the vulnerability of the player receiving that contact into the boards. Standard body checking is legal in the game of hockey. However, boarding is illegal because the player receiving the check is usually unable to see it coming or prepare for the contact, making them extremely vulnerable. A boarding penalty will be immediately called if a player had no intention to play the puck. Players will typically board their opposition to intimidate or physically harm them.

After boarding occurs on the ice, the severity of the penalty is based on the discretion of the referee. The referee’s priority is player safety, and the act of boarding must have harsh consequences to limit the number of these illegal hits. If the hit wasn’t too hard, the referee might call a minor penalty of two minutes. If the boarding was a serious hit and had the potential to cause injury, the referee will either assess a major, game misconduct, or match penalty. The highest degree of penalty is a match penalty. The referee may call a match penalty if the boarding injures a player severely, which results in the athlete’s immediate removal from the game and a five-minute timed penalty, with possible further repercussions such as fines or a suspension.

To signal a boarding penalty, the referee will strike a closed fist into their open palm in front of their body. This signal is given in front of the scorer’s box so that off-ice officials know what penalty is being called.

When is a player considered defenseless?

What is the difference between charging and boarding in hockey?

Boarding is the act of deliberately and violenting pushing a defenseless player into the boards. However, charging is when a player will take three or more strides from a larger distance to deliberately harm a player with a body check. Charging can occur anywhere on the ice, while boarding happens when the hit is directed into the surrounding boards. There are major penalties as consequences of charging, similar to boarding. Charging and boarding are always very dangerous.

Referees have many signals for calls and penalties throughout the duration of a game. For boarding, a referee will use a punching motion in one hand and move towards the open palm of his other hand. The hands will make contact, and the open palm hand will be in a vertical position.

What is a clean hit in hockey?

Hockey is a contact sport, so there are certainly legal and clean ways to hit an opponent. Both players need to have their sticks on the ice and are allowed to lean into each other shoulder to shoulder. Players are allowed to body and hip check to try to separate their opponent from the puck. You must maintain your balance and body position to avoid getting called for a penalty.