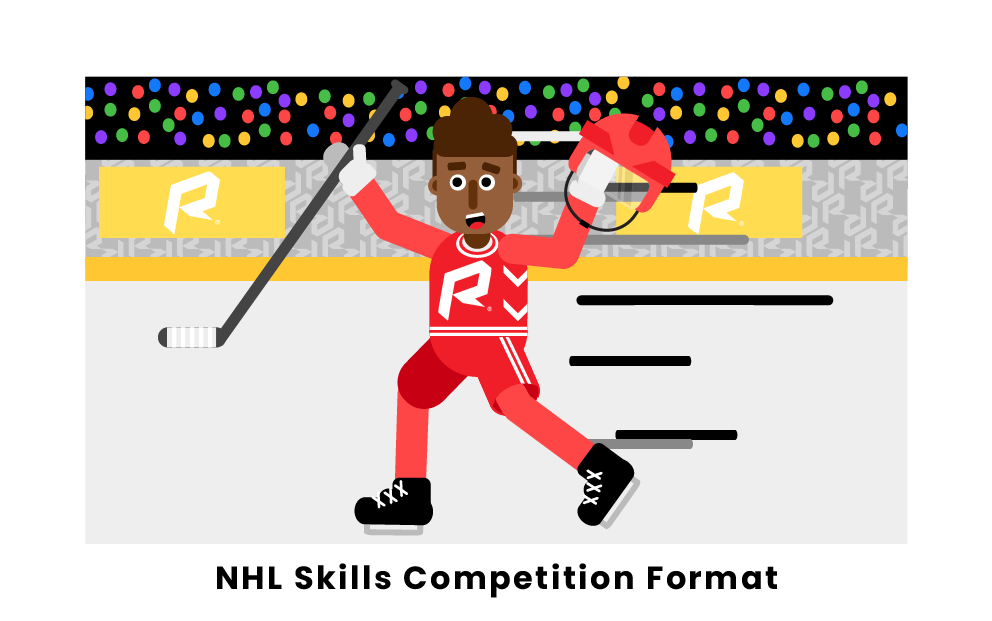 The NHL Skills Competition is a chance for NHL players to put their skills to the test and demonstrate why they are the best in the league through numerous challenges.

The Skills Competition takes place during NHL All-Star weekend each year, with the events changing from year to year. The individual winners of each event for the 2022 Skills Competition are each awarded a $30,000 prize. Certain events like accuracy shooting, fastest skater, and hardest shot have been long-standing parts of the competition, while others have only been done in certain years. In 2022, the competition included six different events.

The fastest skater competition is the most straightforward event. Eight players compete in this event to see who is the fastest. Each player is timed while skating around the rink one time. While each player only skates one lap, they can choose their starting point and the direction they wish to skate.

This event requires goalies to save as many shots in a row as possible in a shootout. There are four goalies and 36 skaters that participate in the competition. Each goalie attempts to save at least nine shots, and the shots increase depending on how long they can keep up the “save streak.” If the two top goalies achieve the same save streak, the goalie with the most total saves during his turn wins the challenge.

This challenge puts the player's accuracy to the test. Eight players attempt to shoot at targets on an LED screen 25 feet away on the goal line. The player that hits every target the fastest wins the challenge.

This event measures the speed of the player’s shots. In the challenge, a minimum of four players shoot the puck at the goal from 30 feet out, as hard as possible. Players can start as far back as the nearest blue line and skate towards the puck before hitting it. Each player takes two shots, and the shot with the higher speed of the two is counted. For the shot speed to be measured by the radar, it must successfully go in the goal. If a shot is made but its speed is not recorded by the radar, the player is able to take an additional shot.

The breakaway challenge features five players competing in a shootout challenge that is judged by a panel of six judges, similar to the NBA Slam Dunk Competition. The winner is whoever is granted the highest score after their attempt. Players will typically dress up or attempt to put on a spectacle for this event in order to impress the judges and crowd.

Introduced at the 2022 NHL All-Star Skills Competition, the Fountain Face-Off featured eight contestants shooting at five targets around the center of the fountain. The player with the fastest time hitting all five targets is declared the winner.

The “21 in ‘22” event was a special event for the 2022 NHL All-Star Skills Competition. Its name comes from the popular card game blackjack, in which the goal is to reach the number 21 without going over. Since the 2022 All-Star weekend was hosted in Las Vegas, the event was created to commemorate what the city is best known for, gambling. It took place on a portion of Las Vegas Boulevard in an effort to resemble street hockey. Just like the card game blackjack, the goal of the “21 in ‘22” event was to get as close to 21 as possible without going over. Players were challenged to hit oversized cards with a hockey puck, getting the number value of the cards they hit added to their score. The first player that won two rounds wins the event.

This event was only used in the 2020 NHL Skills Competition. The participants include eight male NHL players, along with two women’s players selected by polling on social media. Each participant stands on a platform that is elevated 30 feet above the ice and behind the goal. The objective is for the players to shoot pucks towards targets that are placed on the ice. Each target is worth a varying amount of points. To settle a tie, players must shoot three more pucks towards the targets and whoever scores more points wins the challenge.

Similar to the Shooting Stars event, this challenge was only for the Skills Competition in 2020. As the name suggests, this event involves a 3-on-3 match between American and Canadian Women’s All-Star players. Twenty of the most talented female hockey players are chosen for the event, with ten players from America and ten players from Canada facing off against each other. The match consists of two periods, each lasting 10 minutes, and a running clock. If a penalty is committed, a penalty shot is automatically awarded.

Which players won each event in the 2022 NHL Skills Competition?

In 2022, Jordan Kyrou from the St. Louis Blues won the Fastest Skater competition with a time of 13.550 seconds. For the Breakaway Challenge, Alex Pietrangelo, a defenseman for the Las Vegas Golden Knights, won the event with 64 points. Victor Hedman of the Tampa Bay Lightning recorded a shot at 103.2 mph to win the Hardest Shot competition. Andrei Vasilevskiy of the Lightning and Jack Campbell of the Maple Leafs shared the victory in the Save Streak competition with 9 consecutive saves. Sebastian Aho of the Carolina Hurricanes won the Accuracy Shooting challenge. For the Fountain Face-Off, Zach Werenski from the Columbus Blue Jackets was declared the winner. Dallas Stars’ forward Joe Pavelski won the closely-contested 21 in ‘22 competition.

Who recorded the hardest shot of all time in the NHL Skills Competition?

Zdeno Chara of the Boston Bruins recorded the fastest shot in the 2012 NHL Skills Competition at 108.8 mph. Chara has won the Hardest Shot competition a total of five times during his career. However, in the 2020 AHL All-Star Skills Competition, Martin Frk of the Ontario Reign surpassed Chara’s record with a shot that clocked in at 109.2 mph. Although he is not in the NHL, Frk broke the record of the fastest shot ever recorded.

Who has the best time for the Fastest Skater competition?

At the 2016 NHL Skills Competition, Dylan Larkin of the Detroit Red Wings broke the record for the Fastest Skater competition at 13.172 seconds. This time has faced some controversy over the years because Larkin began his lap from the blue line and gained momentum before reaching the red line starting point. Some believe that Connor McDavid of the Edmonton Oilers would hold the record if he started at the blue line instead of the red line.

Who holds the record for the highest save streak?

The Save Streak competition was introduced in the 2018 NHL Skills Competition. Since then, Marc-Andre Fleury of the Vegas Golden Knights has held the record with 14 consecutive saves in 2018. Fleury beat Pekka Rinne of the Nashville Predators, who saved 13 consecutive shots in the event. In the following two years, Henrik Lundqvist won the event in 2019 with 12 consecutive saves, and Jordan Binnington won in 2020 with 10 consecutive saves.