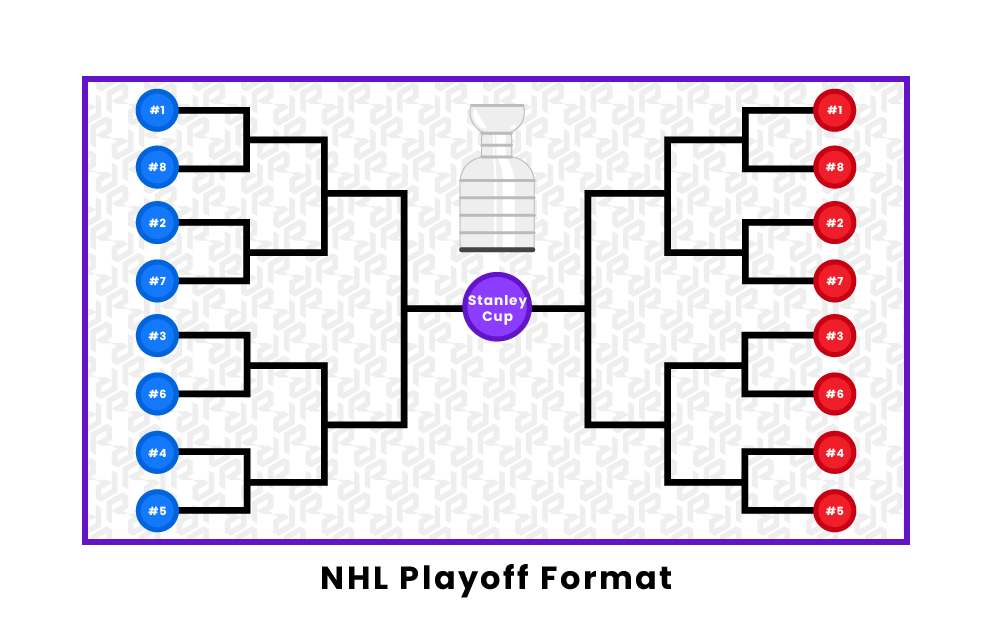 The NHL playoffs are an exciting event for hockey fans all over. Similar to many other sports playoffs, the NHL usually uses a bracket system to organize its playoff games. Due to the unprecedented times in 2020, the NHL playoffs began in August instead of April, and the format was changed accordingly.

Qualifying for the Playoffs

The NHL Playoffs feature the 16 best teams in the league, eight from each conference. The first, second, and third-place teams in each of the four divisions make up the first 12 spots. The remaining four playoff spots are reserved for each conference's next two highest point-earners, regardless of division.

The NHL Playoffs do not feature reseeding after the first round, unlike some other professional sports. That means that the #1 and #2 seeds will be on opposite sides of the bracket in each conference.

Following the Conference Finals, the two winning teams face one another in the Stanley Cup Finals. Like the previous rounds, the series is played to the best of seven games. The first team that earns four wins is awarded the Stanley Cup.

Home ice advantage refers to the team in a playoff matchup that is a higher seed, which means they play four out of the seven games at home. The NHL Playoffs follow a 2-2-1-1-1 format. This means the team with home ice advantage will be the home team in the first two games, the fifth game, and game seven. The lower seed will be at home in games three and four, as well as game six.

Does the NHL reseed after the first round of the playoffs?

No, the NHL does not reseed after the first round of the playoffs. Teams are locked into their section of the bracket and are able to see the path to the cup, meaning they know what teams they could possibly play in the second round and onward.

What are the rules for overtime in the NHL playoffs?

Instead of a five-minute overtime featuring teams playing 3-on-3, overtime in the NHL playoffs is formatted similar to regulation periods. Teams will play 20-minute periods of 5-on-5 hockey until a goal is scored. The overtimes will be continued until there is a winner, and no shootout will take place.

How does NHL playoff seeding work?