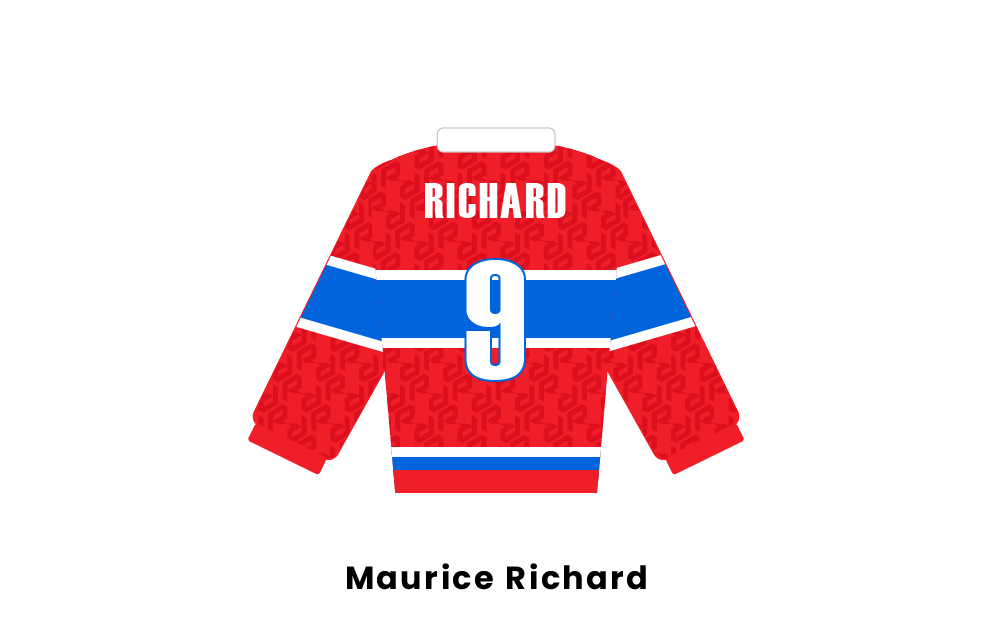 Maurice Richard was a professional hockey player who spent his entire career with the Montreal Canadiens of the National Hockey League. Richard is famous for taking the puck to the high-danger areas and scoring many goals. He is also remembered as a spectacularly fast and strong player, which is how he earned his nickname: “The Rocket.”

Richard passed away in 2000, but his legacy lives on in the hockey world. Ever since 1999, the NHL player who scores the most goals in a given season is awarded the Maurice Rocket Richard trophy.

Richard was a tough competitor, and he didn’t always play nice. He once struck an official and was suspended for the entire rest of the season for his violent act. Fans were angered by the harsh suspension and protested in an event that was named the “Richard Riot.” Outside of Montreal, however, most fans had no issue with the suspension.

Richard made most of his money from his salary playing hockey. He also accumulated some of his cash from being a brand ambassador for the Canadiens after he retired from playing. After three years of being a brand ambassador, he was named Vice President of the Canadiens, another job that helped him financially. However, he ultimately resigned after a year: he felt the role he had was powerless and solely an honorary role.

Maurice Richard played 18 NHL seasons from 1942 to 1960. From a young age, Richard scored at ease. As a 22 year old, Richard scored 54 points in 46 games during his first full season in 1943-44. Then, as a 23 year old, Richard had the season of a lifetime, scoring 50 goals in 50 games. In the entire history of the NHL, only five players have ever scored 50 goals in their team’s first 50 games of a season: Maurice Richard, Mike Bossy, Wayne Gretzky, Mario Lemieux, and Brett Hull. Richard was also the first NHL player to ever score 50 goals in a single season!

Perhaps more notable than the awards Maurice Richard won is the trophy, which is named after him. The “Maurice Rocket Richard” trophy is an annual NHL award given out to the player who scores the most goals in the regular season. Alex Ovechkin has dominated the competition for this trophy; no other player has won the trophy more than twice, whereas Ovechkin has won the trophy nine times.

Joseph Henri Maurice “Rocket” Richard was born in Montreal, Quebec, in August 1921. Maurice was the oldest of eight children: three girls and five boys. One of Maurice’s younger brothers was Henri Richard, who also had an impressive NHL career.

Maurice Richard grew up in a household which struggled financially. The family relied on government aid for six years during the Great Depression.

Maurice Richard did not play his first game of organized hockey until he was 14 years old, which is incredible considering his lasting legacy on the sport. Rather, as a young boy, he often played games that were derivatives of hockey, such as “shinny” and “hog.”

Once he did get into organized hockey, Richard dominated. One year, he scored 133 of his team’s 144 total goals en route to a championship.

Richard eventually married his wife Lucille and had seven children. Lucille passed away in 1994, 52 years after marrying Maurice Richard. Richard himself passed away in 2000.

Who is the Pocket Rocket in hockey?

How many times did Maurice Richard win the Stanley Cup?

Did Maurice Richard ever win the Rocket Richard trophy?

The Maurice “Rocket” Richard trophy was created in 1999, just a year before Richard passed away. Richard never won the trophy since it was not created until long after he retired. However, the trophy is awarded to the player who scores the most goals, so the better question may be, “did Richard ever lead the NHL in goals?” Richard led the league in goals five times between 1944-45 and 1954-55. That means Richard would have won the Rocket Richard trophy five times in his NHL career if the award existed at the time.