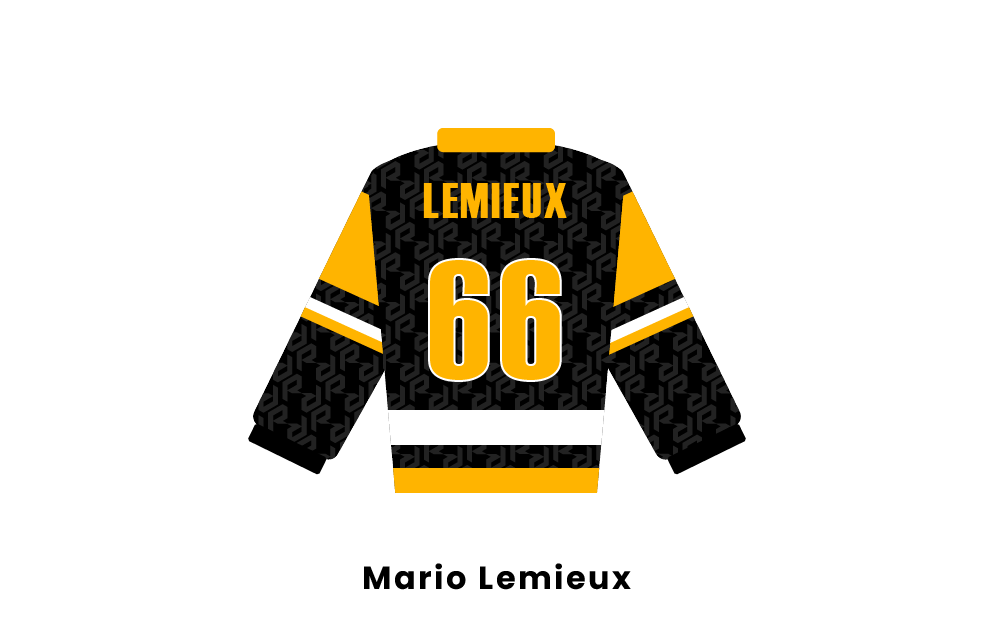 Mario Lemieux is a retired NHL player and partial owner of the Pittsburgh Penguins, the team which he spent his entire NHL career playing for. Lemieux is remembered as one of the greatest hockey players of all time, thanks to his brilliant offensive ability to score points.

Lemieux was born in 1965 and played in the NHL for 17 seasons between 1984 and 2006. He won two Stanley Cups and various awards for his impressive play. He was featured as a part of the NHL 100 Greatest Players, which was a commemoration of the best NHL players after 100 years of the NHL’s existence.

Lemieux retired twice, coming out of retirement to play a couple more seasons the first time. Following the 2005-06 season, Lemieux hung up the skates for good. He got into ownership by restructuring the money owed to him on his last contract into equity in the team. Lemieux not only helped get the organization out of bankruptcy, but also established a culture of excellence that remains decades later.

Mario Lemieux is one of the richest hockey players of all time, with a net worth believed to be around $200 million. Lemieux first made his money by playing in the NHL, but increased his value by eventually owning a 25% stake in the team he once played for. After he retired in 1997, Lemieux bought the Pittsburgh Penguins, who were bankrupt at the time. Then, in 2000, Lemieux decided to unretire and return to professional hockey, despite already owning the team! Lemieux played on the league average salary, rather than a huge contract as he probably deserved.

Lemieux’s other most notable awards include the Hart Trophy, awarded to the NHL player most valuable to his team, the Conn Smythe award for playoff MVP, and the Ted Lindsay Award for most outstanding player as determined by NHL players. Lemieux won the Hart Trophy three times from 1988 to 1996 and won back-to-back Conn Smythes in 1991 and 1992. Lemieux won the Ted Lindsay award four times, between 1986 to 1996.

Perhaps the most impressive season for Lemieux was 1995-96 when he won the Hart Trophy, Ted Lindsay Award, and the Art Ross Trophy. That year, he scored 69 goals and 92 assists for a staggering 161 points in just 70 games.

Mario Lemieux was the third and final child born to Jean-Guy and Pierrette Lemieux and grew up with his family in Montreal. Mario had two older brothers: Alain and Richard. The family was working-class and lived in the Ville-Émard district.

Lemieux spent his NHL days living in Pittsburgh and eventually settled into the suburbs in Pittsburgh following his playing career. He had four children with his wife, Nathalie Asselin, who he married in 1993. His only son, Austin-Nicholas, played college hockey for Arizona State University before retiring from hockey to focus on his golf career.

In 1993, Lemieux was diagnosed with Hodgkin lymphoma. The same year, he began the Mario Lemieux Foundation, which funded medical projects and various cancer research institutes. Lemieux has engaged in numerous charitable projects, including being a big part of the founding of Athletes for Hope in 2007, an organization that helps athletes get involved in donations.

Did Lemieux ever play against Wayne Gretzky?

Mario Lemieux and Wayne Gretzky are arguably the two greatest hockey players of all time, with most people giving the edge to “The Great One,” Wayne Gretzky. The two clashed a number of times; they played 27 games against one another. If Lemieux could have stayed healthy, the two would have faced off 44 times, but Lemieux missed a lot of time due to hip and back injuries, plus a battle with Hodgkin’s Lymphoma.

Did Lemieux ever win the Stanley Cup?

How good was Mario Lemieux?

Most people say Mario Lemieux was the second or third-best player of all time, with Wayne Gretzky typically earning the top honors. Bobby Orr is often ranked ahead of Lemieux, as well. However, outside of those two players, there is rarely anyone placed above Lemieux. Furthermore, some analysts have made the case that Lemieux was actually the greatest player of all time, outshining Gretzky and Orr. The consensus seems to be that Lemieux is, at the very least, a top-five player in hockey history.