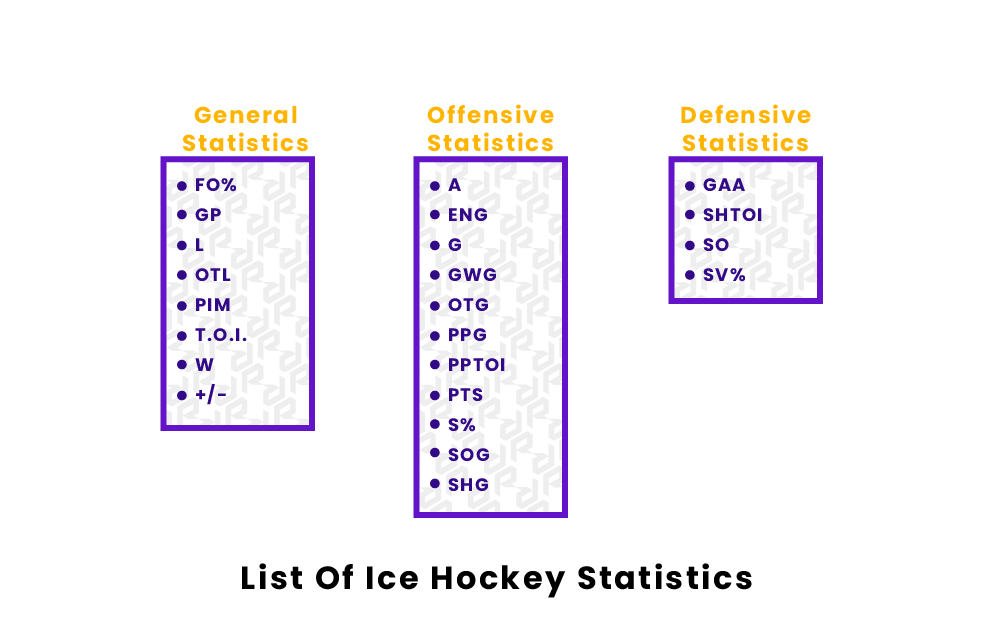 Games played in hockey keeps track of how many games during a season a player sees action in. For a player to record an official game played, they need to step foot on the ice or serve a penalty.

Wins are the number of games won by a goaltender or team. Wins are not tracked for individual players as they are only on the ice for one-third of the game at most. For teams, a win means two points in the standings.

Losses are the number of games lost by a goaltender or team. When a team loses a game, they are awarded zero points in the standings.

Overtime losses in hockey refer to games that a team loses after regulation has ended. This means that the game ends in a tie and needs extra time to decide a winner. These games can end in either overtime or a shootout if overtime also ends in a tie. When a team records an overtime loss, they are rewarded with one point in the standings.

Penalty minutes are the total amount of time that a player spends in the penalty box for committing penalties throughout a game or season.

Time on ice in hockey is a statistic that records how many minutes and seconds a player records on the ice. This statistic is important because many shifts in hockey last one minute or less.

Empty-net goals are goals that are scored when the other team has pulled their goalie for an extra attacker in an effort to tie that game when they are losing late. These goals usually put the game out of reach, effectively ending the game.

Game-winning goals are goals that are scored that give a team a one-goal lead. These can be scored during regulation or overtime. They can also be scored early in the game as they are the goal that made the team have more than the other, no matter what the score is at the time.

Overtime goals are goals that are scored in the extra period of a hockey game. Games go to overtime if they are tied after the full sixty minutes. Overtime goals end the game, and it is declared a victory for the team that scored.

Power play goals are goals that are scored while a team is playing with one extra skater than the other team. This is due to the other team committing a penalty and one of their players having to serve time in the penalty box.

Power play time on ice is the amount of time a player spends in play while their team has one more player than the other team. This time is usually reserved for the best offensive players as it is one of the best opportunities in the game to score a goal.

Points in hockey are a combination of goals and assists that a player records. A point is given for both the primary and secondary assists on a goal.

Shots on goal in hockey track how many times a player puts the puck on net that requires a goalie to make a save. Shots on goal are not recorded if the puck misses the net or if a shot is blocked by a defending player.

Shorthanded goals are goals that are scored while a team is playing with one less skater than the other team. This is due to the other team committing a penalty and one of their players having to serve time in the penalty box.

Goals against average in hockey is a statistic that tracks how many goals a goalie lets in on average per sixty minutes played. This does not account for empty-net goals.

Shutouts in hockey track the number of games that a goalie plays where they don’t allow a single goal to be scored. These games also count as wins for a goalie.

Save percentage in hockey is a statistic that shows what percentage of shots on goal a goalie saves. This percentage tells how reliable a goalie is and if they should be trusted to save a large number of the opposing team’s shots.