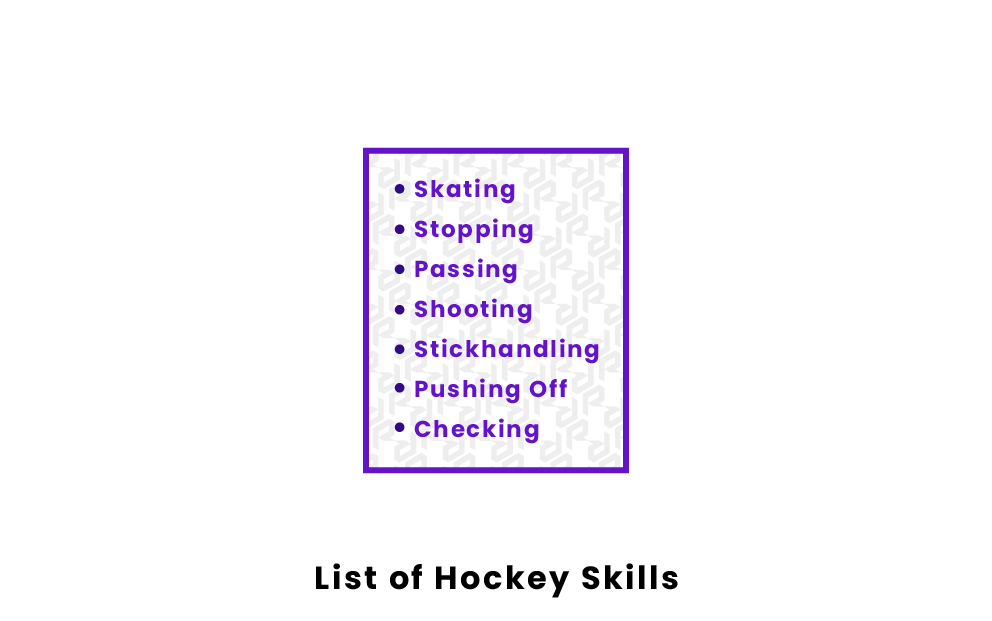 Hockey is a unique sport that takes place on an ice rink, forcing players to know how to skate. It also uses specialized equipment and padding compared to other professional sports. The list below will show the most basic skills needed in order to become a good hockey player.

It becomes virtually impossible to play the sport of ice hockey if you do not know how to ice skate. If you are just beginning, it is important to get skating lessons and wait before joining a hockey team. Learning how to skate forward, backward, and change directions quickly can take some time.

Included in the art of skating, you must know how to stop quickly without falling. This will help you not collide with players during a game as well as get where you need to go quickly. Being able to stop on a dime allows you to reach the puck faster, which could result in a goal for your team.

Passing in hockey is important because you are not always passing to a physical player. Sometimes you have to indirectly pass the puck against the boards or lead it in front of your teammate on the other side of the ice so that the opponent cannot reach it. There are two main types of passes; a regular pass and a saucer pass. A regular pass will stay on the ice, while a saucer pass is elevated to avoid obstacles such as opponents’ sticks and bodies. It is important to be proficient in both in order to play hockey well.

This skill is the most important to hockey besides knowing how to skate. Being a good shooter will help your team win because scoring goals is the only way to win a game of hockey. Three of the most important kinds of shots in hockey are the wrist shot, slapshot, and one-timer. A one-timer is when you shoot the puck directly off of a pass without even controlling it; your first contact with the puck is with the slapshot motion.

Stickhandling is important in order to protect the puck from opponents. To be a good stickhandler means that you can weave in and out of defenders without losing control of the puck. Stickhandling includes using dekes, which are special moves designed to escape defenders. Some players have dekes named after them because they created and perfected that move, such as “The Datsyuk,” named after Red Wings legendary stickhandler Pavel Datsyuk.

This skill is good to have because it will help you stay in the action throughout the game. Pushing off is the ability to gain speed fast after making a quick stop. This allows you to make plays all over the ice without throwing yourself out of position. If you forget to push off, you might be the one to blame for a breakaway chance.

Checking in hockey is used to put pressure on the puck carrier and force a turnover. There are three main types of legal checks; a body check, a stick check, and a hip check. A body check is when a player uses their body to initiate contact with an opponent, usually leading with the shoulder. Hip checks involve a player using their hip to make contact with an opponent. These are typically regarded as the most dangerous type of hit because they often result in players going airborne. Unlike hip and body checks, a stick check involves a player using their stick to make contact with the puck carrier’s stick. They usually come in the form of a stick-lift or a poke.