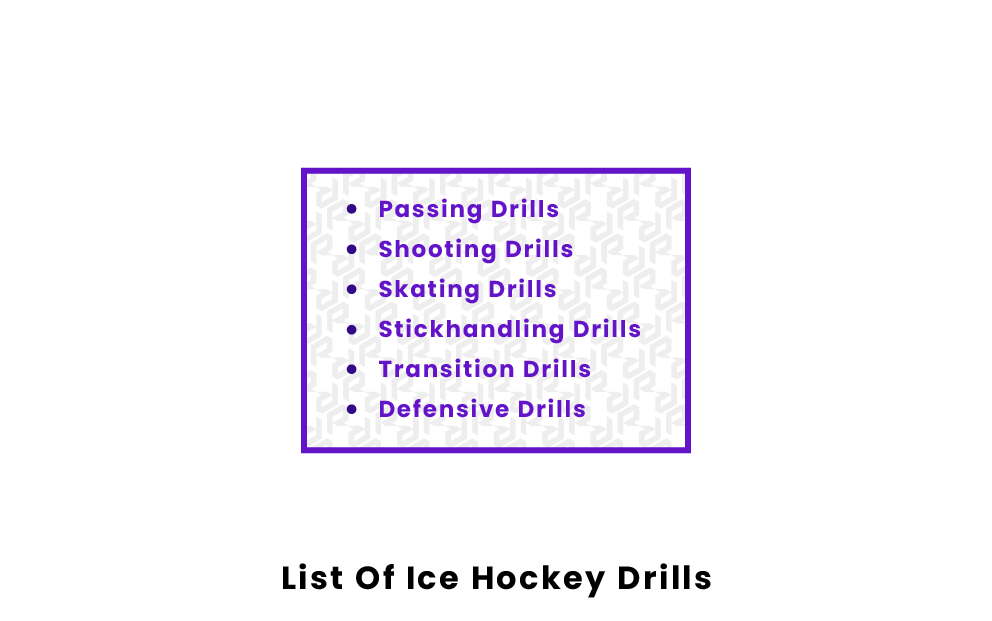 Playing hockey at a high level requires many important skills. Drills that improve passing, shooting, skating, deke/stickhandling, and checking are the things you should focus on in order to become successful on the ice. The list below will show you what to do while practicing.

Set up with a teammate 20 feet apart. You will begin to pass the puck back and forth. Make sure to focus on cupping the puck while passing so it does not fly off the ice. When receiving a pass from your teammate also be sure to cushion the speed of the incoming pass.

Take the basic skills learned from basic passing drills and apply movement. Start at the goaline with a teammate 20 feet apart. Skate down the ice and pass the puck back and forth. When you reach the other goal line, switch sides with your partner. This drill can also be completed alone, using the boards as a makeshift partner.

Set up for a basic passing drill, but place a stick in between you and your partner. Begin to saucer pass the puck to your teammate, making sure to not hit the stick lying on the ice. After successfully passing at this distance, move further apart, placing more focus on accuracy and power.

Divide players into groups of 5, placing them at the 4 face-off circles. Starting with the forehand, have players pass the puck to each other around the circle. You can later switch to the backhand after enough practice on the forehand. This reinforces both short and quick passing, allowing the team to add speed and precision to its game plan.

Set up two lines of players who are facing each other at corners of the rink. Place one cone near each line. With a goalie in both nets, player one skates toward the cone farthest from them. This player will skate around that cone and receive a pass from player two. Player one will then skate back toward the goalie near the line they started at, taking a shot on net. Player two will repeat the process by skating toward the far cone after passing to player one.

Line yourself up with the faceoff circles in the middle of the ice. Mark the net with 5 locations; left-high, left-low, five hole, right-high, and right-low. With a bunch of pucks by your side, practice hitting the targets on the net. These targets can be imaginary or real, but the goal is the same.

Starting at the goal line, skate to the face-off circle. Once you reach it, fall to the ice with your arms and legs fully stretched out. Next, get up as fast as you can by first getting on your knees and then feet. Do this at every mark on the ice until you reach the other goal line (blue line, red line, blue line, face-off). After mastering this, repeat the drill with a stick in your hand.

Skate to the blue line from the goal line. Once you reach it, turn around and skate backward until you reach the next blue line. Once there, turn again and sprint to finish at the goal line. Later, add in the face-off circles and red line as turning points. This drill is important for transitioning from offense to defense.

Have all the players line up on the goal line without their sticks. Pick a couple of coaches to play as "minnows." The coaches must stay inside the blue lines at all times. When the whistle blows, players must make it to the opposite goal line without being touched. Those who are caught become minnows alongside the coaches. The last player standing wins.

With a puck, skate around a face-off circle. Focus on maintaining control of the puck while you skate. Increase your speed as you get more comfortable. You can also do figure eights by using both face-off circles. This drill is important for tight areas between the face-off circles in either zone, helping you focus on the puck so that you do not turn it over.

Place five cones from end to end in between the face-off circles. Have players line up in the corner of the rink. Players should deke in and out of each cone until. When they reach the end, they will turn around and repeat the process on the way back. This drill can be completed with a specific deke or the player's choice.

King of the Hill

Line up 4 players in the center ice circle. Give each player a puck. Have them circle the ice while controlling the puck. The objective is to be the last athlete standing without losing your puck. Players can also try and make each other lose control of their puck in order to win.

Two players start in one corner of the rink. Two cones are placed at the blue line about 5 feet apart. Player one (offense) is followed by the defender around the cones in an arc-like direction. The offensive player will then drive to the net receiving a pass from a coach standing in one of the face-off circles. The defender's job is to back check the offensive player and steal the puck.

Pair up with a player of similar skating skill. Player one will skate along the boards, making frequent stops and changes of direction. The goal of the drill is for player two to mirror player one and stay in front of them. This teaches players the ability to calculate correct angles when chasing down an opponent.

Line players up at the red line, with cones surrounding the center face-off circle. On the whistle, have one player from each side skate to center and past each other around the cones. The first player to retrieve the puck in the zone will be on offense, while the other player will backcheck and attempt to steal the puck.

Have players partner up and start at the goal line. Player one will have the puck. Player two will act as the defender. The objective is for player two to steal the puck by backchecking before player one reaches the opposite goal line.