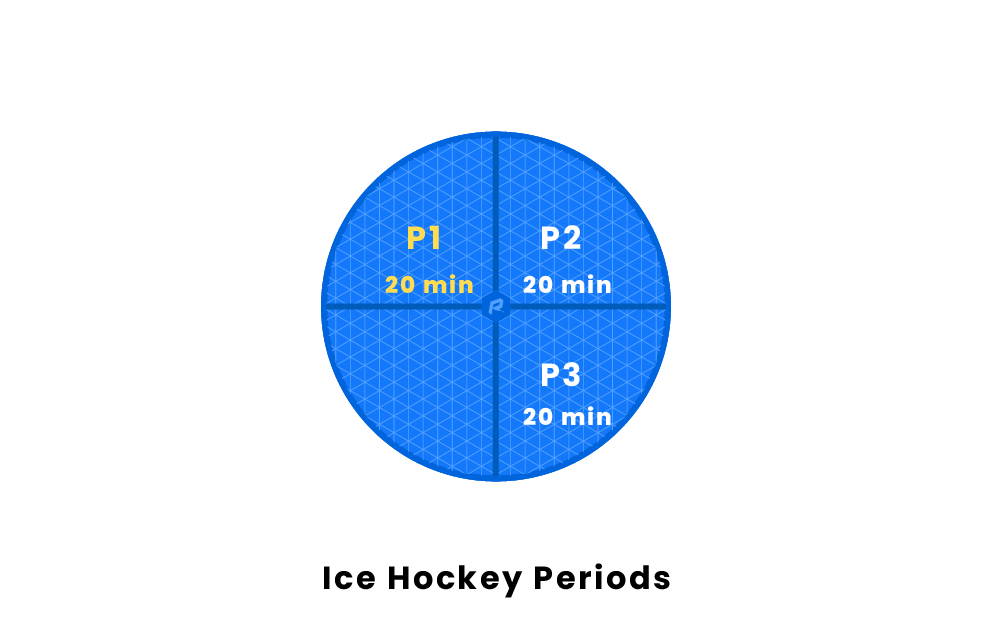 The numbers of periods and their time length vary between different sports. Ice hockey has 3 periods per game which are separated by two intermissions lasting 15 minutes each. A regular ice hockey game period lasts for twenty minutes. After each period, teams switch ends and continue to do so until the game is over. The clock only runs when there is a puck on the ice in play, other than that the clock will be stopped. In total a hockey game can take around 2 and a half hours. Six players are on the ice for each team, including a goalie, and the goalie can be pulled to add an extra player for the team. The five other players are typically rotated throughout the game lasting 30 to 2 minutes or longer.

After the regular game period is over and the score is tied, a 5 minute over time will commence. Whichever team scores first during overtime ultimately wins the game. If the overtime period ends and neither team has scored a goal, then the game moves into sudden death. The overtime period has 3 skaters and one goalie, although a team may decline the use of their goalie in order to add an extra player on the ice. During the regular season of hockey, each team gets a point when they tie and the overtime winning team gains an extra point.

When neither team scores a goal during overtime, a sudden death sequence is commenced. A game winning penalty shot competition will play out between both teams and whichever team scores first wins. Each team is given three shots during sudden death. Although teams can decline to be a part of the shootout which will result in a "shootout loss", meaning the other team wins by default.

What sports have 3 periods?

Ice hockey is the only sport divided into 3 periods. Each period lasts twenty minutes, and the clock runs when the puck is in play. There are two intermissions between the first and second period that last for 15 minutes each. Certain ice hockey games that tie may go into overtime causing 5 extra minutes to be allotted after the normal game time. Although if the tie does not break during overtime then the game hosts a shootout to declare a winner.

Yes overtime in ice hockey means sudden death for both teams. Overtime is an extra allotted amount of time added to the end of a tied ice hockey game. In the NHL an overtime period lasts for 5 minutes and both teams play with 4 players each. If there are penalties involved then there can be a lesser amount of players. If there is still a tie at the end of overtime, a shootout will happen to decide which team shall win.

How long is an ice hockey game?

A full professional National Hockey League ice hockey game is 60 minutes long. In between the three twenty minute periods are two fifteen minute intermissions. If the game ends and the score is tied, then there is a 5 minute overtime period in which the first team that scores wins the overall game. If neither team scores during overtime then the teams go into sudden death and a shootout is conducted to declare a winner.

How long are overtime periods in hockey?

Overtime periods are 5 minutes long and can end anytime within those 5 minutes if either team scores a goal during overtime. Overtime only occurs when the normal game time has run out and the tied score has not been broken. Typically if a team does not score a point within overtime then sudden death will occur and a shootout will commence. Each team has 3 chances to score a goal and whichever team scores first wins the game and is declared victor.

Hockey Lingo And TerminologyHockey Neutral ZoneWhat Is A Hat Trick In Hockey?
What Is A Line In Hockey?What Is A Breakout In Hockey?Hockey Defensive Zone
PreviousNext