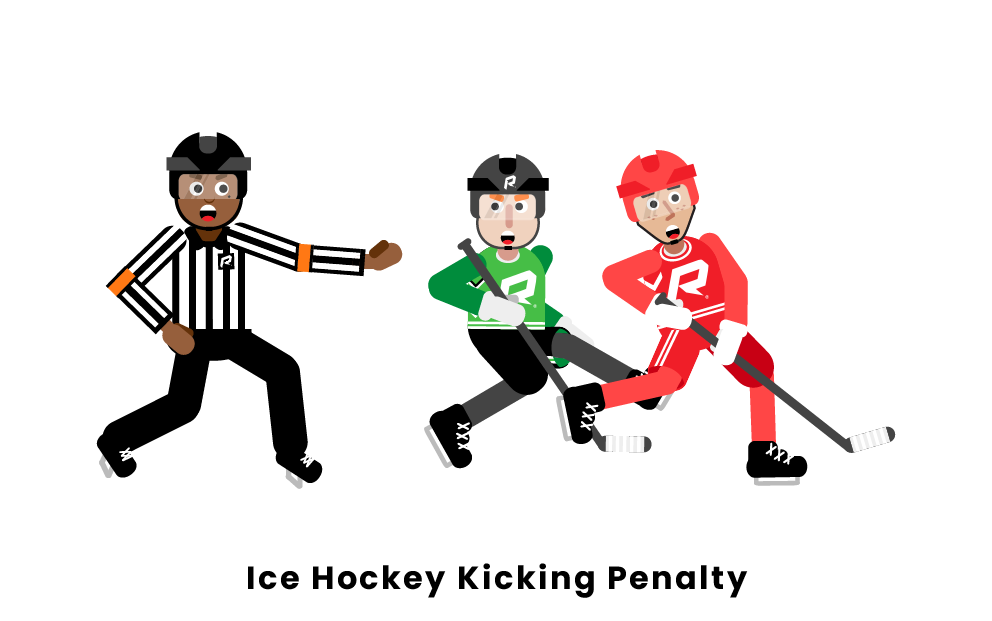 Kicking in hockey is a physical foul that occurs when a player uses their skate to kick or push off of an opponent in a kicking motion. Kicking opponents is never allowed. This is a dangerous foul that results in a match penalty and the ejection of the offending player.

Kicking in hockey is a penalty that is committed when one player uses their skate to kick or attempt to kick an opponent. No player, including the goalkeeper, is permitted to use their skate to kick an opponent at any time or at any position on the ice. Using a skate to push off of an opponent in a kicking motion (with the blade out) is also considered a kicking penalty. Kicking is a serious offense, as the sharp blade of a skate can cause major injury to a player when kicking them.

In light of the danger of kicking, a kicking penalty is always punished with a match penalty, resulting in the offending player being immediately ejected from the game. The offending team must select another player to serve a five-minute unreleasable time penalty on the penalty bench, during which that team will be short-handed on the ice. The match penalty is entered in the scorebook as a ten-minute time penalty for the offender. In addition, the offender will face a commissioner’s review and potential fines before being allowed to play another game.

Unlike kicking players, kicking the puck is permitted in hockey and will not incur a penalty. Any player may kick the puck at any position on the ice during play. However, a kicked puck that enters the goal will not result in a goal being scored unless it ricochets off a player’s stick after the kick. A kick shot, in which a player uses their skate to propel their stick forward into the puck, is not permitted and will also not result in a goal being scored.

The result of a kicking penalty being called is a match penalty assessed to the offender. The offender must leave the game immediately, and their team must choose another player to serve a five-minute unreleasable time penalty in the penalty box. In amateur hockey, using a skate to push off an opponent in a non-kicking motion is still a kicking penalty, but it is instead punished with a major penalty plus a game misconduct penalty.

What is a kicking penalty in hockey?

In hockey, a kicking penalty is a penalty assessed when one player uses their skate to kick an opponent or push off from an opponent using a kicking motion. Kicking may be called on any player, including the goalkeeper. Like other types of penalties in which the offender has a perceived intent to injure, it is punished by a match penalty being assessed on the offender, resulting in an ejection.

What are the consequences of kicking an opponent in hockey?

The consequences of kicking an opponent in hockey are being assessed a match penalty and immediate removal from the game. The offender is required to promptly leave the ice and stay out for the remainder of the game. As a result of the match penalty being assessed, the offender’s team must select a player, not the offender, to serve a five-minute unreleasable time penalty in the penalty box, and their team must play short-handed during the penalty. The offender will also be subject to a commissioner’s review before returning to play.

Can you kick the puck in hockey?