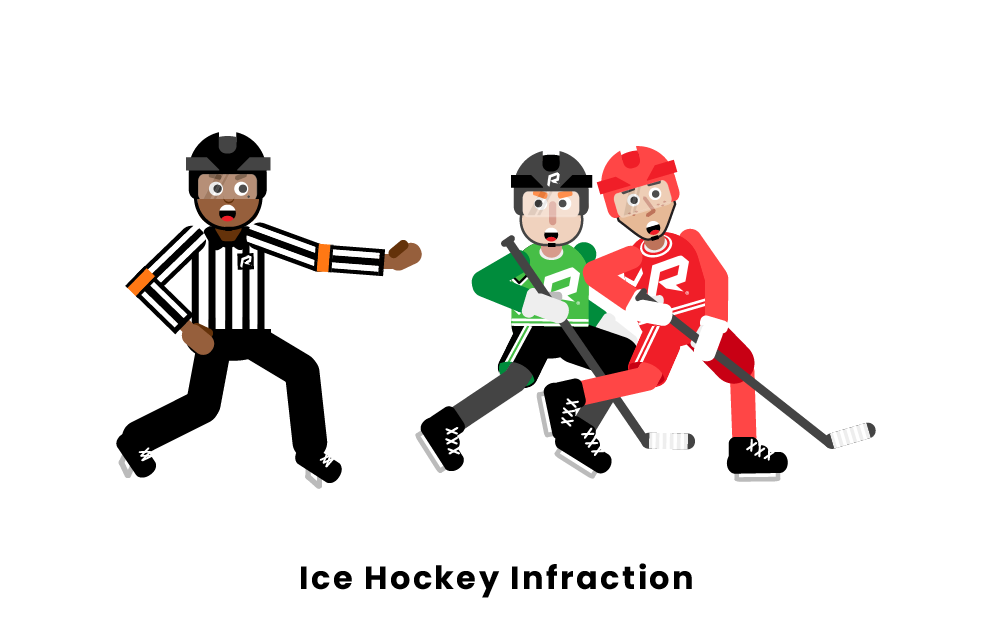 A hockey infraction is any action committed by a player or team that breaks the rules of the game. Severe infractions will result in penalties where the player at fault will be removed from the ice for a period of time. Minor and major penalties cause the offending team to be shorthanded for either two or five minutes. More intense infractions, where a player's intent was to injure an opponent, can be ruled a misconduct or game misconduct. Misconducts cause a player to serve 10 minutes in the penalty box, while game misconducts are automatic ejections from the game.

There are also lesser infractions not considered penalties that will cause play to stop. These are the most common rule violations known as offsides and icing. A player responsible for committing this type of infraction will not be sent to the penalty box. Instead, a faceoff will occur at one of the faceoff circles closest to the location of the infraction.

What is the most common penalty in hockey?

The most common penalty in hockey is offsides. This penalty is called when a player enters the offensive zone before the puck. In order to be considered offsides, a player must have both of their skates across the blue line. In addition, a referee will only stop play if the player offsides touches the puck. To negate an offside penalty, all players on the offensive team must vacate the offensive zone and re-enter legally.

What's an icing call in hockey?

Icing is a penalty called when a player throws a puck past the center line and the opposing team's goal line without being touched by another player. This penalty prevents teams from sending a puck into the offensive zone and then chasing after it. Icing results in a faceoff located in the offending team's defensive zone. During a penalty kill, the icing rule is not in effect for the team down a player.

How do you get a major penalty in hockey?

Major penalties are assessed when a player's intent was to harm an opposing player. These fractions are determined at the discretion of the official. Minor penalties may be increased to a major if the infraction committed injured the opposing player. Common penalties that result in a major penalty include: boarding, charging, spearing, slashing, hits to the head, or fighting. For fighting major penalties, the two players involved will spend five minutes in the penalty box, but their teams will not lose a player.

Where is the penalty box in hockey?

To separate the player from the game, the penalty box is located on the opposite side of the ice from the team benches. There are two penalty boxes, one for each team, and they are adjacent to the score and time keepers table at center ice. Penalty boxes are surrounded with plexiglass to ensure players safety. The penalty box can be a very uncomfortable place for visiting players since fans sit directly behind the box.