How Much Does An NHL Referee Make? 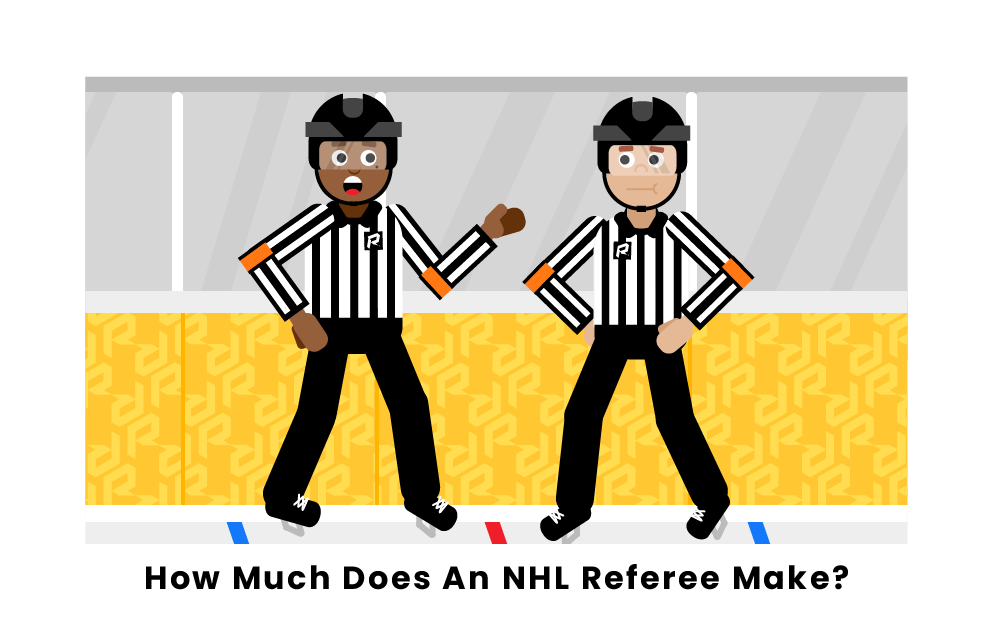 Refereeing an NHL game is undoubtedly an intense and exciting experience, but how much do NHL referees actually earn for supervising games? As with many other sports, the professional salaries of NHL referees are not widely known, but looking at the data about them reveals that most professional hockey referees earn a respectable living from their sport. Here, we will examine the salaries of rookie and veteran NHL referees, how salaries differ between types of referees, and also compare them to the earnings of other referees in the sports world.

How Much Does an NHL Referee Make?

In contrast to most other sports, the NHL is known for having a rather small number of referees. In each season of professional hockey, the league employs 33 full-time NHL referees and 35 linesmen, as well as nine part-time referees. With this in mind, what do these referees earn each year?

As with any field, the salary of an NHL referee often depends on the referee’s level of experience, with inexperienced referees making less money than their more veteran counterparts. According to statistics, the average salary for a first-year full-time NHL referee is around $200,000. The low end of full-time referee salaries sits at approximately $165,000, while at the high end, some referees can make $360,000. However, certain veteran referees with many years of experience can make even more. For example, a referee who has been with the NHL for 15 years may earn as much as $430,000 each year.

The average salary of an NHL referee is much higher than that of the average worker, but it nonetheless represents only about 10% of the salary made by a professional NHL player. In comparison to referees, NHL players earn a salary of roughly $3,000,000 a year, on average.

NHL referee salaries do not only vary by experience, but also by position. There are two types of referees in the NHL, the full-time referee and linesmen. Full-time referees, who are responsible for being on the ice and watching the entirety of the game, generally make the salaries described above. Linesmen, however, perform different services and are particularly responsible for watching the center and blue lines on the ice, looking for violations.

In addition to full-time referees and linesmen, each NHL game also employs standby officials, who can be called up onto the ice in the event of an injury or other issue with an acting referee. Standby referees generally earn a flat fee of $1,000 for simply being in the stadium, and if they are called onto the ice, that fee rises to $2,750. A standby linesman receives $650 for being present at a game and $1,775 for being called up to officiate.

How Do NHL Referee Salaries Compare to Other Sports?

Do NHL referees get paid per game?

NHL referees earn an annual salary for their work, meaning that they do not get paid per game, as many other referees do, but rather make a predetermined amount of money for the season. However, when considering that each NHL referee works about 73 games each season, it is possible to determine the amount they make “per game” by dividing their salary by 73. Therefore, an NHL referee who makes $200,000 per year would be earning approximately $2,740 per game, while a higher-paid referee with a salary of $360,000 per year would make around $4,932 per game.

Is an NHL referee a full-time job?

NHL referees are full-time employees, unlike some other major sports leagues, where referees are considered part-time workers. As a result of their full-time status, NHL referees receive an annual salary, benefits, and travel stipends from the league. These benefits allow them to maintain the busy travel schedules they face when officiating their 73 games each hockey season.

Do NHL referees make extra during the Stanley Cup Finals?

NHL referees do make extra money for officiating playoff games, as well as the Stanley Cup Finals. According to recent figures, NHL referees can make anywhere from $20,000 to as much as $27,000 for supervising playoff games. Meanwhile, NHL linesmen also make playoff bonuses, coming in at approximately $17,250 per round.

Pages Related to How Much Does An NHL Referee Make?