How Does Scoring Work In Hockey? 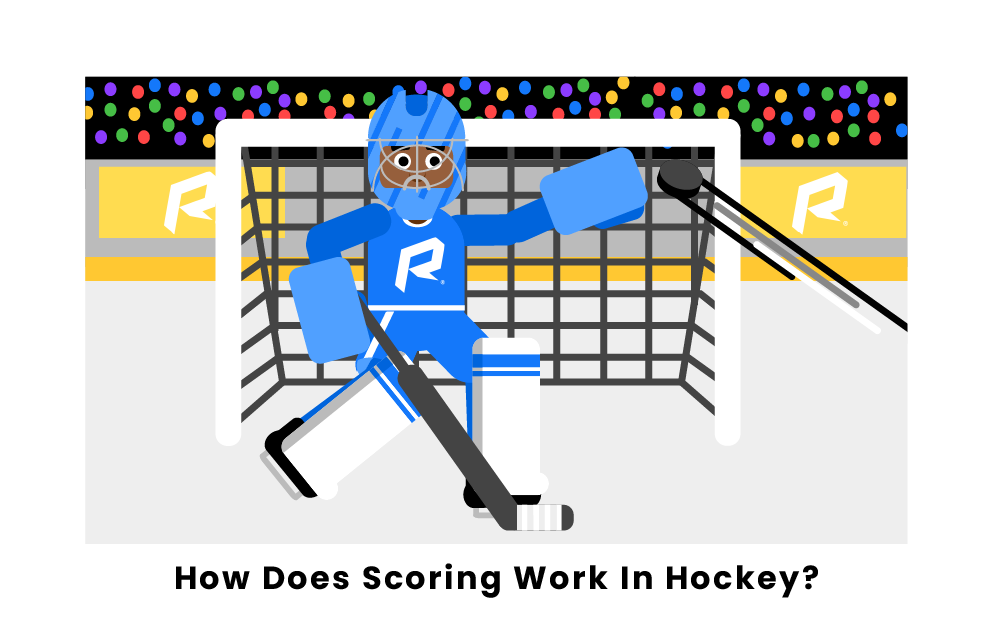 In hockey, athletes score goals to get points. If they can get the puck past the goalie and across the goal line, they get a point. Players can also get points statistically by assisting others to score goals.

The only way to truly score in hockey, the puck must pass under the goal's crossbar, between the posts, and across the goal line. The goal is credited to the athlete on the scoring team that helped the puck into the net, or, in the case of an own goal, the player that touched the puck last before the other team put it into their own net.

There are a few cases where a goal would be waved off or not counted because of an infraction. One rule states that a goal is not legal if a player kicks or throws the puck into the net. If a player is stationary when the puck hits off of a skate, the goal still counts, and it is the presence of a distinct kicking motion that forces a non-goal call. A goal can not hit an official and go into the net. Also, the scoring team cannot interfere with the goalkeeper unless the infraction comes as a result of the other team's players. The puck must also cross the goal line before the period expires regardless of when the shot was taken. A goal cannot be scored if the goal has moved at all during the play. Finally, the scoring player must not commit a high stick infraction while hitting the puck into the net with their stick. This rule means that a player cannot score a goal if their stick hits the puck into the goal if it is above the crossbar.

Video replay has made goal-scoring more exact. This technological advancement has allowed referees to change calls they may have missed including, high sticking, offsides, kicking, and goalie interference. Some fans prefer the traditional method of keeping the call on the ice and hoping that the referees make the correct call, but there have been many great moments throughout the history of hockey tainted by bad rulings by the officials.

Statistically, an assist in hockey is worth the same amount to a player's point total as a goal. It is also the only way to score a point on the stat sheet in hockey other than a goal. An assist is counted to the maximum of two players who touched the puck before the goal scorer. It does not matter how long the play progressed after the first pass. Because of this rule, assists are the primary way that goalies are able to get onto the score sheet, as goalies scoring a goal is an extremely rare occurrence. Even if a third player passed the scoring player the puck, the assist is not recorded for them. All assists come as the result of a goal, but a goal does not necessarily have to have an assist.

While there is no difference in the assist column of the box score, there is a technical difference between the first and second player to pass the goal scorer the puck. The player that most recently passed the puck gets the primary assist and is listed first after the goal scorer in the description of the box score. The secondary assist is credited to the player that passed the primary assistor the puck.

Because the rules of ice hockey tend to be pretty general, the majority of goals are counted, however there are two main violations that can cause a goal to be taken back and not earned. The first violation is if an offensive player kicks the puck into the net, this will not count as a goal.

The second situation that would cause a goal to be recalled is if there is goalie interference, which many times leads to the net's post moving out of position. After the play has finished, if a goal has been counted, a face-off at the center red line will begin play again. If the goal does not count, a face-off will be located in the defensive zone.

What is the record for most goals scored in an NHL game?

The most goals by a single team in an NHL game occurred in the early 20th century when the Montreal Canadiens defeated the Quebec Bulldogs by a score of 16-3 in 1920. This game was a complete rout as the Canadiens led 4-0 at the end of the first period and scored 7 goals in the second period, upping their lead to 11-1. Four Canadiens scored a hat trick or three goals in one game. These players were Didier Pitre, who accomplished a hat trick in only one period, Newsy Lalonde, Harry Cameron, and Odie Cleghorn.

Who has the most points in NHL history?

Wayne Gretzky, nicknamed "The Great One," is the all-time points leader in NHL history with a staggering 2,857 points. It is doubtful that this record will be broken any time soon, and this record is one of the many reasons most people consider Gretzky the greatest hockey player ever. One of the most insane statistics in all of the professional sports is that Gretzky would still be the all-time points leader without his 894 goals, as his assists would give him enough points to stay in first.

On average, how many assists are counted per goal?

Throughout history, there has been an average of 1.67 assists per goal in the NHL. This statistic highlights the importance of passing and teamwork in hockey, as multiple players are usually contributing to each goal. This number has actually increased since the 21st century began, showing how strategy and playmaking is advancing in the modern NHL.

How do teams get points in hockey?

In order for a team to earn a point in ice hockey they must score a goal. In order to score a goal a player on the offensive team must shoot the puck into the net. In order for the goal to count the puck must pass the goal line and goalie and go into the goal. Only one point maximum can be earned by a team at one time. But the limit of points earned at the end of the game is limitless.

How many points are scored when a goal is made in hockey?

Only one point is earned when an ice hockey player scores a goal. This goal can be scored by any one of the ten skaters on the ice at the time. In order for the offensive team to earn a point they must make the puck cross the goalline and go into the hockey net without interfering with the goal or the goals positioning.

Where on the ice are most goals scored in hockey?

Although uniquely in ice hockey a goal can be scored by any player anywhere on the ice, most of the goals scored are located in the offensive zone. Because it is difficult to score in ice hockey, players typically score by shooting as close to the net and goalie as possible. In some special circumstances, however, goals have been scored by players in their defensive zone, on the opposing end of the goal.

Pages Related to How Does Scoring Work In Hockey?