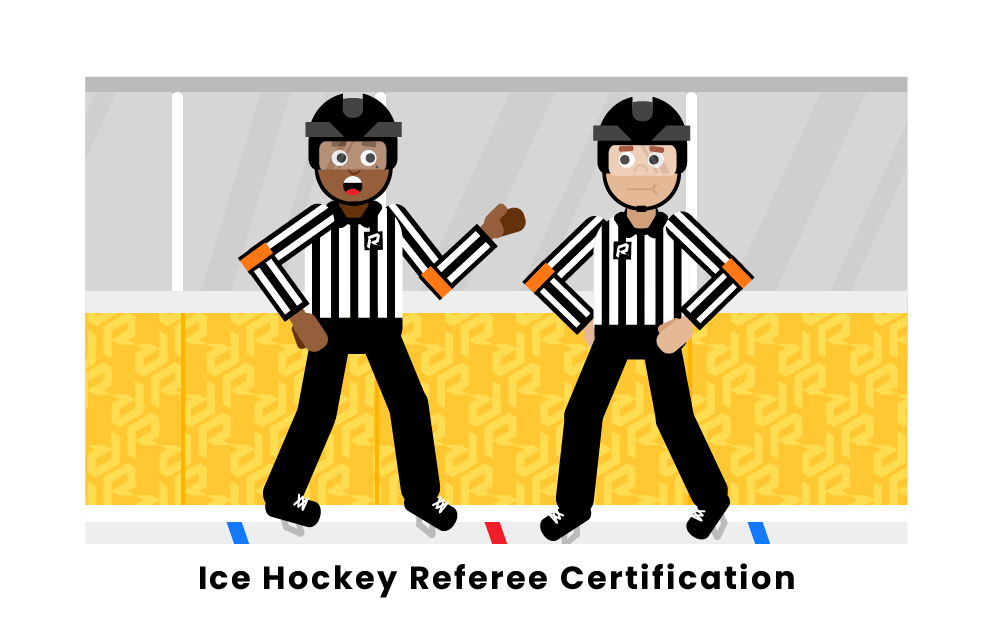 The Hockey Referee Certification is a membership certification that allows you to become an officiator of the league you wish to work for.

It is granted to members of the league as an officiating card. There are referees for each local governing body, Hockey Canada and USA Hockey. Each league has its own official requirements and process for becoming a certified referee. Both Hockey Canada and USA Hockey have similar seminars, online classes, and exams to take in order to receive certification. To become a referee for either league, one must go directly to the officiating member program of that league. The potential referee must then register and complete all of the listed requirements.

While there are no rules on how old someone has to be to become an official, the position needs to comply with country and state child labor laws. While not always the case, this typically means that ice hockey officials must be at least 16 years of age for places with that minimum working age requirement. To be an official, specific membership requirements need to be met on a yearly basis. In order to receive certification, one must complete the officiating membership process, which has multiple steps.

There are specific skill levels that the officiating program has developed based on skill that determines the assignments of officials in USA Hockey. A similar system is also used in the Canadian Hockey League. New officials must start as registered Level 1 officials. These officials are able to officiate the lowest level of hockey games in the league. Officials are then able to move up to Level 2, Level 3, and Level 4 after 1 to 2 years of experience at each prior level consecutively. When advancing to a level, officials must pass all requirements and receive a minimum score on the exam needed for the next level. Once reaching Level 4, an official has gained all the experience necessary to be able to work all levels within USA Hockey. Level 4 officials are the most experienced and of the highest status in the league.

As a certified hockey official, referees supervise each game and make sure rules are followed and enforced. Their decisions have the final call in all discrepancies, and they must stick to the rules when making decisions. After making a call, a referee is no longer able to change their mind on the decision. There is typically more than one official on the ice during a hockey game, with the NHL having four on-ice officials work each game.

Officials have an important duty to keep everyone on the ice safe and enforce consequences to players who break the rules. Referees are the ones who grant players penalties for their misconduct. In addition, referees are responsible for ordering teams on the ice and beginning the game. Referees are on the ice at all times when players are on the ice, even during the warm-ups. At the end of the game, the referees must also sign off on the scoresheet and make sure it is accurate.

In order to become an NHL Referee, officials must have certification and experience as an official in either USA Hockey or Hockey Canada. They must first acquire certification from their respective league and gain experience through officiating games within that league. When gaining enough experience and knowledge, referees are then able to get training from the NHL Officials Association (NHLOA). They must have high knowledge of ice positioning, signaling, penalties, and top-notch skating skills. Training schools have prior NHL referees and representatives teaching and watching prospective officials.

What are the referees called in hockey?

How do you become a hockey referee?

To become a hockey referee, one must go to the local governing body of the league they wish to referee for and begin their registration process. After signing up to be a member and paying a fee, they must then go through the training process. This process includes online classes, books, seminars, and exams. After passing through this, the referee receives certification to officiate games at the beginner level, Level 1. Experience allows them to move up to referee higher-level hockey games.

How much do NHL hockey refs make?

Why do NHL referees have numbers?