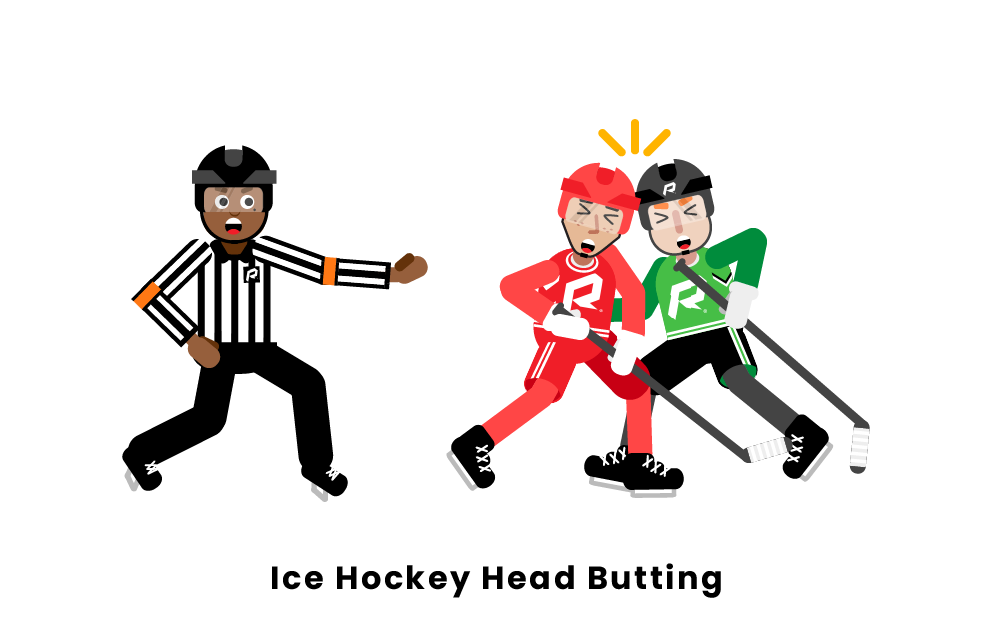 Hockey is a physical game with hard checking and sometimes even fighting, but one thing never allowed in the game is head butting. Head butting is a dangerous penalty that comes with serious consequences for the guilty player across all levels of hockey.

A head butting penalty is when a player uses their head or helmet to deliver a hit to an opposing player’s chest, head, neck, or back at any point throughout the game. Even the least severe offenses of head butting can warrant an automatic ejection via a game misconduct penalty accompanied by at least a major penalty depending on the level of play. In these cases, the referees decide that the head butt was particularly dangerous, and the match penalty is awarded for reckless endangerment. At the NHL level, game misconduct penalties come with a fine, and after three game misconduct penalties are compiled during a season, the player receives a one-game suspension. With each subsequent game misconduct they receive, the league office assesses an additional one-game suspension and increased fines.

Head butting penalties can be called at any point during a game, including after the play has been whistled dead. A head butting penalty should be called if a player uses their head or helmet to deliver a blow to an opponent’s upper body on the ice. These plays are dangerous and considered dirty in hockey and are therefore dealt with seriously by removing players from the game.

At the NHL level, players are always ejected for head butting as they receive a game misconduct penalty that comes with a fine, along with a major penalty to be served in-game. Since the offending player is removed from the game, another one of their teammates must serve the five-minute major penalty. In USA Hockey, two different consequences can occur depending on the severity of the head butt. In plays deemed particularly dangerous, a match penalty for reckless endangerment is called. In less severe cases, a major penalty plus a game misconduct penalty are called.

What is a head butting penalty in hockey?

A head butting penalty in hockey is when a player uses their head or helmet to strike an opposing player. This could be during any point in the game, whether the action occurs when a defender goes to deliver a body check or after the whistle when two players are going face-to-face arguing. These penalties are dangerous and come with serious consequences.

What is the punishment for head butting in hockey?

Players guilty of head butting at any level of hockey are removed from the game immediately. At the professional level, players can also be fined, and after three or more infractions, they will be suspended. If their first infraction is particularly dangerous, it can also warrant a suspension after league review. The guilty players also receive a total of ten minutes of penalty time added to their stats.

Is head butting a misconduct penalty in hockey?