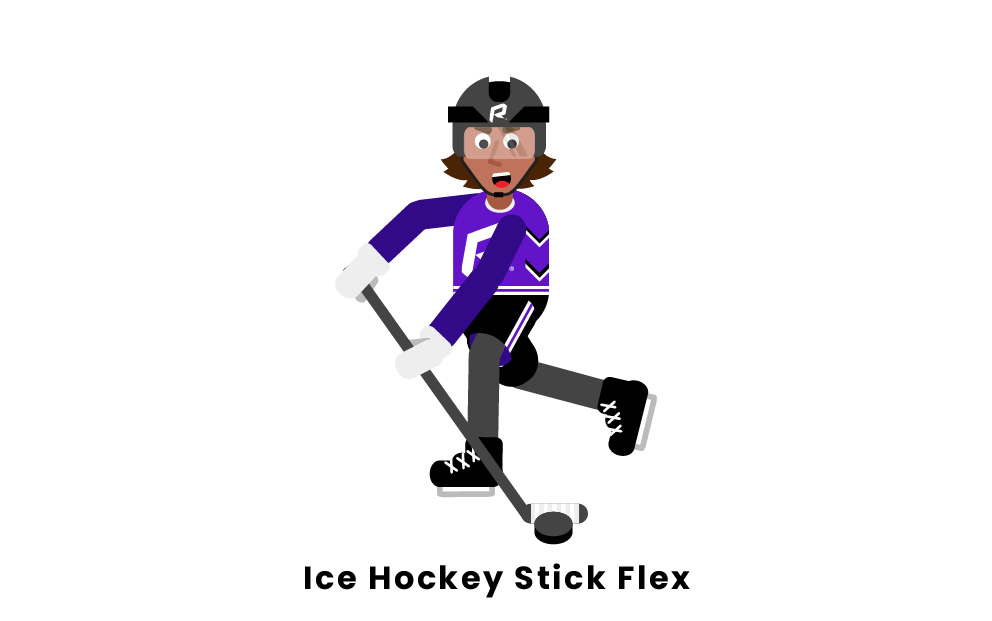 Hockey stick flex is the amount of bend that takes place in the stick when shooting. A higher flex rating on a stick will mean it is harder to bend, while a lower flex rating requires less force to bend.

When choosing a hockey stick, it is important to look at the flex ratings of the stick. It is often suggested that hockey players use a stick with a flex rating that is half of their body weight (ex. 200 lb player = 100 flex). After this, if a player would like a stick with more or less flex, they can adjust accordingly.

Hockey sticks are often categorized into different tiers of flex, which are as follows:

Youth sticks will typically have the lowest flex ratings, typically 40 flex and lower. Junior sticks have slightly more flex than youth sticks, and hover around 50 flex. Intermediate sticks have a higher flex rating than junior sticks but lower than senior sticks, and typically are made to be around 60 flex. Senior players have the option of using two different categories of hockey stick: regular and stiff flex. Senior regular sticks are usually around 85 flex, while senior stiff sticks are 100 flex or higher. All NHL players use senior sticks, but are split between using sticks with regular and stiff flex ratings.

The flex of a hockey stick can impact several aspects of play including the power and accuracy of the shot. If the flex is too low for a player, the stick may not be sturdy enough to support the power and speed of their shot. On the other hand, if the flex is too high, a player may have difficulty bending the stick and creating power on their shot.

What flex should I use for hockey?

Players often start off by selecting a hockey stick with a flex rating that is half of their body weight. However, this is not always the optimal flex for a player based on their playing style. If a player prefers to take quick wrist shots, a lower flex stick may be better for getting the puck quickly off the blade of their stick. A higher flex stick may be better for players that prefer to take powerful slap shots.

What flex do NHL players use?

With the fast pace of the game today, many NHL players are opting for lower flex rating sticks so that they can snap the puck more quickly off their sticks. One of the NHL’s best players, Alexander Ovechkin, uses an 80 Flex CCM Hockey Stick. Although Ovechkin weighs around 235 pounds, the flex of his stick is much less than half of his body weight. Another star player, Connor McDavid of the Edmonton Oilers, uses an 85 Flex CCM Hockey Stick.

Hockey stick flex can also affect the accuracy of a shot. If a player is using a stick with a flex that is too low, their shot may be less accurate and feel out of control due to the lack of strength in the stick. A stick that has a flex rating that is too high for a player may help increase accuracy because the sturdiness of the stick can help increase the stability of the shot.