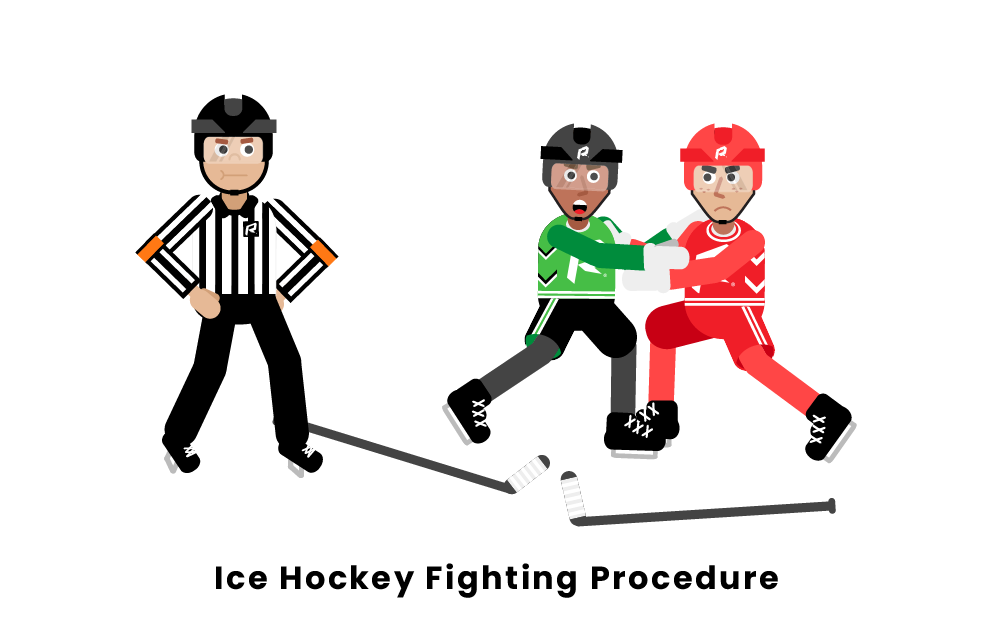 In hockey, fighting occurs when two players engage in physical combat on the ice, often as a result of a dispute between them. Fighting is considered a punishable offense in hockey and often carries a penalty. However, due to the large number of fights that occur in hockey matches, there are a number of unspoken rules surrounding fighting, and generally, fistfights are allowed to go on.

Fighting is a penalty in ice hockey that occurs when two or more players engage in a physical brawl during a match, usually throwing punches at each other. Fighting often occurs as a result of a dispute between players, such as over certain plays, disagreements over whether one player committed a foul, or even a personal dislike of one another. Almost all hockey leagues have strict rules against fighting, but some are broader than others. In the NHL, a fight is considered to have occurred whenever one or more players punch or attempt to punch another player or when two players grapple in such a way that the referee cannot easily separate them.

Though fighting is frowned upon in the NHL, referees are given a wide latitude of penalties which they can impose for it, allowing them to take into account the various factors which led up the fight, such as the participants, the instigator or aggressor, and whether both players intentionally continued the fight regardless of intervention.

Some leagues also have strict rules against fighters deliberately removing their helmets prior to a fight. Despite the various penalties associated with fighting, fights are often allowed in major league hockey matches, such as in the NHL. There are unspoken rules between players that govern fights. For example, many players consider fighting acceptable if they are standing up for a teammate who the opponents targeted, and many teams often threaten to target an opponent's players if they refuse to fight.

Since fighting is considered a penalty in hockey, all leagues have rules stating which punishments are appropriate for fighting. In the NHL, the standard punishment for fighting is a major penalty, along with a minor penalty and a game misconduct penalty for the instigating player. However, many other rules and penalties govern the various types of actions that can occur in a fight, such as clearing the area of a fight, removing helmets, fighting off the playing surface or before and after the game, or fighting before the drop of the puck.

Unlike the NHL, other hockey leagues have much stricter rules against fighting. In the NCAA, fighting is simply defined as a punch thrown and automatically incurs disqualification for the fighter or fighters who throw punches. In USA Hockey, Rule 615 declares that any player who participates in a fight will receive a major penalty and a game misconduct penalty, with an additional minor penalty for the player instigating a fight. Players can receive a minor, double-minor, or major plus game misconduct penalty for continuing a fight. 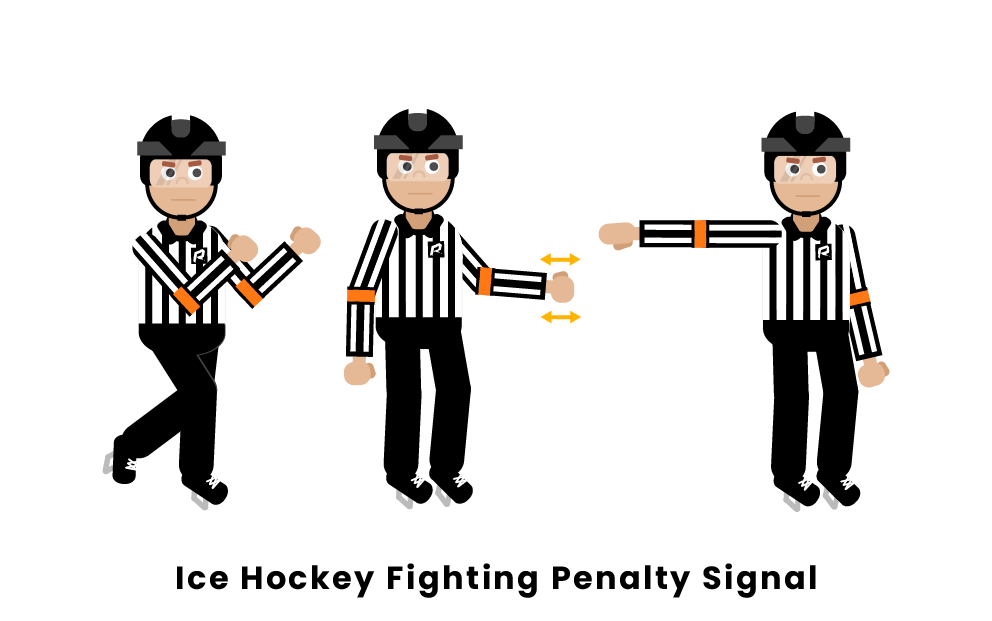 There are three types of fighting signals used in ice hockey. In the NHL, fighting is signaled when the referee clenches his fists side-by-side in front of his chest. In the NCAA, fighting is signaled by a double "punching" motion with the fist clenched and fully extended in front of the body. Finally, referees in youth hockey leagues often signal fighting penalties (or “roughing”) by using the non-whistle hand to make a punching motion to the side, with the arm extending from the shoulder.

What is a fighting penalty in hockey?

Fighting is a penalty in hockey that occurs when two or more players enter into a physical brawl with each other. Fighting often occurs as a result of a personal dispute between two players, either over some misconduct towards another player or personal dislike. Though fighting is against the rules in all levels of hockey, some leagues permit fights to go on as part of the culture of the sport, and there are certain unwritten rules to hockey fighting that do not exist in other sports.

What are the consequences for fighting in hockey?

Fighting is a penalty at all levels of hockey. In the NHL, fighting incurs a major penalty, along with a minor penalty and game misconduct penalty for a player who instigates the fight. In the NCAA and NFHS, fighting results in an automatic disqualification for the fighters, while in USA Hockey, it is a major plus a game misconduct penalty, with a minor for instigating, and a minor, double-minor, or major plus game misconduct penalty for anyone who continues a fight. Most leagues also have rules for various other aspects of fighting, such as removing helmets, not clearing the area during a fight, or fighting beyond the timeframe or location of the match.

Why is fighting allowed in hockey?

Fighting is sometimes “permitted” to go on in hockey because brawls have become part of the culture of the sport. As a very physical game, hockey once often included staged fights between players who were only sent into the game to fight. That being said, recent increases in the severity of fighting penalties have changed the rules slightly. However, many players still consider it bad form for one to walk away from a challenge to fight, and most players engage in fights as a way to stick up for teammates whom they feel have been mistreated by opponents. This fighting culture has led to referees in certain leagues, like the NHL, having wide leeway in the penalties they can dole out for fighting.