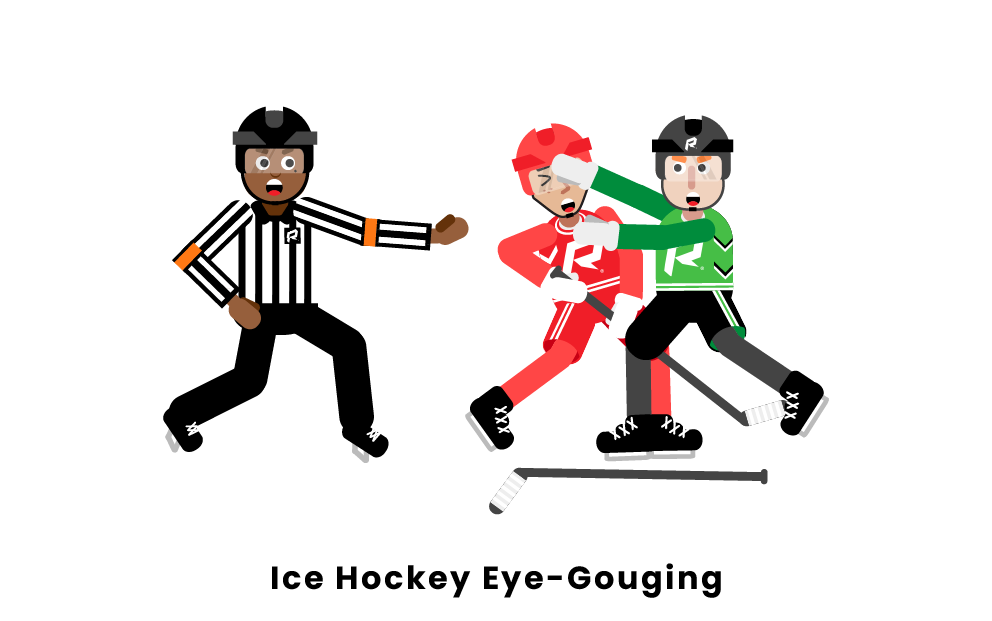 In ice hockey, eye-gouging almost exclusively occurs during fights, where two or more players get into a brawl during gameplay. Eye-gouging occurs when, during grappling, one or both players put their hand over the other's face and attempt to use their fingers to poke, prod, or otherwise injure their opponents' eyes. Under most hockey league rules, eye-gouging is a penalty that falls under the general category of "attempt to injure."

In ice hockey, especially at the professional level, players who have disputes on the ice occasionally get into fistfights during matches. While fighting is illegal under most leagues' rules, in many cases, it is allowed to go on for some time before penalties are issued. However, on occasion, two players who are fighting will attempt to eye-gouge each other, meaning that they will use their fingers to poke or scratch at their opponents' eyes. This type of fighting is very dangerous, and in professional leagues like the NHL, eye-gouging is both a penalty and grounds for further action beyond gameplay such as suspension.

In the NHL, eye-gouging falls under the category of "attempt to injure," which covers various penalties such as boarding, butt-ending, clipping, spearing, and slashing, among many others. However, because eye-gouging can be extremely dangerous to a player's eyes, potentially resulting in severe injuries, it is often met with harsher punishments than other "attempt to injure" penalties. For example, various hockey players have been fined or suspended for eye-gouging, including one player in a UK hockey league who was suspended 47 games for eye-gouging.

In non-professional leagues, such as the NCAA and USA Hockey, eye-gouging is treated similarly to other illegal contact penalties, but there are no official rules mentioning it. Instead, it is considered together with most "attempt to injure penalties," such as head-butting or grabbing a facemask, which are often met with immediate disqualification from a game.

Eye-gouging earns a match penalty in most hockey leagues, which is essentially an ejection from the game, though it is written in official books as a ten-minute penalty. In the NHL, any deliberate attempt to injure earns a match penalty, while in the NCAA, NFHS, and USA Hockey, attempts to injure are usually grounds for immediate disqualification, if not a major penalty. In many leagues, suspensions and fines are also common for penalties such as eye-gouging. 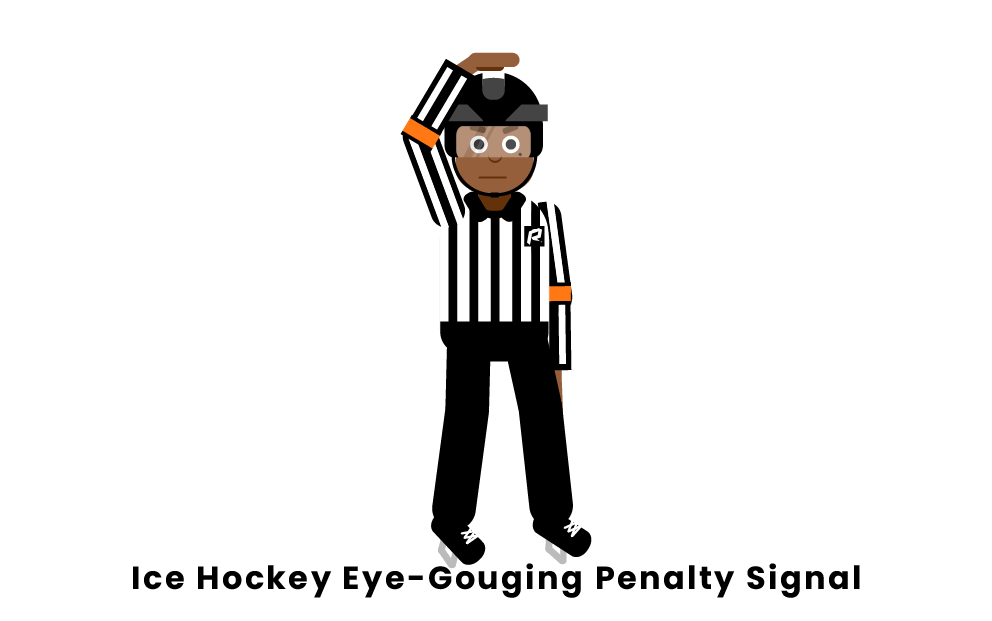 There is no official signal for eye-gouging in hockey, as the practice falls under most "attempt to injure" penalties. However, because eye-gouging results in a match penalty, the common signal that will follow it is the match penalty signal. An official will indicate the offending player or players and pat the top of their head with the palm of one hand. This signals that the penalized player or players have been ejected from the game.

What is an eye-gouging penalty in hockey?

In hockey, eye-gouging is a penalty that occurs when one or more players attempt to poke or prod another player's eyes during a match. Eye-gouging often occurs during fights, when two players are brawling during the match. Since it can result in serious injuries, eye-gouging is heavily frowned upon in hockey and often results in severe penalties both during a match and beyond. Players found guilty of eye-gouging in hockey may receive punishments such as fines or suspensions for deliberate attempts to injure another player.

What is the punishment for eye-gouging in hockey?

In most hockey leagues, eye-gouging is punishable by immediate ejection from the game. In the NHL, eye-gouging can be either a major or match penalty and often leads to further action such as suspensions or fines. In the NCAA, eye-gouging and other "attempt to injure" penalties often result in major and game misconduct penalties, as well immediate disqualification. This is also true in NFHS hockey and USA Hockey youth leagues, which punish attempts to injure other players with immediate disqualification from the game.

Is eye-gouging a match penalty in hockey?

Yes, eye-gouging is considered a match penalty in hockey. In the NHL, players are routinely ejected from matches as a result of eye-gouging, as eye-gouging can cause severe injuries. In fact, multiple NHL players have been suspended for one or more games as a result of eye-gouging, such as Steve Ott, a player for the Dallas Stars, who was given a match penalty and a one-game suspension in 2009 for gouging the eyes of Anaheim Ducks player Travis Moen during a post-game fight.