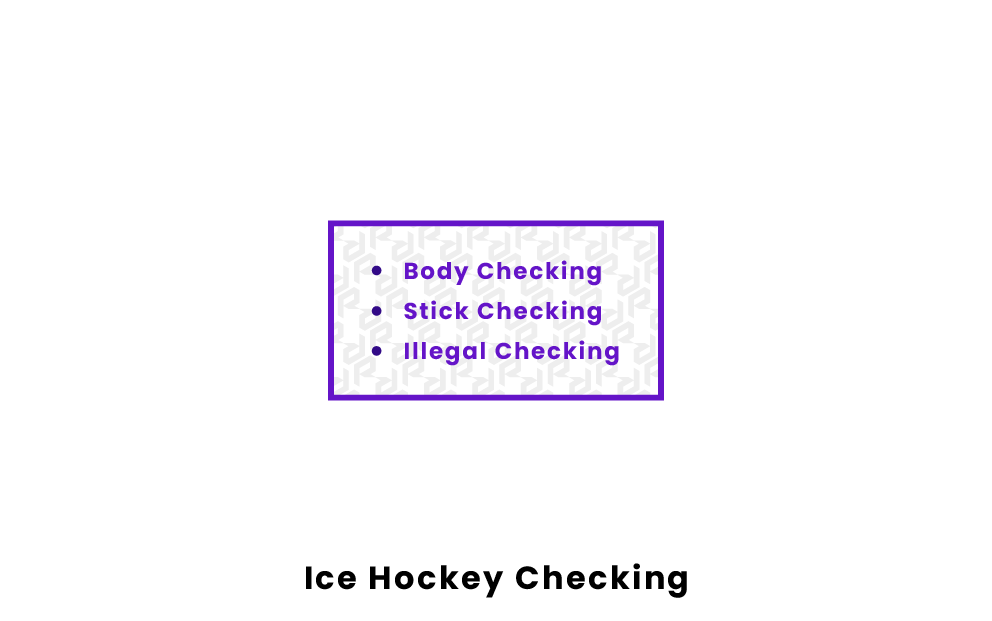 Checking refers to any defensive techniques aimed at separating the puck from an offensive player who is currently in possession. There are several different types of checks in hockey. The two main categories of checking are body and stick checks.

Body checking refers to any type of check that is initiated through contact with the body. Body checking is highly regulated at all levels of hockey because body checking is the root cause of most hockey related injuries. Most youth hockey leagues do not allow body checking. However, body checking is allowed in leagues from high school to the professional level, and is a vital part of the game.

Hockey players cannot be afraid to be physical. Physicality can be the reason teams win games. At experienced levels of hockey, every good defense will have players that are exceptional at body checking. Body checks can change the momentum of the game. First, fans love a great hit and they will upload loudly, raising team morale and energy. Moreover, an exceptional body check will cause a turnover. A quick change in possession can lead to tremendous scoring chances. Below is a list of legal body checks:

A sweep check is when a defender sweeps their stick across the ice in a broad motion to try and swipe the puck away from a defender. Sweep checks are impossible to execute in a head on battle because the defender will most likely trip the offensive player, resulting in a penalty. That is why sweep checks are often used by forwards who are approaching an offensive player at an angle. Sweep checks are also utilized to force a defender out of position. The sweeping motion of this type of stick check blocks passing lanes, hindering an offense's chances of scoring.

A lift check is when the defender purposefully lifts the stick of an offensive player off the ice in a quick motion to steal the puck from underneath. This technique is hard to pull off so it is usually conducted by a defender as a surprise. Lift checks mostly occur when the defender is trailing behind the offensive player. Lift checks can also be effective when two opposing players are chasing after a puck. The player who arrives a tad later may lift their opponent's stick and steal the puck away.

The press check is when a defenseman presses their stick down upon an offensive player's stick to disrupt their range of motion and steal the puck away. This technique is exactly opposite a lift check and occurs mostly in front of the net. When a player is approaching the goal, it is vitally important for the defense to limit their range of movement. Press checks enable the defense to slow down the offensive player and hinder their chance of scoring.

Illegal checks are types of hits that are banned from hockey leagues and result in serious penalties for the offender. Any form of body checking is illegal if a player does not have possession of the puck. Also, any hit above the shoulders or to the head will automatically be considered a penalty. Types of illegal checking include:

Cross-checking is when a defender holds their stick with both hands and uses the stick to hit the offensive player. Cross-checks are extremely illegal and can cause serious injury. A player can in no way use their stick to hit another player.

Charging is when a defender gears up for a hit by taking three or more strides, or when a defender leaves their feet when hitting another player. Charging will be called when a player's intent to hit is to purposefully cause harm.

What is tripping in hockey?

Tripping is when a defender uses their stick or any part of their body to purposeful cause an offensive player to lose balance. Tripping results in an automatic penalty, since serious injuries can occur when players are tripped skating at full speed. Most often, tripping penalties occur during break-aways when a defenseman is trailing behind a player with the puck. A defender will purposefully trip the offensive player to limit a one-on-one scoring opportunity with the goalie.

What is hooking in hockey?

Hooking is when a defensive player uses their stick to tug at the offensive player and gain a positional advantage. Hooking is considered illegal and may result in varying levels of penalties. A penalty for hooking may also be called if a defender uses their hand to pull on the body or jersey of an offensive player. Hooking destroys the flow of a hockey game because a player's movement becomes severely limited.

How do I teach the proper form of body checking?

Coaches must always stress the importance of safety when it comes to body checking. Body checking requires proper balance and stick placement. Players must learn how to skate backwards before they are ready to learn body checking techniques. However, it is vitally important to teach hockey players at a young age to keep their head on a swivel to be prepared for oncoming defenders.

When can you body check in hockey?