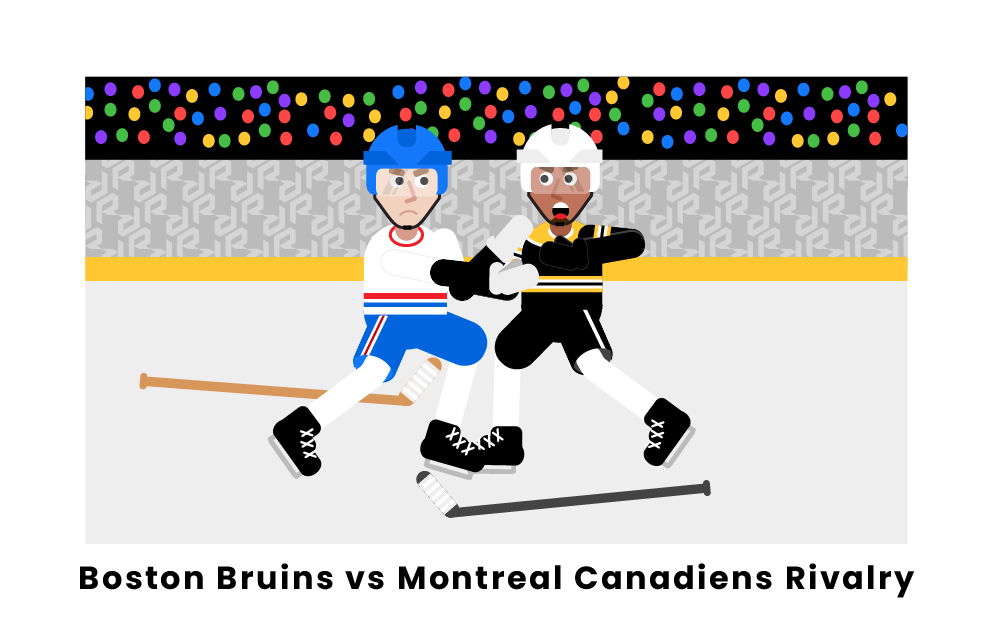 The most intense and longest-lasting rivalry in NHL hockey is between the Boston Bruins and the Montreal Canadiens. These two teams have played each other more times than any other pair of NHL teams. The rivalry has caused several incidents of violence and an infamous riot.

The rivalry between the Boston Bruins and the Montreal Canadiens is considered to be the most bitter and heated in all of NHL hockey. By the numbers, they have met more times in the regular season and playoffs than any other pair of NHL teams. In these meetings, the Canadiens have maintained the advantage, beating the Bruins in regular-season wins, postseason wins, and Stanley Cups, making this one of the more one-sided rivalries in sports.

A quick exchange of Stanley Cup wins ignited the rivalry at the beginning of the 1930s. Boston won their first championship in 1929, knocking the Canadiens out in the semifinal. In 1930, Montreal took the Stanley Cup away, defeating Boston in the final. The following year, Montreal successfully defended its title after knocking out the Bruins in the semifinal. Later in the decade, the rivalry's continuation was ensured when a 1938 realignment moved the teams into the same division; they are still division rivals today.

Bench-clearing brawls have been a staple of this rivalry, but several episodes of exceptional violence have occurred during meetings between the teams. One, in 1955, left a referee unconscious after attempting to break up a fight. The resulting suspension of Canadien Maurice Richard caused a riot by fans. In a more recent event, Bruins captain Zdeno Chára dangerously checked Canadien Max Pacioretty in 2011, causing a severe season-ending injury.

The rivalry has cooled in recent years with fewer playoff appearances, but fans of both teams are always eager for a meeting. There was excitement in both cities in late 2021 when the teams met for the first time in almost two years following a temporary realignment to accommodate pandemic restrictions.

Canadiens at Bruins on March 13th, 1955: Maurice Richard attacked Hal Laycoe of the Bruins with his stick in retaliation for a high-sticking earlier in the game. When a referee intervened, Richard punched him. Richard's resulting suspension caused the Richard Riot four days later.

Canadiens at Bruins on May 25th, 1978: Led by coach Scotty Bowman, the Canadiens defeated the Bruins at home in the sixth game of the Stanley Cup Finals, winning a second consecutive championship after sweeping the Bruins in the finals the previous year.

Bruins at Canadiens on March 8th, 2011: In the second period of a hard-fought Montreal victory, Bruins skater Zdeno Chára checked Canadien Max Pacioretty into the edge of the boards, leaving him unconscious and bleeding from the head.

Maurice Richard: [Canadien right-wing from 1942-1960] A physical forward for the Montreal Canadiens, Maurice Richard helped the team win a record-setting five consecutive Stanley Cups during the 1950s. He was once suspended for punching a referee, resulting in a riot by fans.

Zdeno Chára: [Bruins defenseman from 2006-2020] Serving as team captain for all of his 14 years playing as a defenceman for the Bruins, Zdeno Chára led them to a Stanley Cup championship in 2011. He infamously injured Canadiens player Max Pacioretty by hitting him during a game.

Bobby Orr: [Bruins defenseman from 1966-1976] One of the greatest defensemen and hockey players of all time, Bobby Orr played for the Boston Bruins in the 1960s and 70s, helping them win two Stanley Cups.

Why are the Boston Bruins and Montreal Canadiens rivals?

The Boston Bruins and the Montreal Canadiens are rivals because the Bruins defeated the Canadiens in the playoffs on the way to their first championship in 1929. The Canadiens struck back, winning the next two Stanley Cups at Boston's expense. Their presence in the same division has allowed more meetings than any other pair of hockey teams, allowing the rivalry to grow ever since. The Canadiens' dominance adds to the rivalry's intensity, with Boston always chasing Montreal's lead.

When did the rivalry between the Boston Bruins and Montreal Canadiens start?

The rivalry between the Boston Bruins and Montreal Canadiens started after the 1930 Stanley Cup Finals. The Bruins were the defending champions, and the Canadiens defeated them, winning the first two games of a best-of-three series. The Bruins had beaten the Canadiens in the 1929 Semifinals, and the Canadiens returned the favor in 1931, knocking out the Bruins in the Semifinals on the way to their second consecutive Stanley Cup championship. In 1939, a realignment moved both teams into the same division, fueling a heated rivalry that has continued since then.

Why are the Canadiens called the Habs?

The Canadiens are called the Habs because it is an abbreviation of Les Habitants, the French term for the 17th-century settlers who populated New France, an empire whose territory covered much of what is today eastern Canada and the United States. Les Habitants is one of several nicknames the Canadiens are known by; others include Le CH, Le Tricolore, and Le Grand Club. Some have incorrectly said that the H on Canadiens jerseys stands for habitants. In fact, the CHC logo is an abbreviation of le Club de Hockey Canadien, the team's official name.