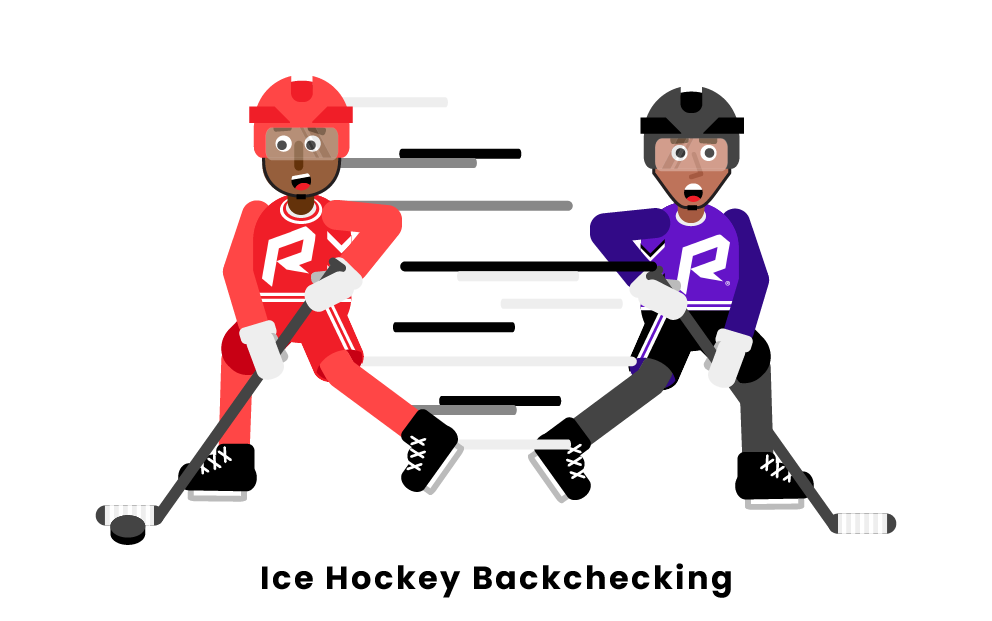 Backchecking in ice hockey refers to offensive players chasing after the player with the puck in order to transition possession. When backchecking, it is extremely important for players to keep their feet moving in order to stay with the player in possession of the puck, but also so that they do not get called for a flat footed penalty. These penalties refer to when a player stops moving their feet, and uses their stick or body to try and gain possession. Two great examples of this are tripping or slashing. Very often players can be seen to lazily cause penalties rather than move their feet and get in position to take the puck properly. It is also important that players push the opposing team to the outside of the ice, therefore giving them a disadvantage, and making it harder for them to accurately shoot on the net.

Backchecking is crucial to a team's success in ice hockey, because it is the main defensive tactic that teams use when the other team is transitioning down the ice. Because hockey is so fast paced, capitalizing during a transition is extremely important. Backchecking is also extremely important because it can stop a goal from happening. Backchecking is used when a team is moving into their offensive zone, and therefore if the defensive team can stop this momentum, they can decrease the chances of getting scored on.

What is the difference between forecheck and backcheck?

The main difference between a forecheck and a backcheck is the location of the players on the ice at the time. Forechecking occurs in the defensive zone of the player carrying the puck, while backchacking occurs in a transitional space, as the player with the puck moves towards their offensive zone. As an opposing player in forechecking you are trying to force a turnover and score, and for backchecking you are attempting to force a turnover so that the other team can't score.

What hits are legal in hockey?

Both body checking and hip checking are considered legal in hockey. Body checking is when a player hits the player in possession of the puck with their upper body, meaning their shoulders, and for hip checks this involves the use of their hips. All checking must be located above the knees of the opposing player, in order for it to be considered legal and not clipping which is illegal and considered very dangerous.

Is hip checking allowed in the NHL?