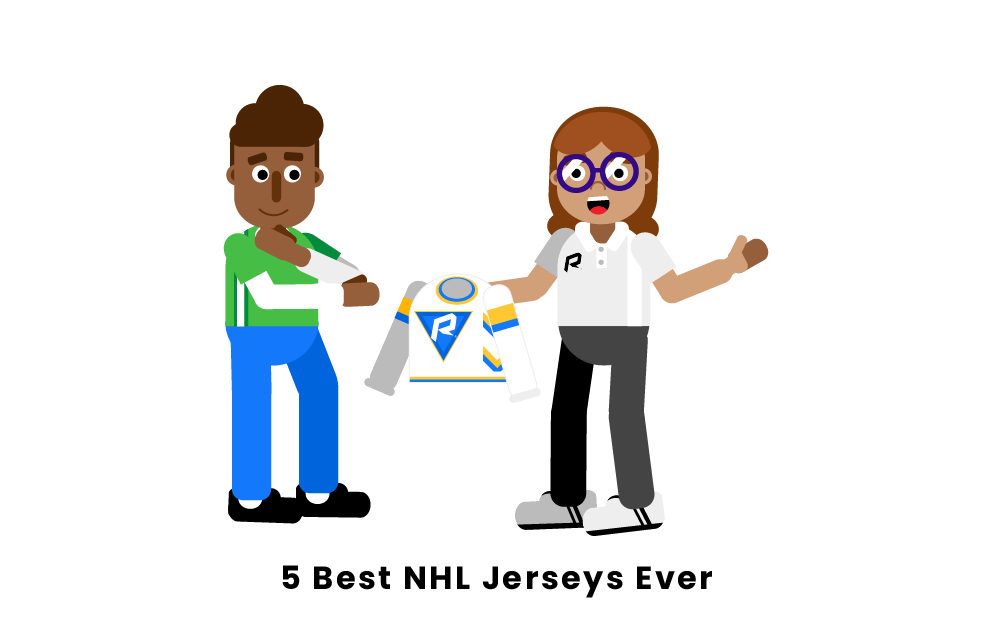 What are the most popular NHL jerseys ever?

These Anaheim Ducks Jerseys are some of the most classic jerseys in all of sports. This jersey was worn from 1995 to 2006. This teal and eggplant colored jersey is also one of the nicest jerseys out of all the NHL expansion teams. The jersey has a duck in a goalie mask on the front of it, with two hockey sticks in a cross formation behind the duck's face. The top half of the jersey is white while the button half is teal, separated by a black and silver stripe.

The team was named after the Disney film, "The Mighty Ducks" and this nhl jersey became very popular largely because of the popularity of the movie. The league decided that the Mighty Ducks logo was among the top ten in all of the NHL's long history. These interesting jerseys have a wonderful color scheme bringing nostalgia to many hockey fans.

Many fans may find this uniform to be ugly simply because it is a lime green color, but the Hartford Whalers' navy and lime green jerseys that were worn during the early 1990s are both historic and novel. The jersey has the Hartford Whalers logo on the front of the jersey. The logo is a "W" with a whale's tail over top of it creating the outline of an "H" in the center.

The Whalers were initially located in Boston and were called the New England Whalers, but after they relocated to Hartford, CT, they obtained the new logo. The team was named the Whalers because whaling was a major industry in Massachusetts. The team did not win much and eventually they moved to North Carolina being renamed the Carolina Hurricanes. The Hurricanes still wear the lime green Whalers jersey as a realtor-jersey.

The Phoenix Coyotes' Kachina jerseys are considered to be one of the best NHL jerseys of all time. These jerseys worn from 1996 to 2003 were recently voted the best jerseys in Arizona sports history. The Kachina jersey is considered to be eccentric enough to catch to eye but charming enough to wear while playing on the ice. They were worn during the team's longest stretch of success in franchise history when they reached the playoffs during 5 of their first 6 seasons. This jersey has even been selected over the past two years as the teams' uniform option for throwback game nights.

These jerseys come in both a black and white based color. Both jerseys are accented with green and red, which were both their more recognizable colors during the late 1990s and early 2000s. This jersey did not see a large amount of support in its early days, but today it is loved by fans across the country.

The San Jose Sharks Retro Jerseys are well-known classic jerseys that are considered to be some of the best ever worn. These were the first Sharks jerseys ever worn by the franchise from 1991 to 1998. They broke new ground for hockey fans during this time as people instantly fell in love with the bizarre color scheme. The franchise sold thousands of jerseys to fans from the minute they were released.

These jerseys have a combination of white, grey, and black coloring with teal being their most unique and recognizable color. This daring color is paired with a striped stitching design that is fairly traditional, which balances out the overall look of the jersey. The franchise was concerned about changing the design from the traditional look because they thought that introducing too many new jersey aspects at once might come off as strange to fans. This jersey manages to remain classic and modern at the same time.

The Boston Bruins is a NHL team that has been around for a long time and has won many championships. The team's long history and many great successes have left a number of great retro jerseys for the team to wear currently. One retro-jersey has the boston bear logo from the 1925 season which is intimidating along with the black jersey color and yellow highlights.

Not many of the Boston Bruins Uniforms have the bear logo on the front and many fans love the display of the bear on this jersey being it makes the team look more fierce. It is important to note that the rest of the jersey is rather plain which makes the bear on the front the main focal point for people looking at the jersey.

What is another name for a hockey jersey?

Hockey jerseys are sometimes referred to as sweaters by players, fans, and franchises. The term sweaters stems from the thick woolen sweaters that used to be worn by players to keep warm during hockey games. There has been debate about whether the garments that are pulled over padding are called jerseys or sweaters, but both are acceptable terms. The name is debated because players now wear garments that actually help them to keep cool while playing rather than keep them warm.

There are many places that fans can buy hockey jerseys. One of the most trusted businesses to purchase from is the NHL. The NHL has one of the largest selections of jerseys which sometimes includes throwback and special occasion jerseys. Jerseys can also be purchased from many large retail sports stores as well, such as Dick's Sporting Goods, Adidas, and Modell's Sporting Goods. They can also be bought at smaller hockey specialty stores and other large retailers.

Reebok is the official manufacturer of NHL hockey jerseys and they sell 3 different kinds of jerseys. The Reebok EDGE Authentic jersey is the best option for players looking for high-quality materials to support their favorite teams. They sell between $250-$330. Reebok Premier NHL jerseys replicate the look of authentic jerseys at a price of $125-$170. Reebok Practice NHL jerseys are the most budget-friendly way to support your team for around $90. CCM Classic Replica jerseys are a vintage-style jersey that can also be bought around $100-$185.

Hockey jerseys are generally very expensive especially if bought new. Ebay can be a great place to get used jerseys for cheap or even new jerseys which are on sale. There are other great websites which sell discounted jerseys. Hockeyjerseyoutlet.com saves fans between 10-50% off on many different Hockey jerseys. The website also sells many different other types of hockey apparel on sale.